This website requires the use of Javascript to function correctly. Performance and usage will suffer if it remains disabled.
How to Enable Javascript
World News Report: April 2014 – Inside the Mid-East Crisis 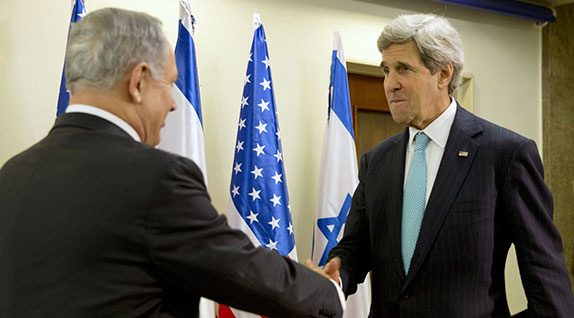 So much has happened in just one month in world events. Surely everyone is aware by now that the U.S.-mediated peace talks between the Palestinians and the Israelis have essentially collapsed. A very serious matter is developing on the world scene. Late last week, Israel halted the final (fourth) release of 26 Palestinian prisoners after hearing that Palestinian leader Mahmoud Abbas was only staying in the negotiations to manipulate Israel and get what he wanted. A report in Arutz Sheva stated, “Much of the objection to the fourth release came after the PA chief negotiator, Saeb Erekat, admitted earlier this month that…Abbas was staying in talks solely for the sake of the terrorist releases.”

Israel had already released 78 prisoners in three rounds of 26, but decided not to free more convicted murderers in light of the doubt cast on the motives of the Palestinians. Arutz Sheva went on to report about the Palestinians’ response to Israel’s decision: “The Palestinian Authority (PA) said Friday that Israel would regret its decision not to go through with the release of the fourth batch of terrorists it undertook to release as a ‘gesture’ to the PA…”

An April 29 deadline had been set for a final peace agreement to be reached, but it had fallen back to the hope that a simple “framework” could be agreed upon by this time. However, now talks look as if they might have collapsed well before April 29—while the Israelis wanted “another year” of negotiating to achieve final agreement. Daily reports outline the deteriorating conditions, with sometimes almost hour-by-hour press releases about all that is going wrong. U.S. Secretary of State John Kerry raced back to the Middle East on Monday to try to keep momentum in the negotiations. Again, his efforts appear now to have achieved nothing. In fact, he cancelled his Wednesday trip to the region after Abbas signed paperwork joining 15 United Nations organizations en route to a hoped-for unilateral granting of statehood by the UN General Assembly. All indications are that this will happen.

The biggest stumbling block to the negotiations has been the Palestinians’ steadfast refusal to acknowledge Israel’s right to exist. But they also want a capital in east Jerusalem and the “right of return” of all Palestinians driven from their homes decades ago. Since the Palestinians will almost certainly never recognize Israel, progress toward a real, lasting agreement appears impossible. John Kerry stated that mistrust between the two parties is at an unprecedented level: “‘The level of mistrust is as large as any level of mistrust I’ve ever seen on both sides,’ the American mediator John Kerry told a Senate panel in mid-March. ‘Neither believes the other is really serious. Neither believes the other is prepared to make some of the big choices that have to be made here…’” (The Jerusalem Report).

Only time will tell exactly how this will play out, but Bible prophecy does reveal there will be a significant ratcheting up of tensions in the Middle East.