This website requires the use of Javascript to function correctly. Performance and usage will suffer if it remains disabled.
How to Enable Javascript
Nowhere to Hide? – Terrorism’s Universal Threat

Will the fear of random acts of violence always hold us hostage? 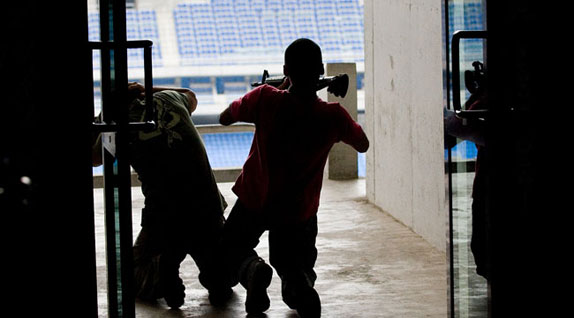 After years of cutting corners in his budget, a middle-class European has managed to save enough money for a once-in-a-lifetime vacation. At the airport, he goes through the formalities of checking in and soon finds himself in a seat taxiing down the runway.

In the aircraft, he makes himself comfortable. After an onboard meal, he watches a movie and tries to pass the hours by reading.

A few hours later he dozes off—only to be awakened by what sounds like a loud pop! Amid the commotion, the words “bomb” and “hijacker” filter through the aisles. Passengers are terrified at the thought of what is happening as a suspect is apprehended and dragged to the front of the plane.

In a moment, an act of terrorism transforms the calm environment of the jumbo jet cabin into an emotionally charged detention facility 37,000 feet above ground.

The attempted Dec. 25, 2009 bombing of Northwest Airlines Flight 253 made it clear that terrorism is a very real threat to the lives of average people. Such attacks can affect anybody, anywhere in the world and are not restricted to the United States alone. The threat—once mainly aimed against strategic targets—now looms over the entire population of whole nations.

Will the fear of terrorism hold us hostage forever?

The attempted bombing over Detroit raised new questions about national security and resulted in enormous expenses for nations wishing to protect themselves.

Since the attack, full body scanners and more trained security guards have been hired at airports around the world to aid in the search and prevent explosive devices from being smuggled onto planes. In Australia alone, the failed attempt to blow up the Detroit-bound plane resulted in an additional $173 million spent on internal security.

Seeking added ways to aid in the prevention of terrorism, the U.S. Department of Homeland Security launched a project using truck drivers. The First Observer Trucking Security Program, known as the “Eyes on the Road” program, was established to prevent terrorist damage to critical infrastructure such as bridges, tunnels and roads.

Enemies once kept outside a nation’s borders are now living among the populace. Citizens who sympathize with the cause of extremists can evolve into homegrown terrorists. Often, they train themselves via the Internet, but many sympathizers also train abroad with groups such as the Taliban or al-Qaida. It has become impossible to keep track of these groups as they form independent covert cells both in cities and rural areas.

The EUobserver reported that the number of arrests connected to terrorism have doubled in the European Union in 2007. The EU Anti-terrorism chief, Gilles de Kerchove said, “Al-Qaida is still and will continue to dominate international terrorism for years to come.” The EUobserver further stated, “Out of the total 1044 arrested last year, the vast majority was EU citizens suspected of membership in a militant organization. In cases of Islamic extremism, the would-be attackers appear to increasingly have been born in the union’s territory and having EU citizenship.”

The New York Times reported that the CIA warned that an attack will take place on American soil within the next six months. CIA director, Leon E. Panetta, said, “The biggest threat is not so much that we face an attack like 9/11 but it is that Al Qaeda is adapting its methods in ways that oftentimes make it difficult to detect.”

The lengths to which terrorists will go are limitless. British intelligence reports that terrorists have devised explosive breast implants designed to bypass airport scanners.

Speaking about the failed Detroit attack, Andrew Thomas, aviation expert at the University of Akron in Ohio, told The Christian Science Monitor, “The terrorists are constantly developing more sophisticated attacks. They are hyper-motivated, they’re not going to stop, and they have a fetish for aviation security.” The paper continued, “Meanwhile, the range of explosive devices that terrorists are developing is outstripping the ability of screening systems to catch them. Last August, an alleged suicide bomber who had explosives implanted in his body injured Saudi Prince Mohammed bin Nayef. Even controversial full body scans don’t pick up such hidden devices.”

The fear of terrorism affects all sectors of life. This especially applies to those who live in the West. The airline industry spends millions of dollars for extra security checks. Large corporations realize they are main targets of these internal militia groups and spend more money protecting and insuring their investments worldwide. The U.S. Department of Homeland Security projects that in 2010, $55.1 billion—a 4.9 percent increase over the 2009 fiscal budget—will be required to protect the country. This is almost a six-fold increase over the amount needed in 2000.

By crippling crucial resources, such as oil fields in the Middle East, terrorists attempt to destabilize the economies of Western nations that rely heavily on the constant flow of foreign oil. As a result, the cost to transport oil and protect supply lines is rising. These extra security measures drastically increase operating costs. Unable to absorb these losses, companies must rely on consumers to offset them.

Security agents work around the clock to prevent attacks planned by terrorists. Although they have achieved a certain measure of success in combating these crimes, it is impossible for them to protect everyone at all times.

Small terrorist cells operating across the world make keeping everyone safe nearly impossible—not to mention the fact that would-be-terrorists can purchase most ingredients to manufacture an effective remotely detonated bomb at any local hardware store. Such a homemade explosive, if placed in a populated area, would injure and kill many civilians.

With these terrorist cells randomly spread throughout a country, an attack can happen at any time. A terrorist that operates independently or is part of a self-proclaimed terrorist cell can easily blend into a crowd.

As these attacks occur with more frequency, some ask, “Why is this happening to us?”

After governments fail to prevent terror attacks—and seeing little that they can do to protect themselves—some turn to God for answers. They look in their bibles and read, “In righteousness shall you be established: you shall be far from oppression; for you shall not fear” and terror “shall not come near you” (Isa. 54:14).

Upon reading this passage, many become confused about how God is keeping people from terror. They ask, “How can it be that our security is under attack when God says that terror will not come near us?”

While God promises protection, He says that to be protected one must “do all that I speak; then I will be an enemy unto your enemies, and an adversary unto your adversaries” (Ex. 23:22). The results of obedience to God’s commands are clear. “There shall no man be able to stand before you: for the Lord your God shall lay the fear of you and the dread of you upon all the land that you shall tread upon, as He has said unto you” (Deut. 11:25).

By carefully reading this, it is clear that terror will not come near us if we obey God. Again, “In righteousness shall you be established.”

The results of breaking God’s laws are still playing out today. Note that terror attacks are generally directed against the English-speaking nations of the world—the United States, Britain, Australia, New Zealand and South Africa, and to some degree their allies and former colonies.

The English-speaking nations are the descendants of Joseph, a son of Jacob (Israel), which received the birthright blessings. Notice I Chronicles 5:2: “For Judah prevailed above his brethren, and of him came the chief ruler; but the birthright was Joseph’s.”

When God made the covenant with Abraham, He said, “And I will establish My covenant between Me and you and your seed after you in their generations for an everlasting covenant…” (Gen. 17:7). This means forever!

Our nations are in trouble because they have rejected God. “For they being ignorant of God’s righteousness, and going about to establish their own righteousness, have not submitted themselves unto the righteousness of God” (Rom. 10:3).

The seriousness of our transgressions screams at us from the pages of the Bible, but we refuse to hear. As Jesus states in Mark 7:9, “Full well you reject the commandment of God, that you may keep your own tradition.”

Most who have rejected the truth of Scripture believe that the terror attacks against us are merely a war between freedom-loving nations and rogue states. But what does God reveal about these attacks?

Leviticus 26 clearly explains what blessings God’s people will receive if they obey His laws. In the same chapter, God also defines what curses He will bring upon them for disobedience. “But if you will not hearken unto Me, and will not do all these commandments; and if you shall despise My statutes, or if your soul abhor My judgments, so that you will not do all My commandments, but that you break My covenant: I also will do this unto you; I will even appoint over you terror…” (vs. 14-16).

Will you consider the serious danger you face? There is only one way to find safety and security. Turn to the God who created you—the source of all blessings.

The siege against modern Israel—Britain, America and their sister nations—is due to disobedience. Our people have forgotten where they came from and who allowed them to prosper above all the other nations of Earth.

The terror that is spreading through the Western world is a direct result of disobedience and is prophesied to worsen. But God always warns before punishment comes, leaving no excuse. Those who heed His warning and obey His Law will “be far from oppression,” “shall not fear” and terror “shall not come near.”

What will you do to heed this warning? To learn more, read David C. Pack’s America and Britain in Prophecy.