This website requires the use of Javascript to function correctly. Performance and usage will suffer if it remains disabled.
How to Enable Javascript
New Face of the EU – What Does the Future Hold?

New Face of the EU

With the passage of the Lisbon Treaty and a leader at its helm, the European Union is poised to emerge on the international scene as a newly streamlined superstate. 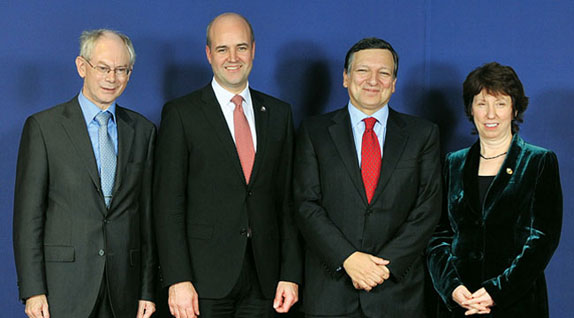 Amid fireworks, pomp and celebration, the European Union has finally taken a giant step toward full political integration. After a decade of mis-starts, political wrangling, failed referendums and several modifications, the Lisbon Treaty took effect on December 1, 2009, streamlining the European bloc’s decision-making process.

Upon coming into force, news media and world leaders assumed that the next steps of filling the positions created by the Lisbon Treaty would proceed slowly. But with a sudden flurry of events, the European Commission elected a two-and-a-half-year-term president and chose a high representative for foreign affairs—the equivalent of an ambassador acting on behalf of all 27 member-states of the EU in global matters.

The continent has come a long way—from six countries of several million people who formed a simple economic trade union in 1951, to a superstate of 27 countries consisting of 490 million people, and a GDP in 2008 of over $14.94 trillion.

More than ever, Europe is moving toward an identity as one unified superpower state rather than a fragmented continent, hindered by each country’s competing interests.

The decades-old European dream of becoming a kind of “United States of Europe” is fast becoming a reality, leaving many to wonder: what does the EU’s future hold?

On November 19, 2009, the European Council, the EU’s primary decision-making body, selected Herman Van Rompuy of Belgium as their first full-time president and Catherine Ashton of the United Kingdom as the new high representative for foreign affairs and security policy and vice president of the European Commission. The EUobserver said the “posts are supposed to give coherence to the bloc’s external policy and supply it with a stronger voice on the world stage.”

Mr. Van Rompuy was educated at the Jesuit Sint-Jan Berchmans College in Brussels, and studied philosophy and economics at the Catholic University of Leuven. He is described as “a man of profound faith and a firm believer in Catholic doctrine. He often goes on religious retreats to the Abbey of Affligem” (Flanders News).

While presenting a calm tenacity, Mr. Van Rompuy has effectively guided Belgium through some difficult political times for about a year as its prime minister. Seemingly plucked from obscurity, Mr. Van Rompuy was considered to be the “most consensual” figure for the European Council position. The Economist reported that the Council felt Mr. Van Rompuy would chair EU summits without overshadowing them.

Lady Ashton was selected because she is “capable” and “gets on with colleagues” (ibid.). She has limited experience, as she has never held an elected office, and has no real diplomatic practice.

European Commission President José Manuel Barroso “promoted Lady Ashton because, as a serving commissioner, she ought to be more loyal than a newcomer” (ibid.).

Although most were surprised by the relative no-name status of these two selections, it seems fitting that Europe would prefer less-polarizing figures for the first term.

Road to the Lisbon Treaty

During the last few decades, as the EU expanded, member-states negotiated and signed various treaties that modified aspects of their governing institutions:

Author Paul Belien, who has been acquainted with Mr. Van Rompuy since the 1980s, wrote in the Daily Mail that Mr. Van Rompuy’s “sole political ideal is the creation of a federal superstate, destroying national identities across Europe.” Mr. Belien has expressed dismay over a Europe based on the Belgian model, which in his view “lacks democracy, respect for the rule of law, and political morality.”

Although Mr. Van Rompuy has a reputation for being a peacemaker, he has fiercely defended Europe’s need to maintain its roots. In 2004, regarding Turkey’s possible entry into the EU, he said in a speech at the Belgian Parliament, “Turkey is not a part of Europe and will never be part of Europe…An expansion of the EU to include Turkey cannot be considered as just another expansion as in the past. The universal values which are in force in Europe, and which are also fundamental values of Christianity, will lose vigour with the entry of a large Islamic country such as Turkey.”

Ultimately, Mr. Van Rompuy will be as strong as the 27 leaders behind him make or want him to be. This new position paves the way for the “one voice” Europe has lacked on international issues that could rival the power of the United States president—especially since no provisions are made to stop the European Commission president from being elected president of the Council, effectively combining two leading positions into one.

New political faces are not the only change to the EU. Much of its decision-making process outlined by the Lisbon Treaty has been overhauled.

The EU website details the changes to the European Parliament and how it will affect the citizens of all 27 member-states.

Under the Lisbon Treaty, the EP will:

Concerning the changes, European Commission President José Manuel Barroso wrote in an editorial that the Treaty will positively affect the future of the EU.

“As the Lisbon Treaty comes into force, The European Union (EU) is, I believe, uniquely suited to take on its leadership responsibilities,” he wrote, later stating, “The European Union’s commitment to the multilateral system of global governance through the UN and other bodies is clear. We already speak with conviction and clarity on the major challenges that face us. The Lisbon Treaty allows us to achieve a greater coherence and gives us a much greater capacity to act. It will allow diplomacy, crisis management and an emerging European defence capability to be used hand in hand with more traditional policies such as trade and development” (Project Syndicate).

While Europe has taken a great step forward, it continues to face many challenges. Consider relations with Russia, vis-à-vis energy supply, trade with emerging-global-power China, relations with the United States, and the continued threat of domestic terrorism.

The EUobserver reported, “The EU has attempted to breathe new life into Middle East peace talks by calling for Israelis and Palestinians to share the sacred city of Jerusalem. ‘If there is to be a genuine peace, a way must be found through negotiations to resolve the status of Jerusalem as the future capital of two states,’ EU foreign ministers said in a joint statement.”

“Swedish foreign minister Carl Bildt said it was an encouraging sign of the EU’s political importance in the region. ‘It’s demonstrated that the voice of Europe does count,’ he said. ‘That our voice carries greater weight than we were perhaps aware of’” (ibid.).

Throughout Europe’s history, the continent has repeatedly united, sometimes under a single leader, as with Charlemagne, Otto the Great, even Napoleon. Also, during the Middle Ages, Europe aligned to preserve its shared ideals.

Gradually, Europe is again moving toward unification. With each additional amendment, the European Union has for 50 years piled treaty upon treaty. Finally, we have arrived at the quasi-constitution Lisbon Treaty.

A Brussels Journal article summed up this process as “Europe’s Slow-Moving Coup d’État,” also stating, “The history of European integration is a textbook case in how a simple economic treaty can be gradually transformed into an all-encompassing non-democratic supranational federal leviathan.”

Europe will ultimately reach great heights—and current events are creating a more unified European people who will soon be led by one powerful “voice” supported by another powerful—and empowering—religious voice.

As for how the Lisbon Treaty will affect Europe, news media, political analysts, and even EU representatives simply say, “We must wait and see.”

But with an increasingly multicultural Europe—with the Lisbon Treaty allowing for a future dual president of the European Commission and Parliament—with the continent leading the global economic recovery—Europe is poised to take the forefront on world affairs.

While exact details cannot be known, the broad strokes of Europe’s future are outlined for those who will listen.

The European Counterweight – Part 2: Will a Strongman Fill the Void?
Before it can assume the mantle of global preeminence, the European Union must face several daunting obstacles and challenges—including a drastic and startling change in government.