This website requires the use of Javascript to function correctly. Performance and usage will suffer if it remains disabled.
How to Enable Javascript
Profile: Finland – A Nation Caught in the Middle

A Nation Caught in the Middle

Historically, Finland has had to perform a diplomatic balancing act, which continues today. 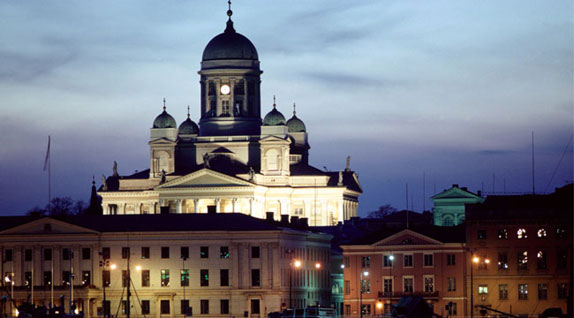 Internationally considered the “Switzerland of Scandinavia,” Finland is a country molded by its geographical location. With Russia to the east, and Sweden and the rest of Europe to the west, Finland has always had to perform a diplomatic balancing act throughout its past.

This balancing act continues at present and will into the future.

During the Middle Ages, Finland was a battleground between its two closest neighbors, Russia and Sweden. From the 12th century until 1809, it was largely under Swedish rule, which today continues to influence its culture, government and laws. During this time, Finland was considered only a group of provinces, with little sense of a national entity.

Not until the war of 1809 (which Sweden lost to Russia) did Finland become an autonomous Grand Duchy, under the control of the Russian emperor, as Grand Duke, whom the Governor General represented. Under this new governmental structure, the senate (filled with Finnish leaders) was the highest governing body and presented domestic issues directly to the emperor, leaving out other Russian authorities. These new freedoms of self-rule enabled much of the past Swedish influence to hold ground: Swedish (along with Finnish) remains the official language and the Lutheran Church retains its position.

Nationalism gained momentum as the Grand Duchy remained part of the Russian empire while enjoying extensive privileges, virtually making Finland a state within a state. Privileges included its own legislative assembly, and the power to elect local officials and maintain an army, currency, postage stamps—and even its own official border.

This was a sore point for Russian chauvinists (nationalists), who pushed for the Russification of Finland. This led to the “first era of oppression” (1899-1905), continued by a second era of oppression (1909-1917).

Finland had a brief respite during the Russian revolution of 1905, and a new legislative body replaced the former assemblies the following year—a pivotal point in Finnish history. This changed it from a four-estate diet to a unicameral parliament with universal suffrage. Finnish women were the first in Europe to gain the right to vote.

The new parliament approved its own declaration of independence on Dec. 6, 1917. A brief civil war followed as a breach between liberal and conservative parties became irreconcilable. Finland became a republic in the summer of 1919, and quickly developed during the 1920s, healing the wounds of the civil war. Public sentiment moved Finland away from communism, which took root in Russia. The Nordic nation initially pursued a foreign policy based on cooperation through the League of Nations. Yet the League’s inability to ensure world peace became evident in the 1930s, and Finland retreated to focus on Scandinavian-based policies.

Finland played a delicate balancing act between communist Russia and Nazi Germany during World War II. First, Russia attacked Finland in 1939—the “Winter War,” in which Finnish troops used the weather to their advantage and employed guerilla-war tactics to inflict massive casualties. Hostilities led to signing a peace treaty in the spring of 1940, with Finland losing part of its southeastern region to the Soviets. Shortly after Adolf Hitler’s “Operation Barbarossa” invasion against the Soviets, Finland entered the war allied with Russia. With great prowess, the Finns used their nation’s resources and geographical position to remain one of the few major European countries not occupied during the war.

After the Cold War began, Finland was once again caught between two great world powers: the East (the Soviet Union and its satellite nations) and the West (the United States and Western Europe). Finland maintained a neutral stance, which helped its international position grow stronger. It focused on diplomacy by joining the United Nations and Nordic Council in 1955.

Feudalism was never a part of Finland’s history, and the working class always retained its personal freedoms. These factors, along with early Swedish domination having had a strong influence in Finland’s legal and social systems, laid the groundwork for the liberal, democratic society Finns enjoy today.

The Finnish state has a mixed presidential/parliament system, with executive power divided between the president and prime minister. The parliament consists of a 200-member body of elected leaders that holds supreme authority; it can alter the constitution and bring about the resignation of the cabinet. Members of parliament are elected by proportional representation, which encourages a multitude of political parties, resulting in many coalition governments.

The Nordic nation is, for the most part, ethnically homogenous. Even though immigration has significantly increased over the past decade, foreign-born citizens constitute only 2.2 percent of the total population, a percentage much lower than any other member-state of the European Union. As a result, Finland has little ethnic tension, and the majority of Finns are Lutheran, a holdover from Swedish influence centuries ago.

The Finnish economy is largely free-market based, with a GDP similar to the United Kingdom, France and Germany. Key sectors of the economy are manufacturing, natural resources (primarily wood, metals and mining), engineering, telecommunications and electronics. Trade is crucial, and exports account for nearly two-thirds of the Nordic nation’s GDP.

Two decades after the collapse of the Berlin Wall, Finland still mandates universal male conscription, under which all men serve in the military for at least six to 12 months. Defense forces consist of 35,000 troops on active duty and 490,000 reserve personnel. With its long history of being positioned between two world powers, the country relies upon its military for survival.

Finland’s foreign agenda promotes effective multilateral institutions—the EU, UN, global economic forms, etc.—in which the most powerful nations are constrained by a rules-based world. Finland’s strategy during the last decade has been to maximize its international sphere of influence by securing seats at the right tables, such as joining the European Union. This has given the country a forum to sway European and global politics.

Nevertheless, Finland finds itself between the interests of the EU and a resurgent Russia—with both seeking to dominate world affairs. Despite its EU membership, Finland’s voice has become less certain within the now larger pan-European organization, no longer the tight-knit club of the original member-states.

Despite its current sociopolitical drift toward the West, Finland knows it cannot become complacent about Russia, which it now sees more as an opportunity than a threat.

However, these concerns cannot be left unaddressed. Finland currently focuses on a twofold strategy of not provoking Moscow (staying out of NATO), while supporting demographic reform among the Russians. Driven by the theory that liberal democracies do not fight wars against each other, Finland hopes to nullify any future threat from the East.

What the Future May Hold

Descended from one of the tribes of ancient Israel, Finland was foretold in the Bible to be caught in the middle: “Issachar is a strong ass couching down between two burdens” (Gen. 49:14). There has never been a point in history in which the nation has not been wedged between two “burdens” (nations or powers).

As both Russia and the European Union grow stronger and exert themselves on the world stage, Finland will face tough choices. Only time will tell if it can keep its neutrality and maintain its image as the “Switzerland of Scandinavia.”