This website requires the use of Javascript to function correctly. Performance and usage will suffer if it remains disabled.
How to Enable Javascript
Tony Blair – Former British Prime Minister

He is a staunch supporter of U.S. President George W. Bush, yet a firm believer in the European Union and its growing influence. Will Mr. Blair be the next heir to the EU throne? 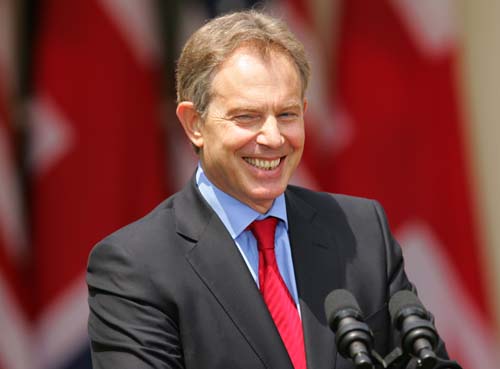 Much speculation exists about what Mr. Blair will accomplish next, but it is certain he will aim high. After leaving his post as prime minister and Parliament member on June 27, 2007, he was elected to represent the four key players in the Middle East Peace process: the European Union, United States, Russia and the United Nations. Following this appointment, JP Morgan Chase Bank hired Mr. Blair as an advisor.

Now as the EU prepares to form its own presidency in accordance with the Lisbon Treaty, Mr. Blair has announced his candidacy for the position. Even though there are several contenders, none seem to have as much clout as the former prime minister. If elected, he would become the EU’s first long-term president, serving a 2½-year term.

Mr. Blair’s career has been dominated by many “firsts.”

Born Anthony Charles Lynton Blair in Edinburgh, Scotland, on May 6, 1953, Mr. Blair was educated in elite private schools in England, Scotland and Australia. He attended the prestigious St. John’s College of the University of Oxford as a law student, where he specialized in employment and commercial law. There he met Cherie Booth, who was also studying law. They were married in 1980 and soon after appointed barristers.

It wasn’t until 1982 that Mr. Blair’s civic career began. After failing to secure a position in the Labour Party in Beaconsfield the previous year, he won a seat in the House of Commons for the constituent of Sedgefield in 1983. Mr. Blair’s political aspirations did not go unnoticed by Labour leader John Smith, who promoted him to Shadow Home Secretary following the 1992 election.

After Mr. Smith’s unexpected death in 1994, Mr. Blair, at age 40, won the support of his party and was elected its youngest leader. He quickly worked to modernize its platform, renaming it the New Labour Party. His progressive economic ideas, crime prevention methods and policies, including Britain’s membership in the European Union, wooed voters. He was elected British Premier following the party’s landslide victory in 1997—which put an end to 18 years of Conservative Party rule and gained the largest majority for the Labour Party in the House of Commons since 1935.

At age 43, Mr. Blair became the youngest prime minister to hold office since Lord Liverpool in 1812. He immediately began restructuring government systems in Scotland and Wales, giving more centralized power to the new Scottish Parliament and National Assembly for Wales.

Following Mr. Blair’s governmental reforms, he announced plans to revamp Britain’s National Health Service and education systems, which included requiring university students to pay tuition fees for the first time. Later, in April 1998, he directed negotiations that led to the Belfast Agreement in Northern Ireland. This accord created the Human Rights and Equality Commissions, approved the early release of terrorist prisoners, aided in the disarmament of Northern Ireland and reformed its justice system.

During the next several years, Mr. Blair slowly began to set his sights on resolving international issues. Although elected primarily for his stance on domestic policy, his term encompassed far more international matters, which may give him an advantage if he gains the EU presidency.

“The reality is increasingly that we are obliged as leaders to think, work and act internationally,” he told The Economist during an interview.

This mindset benefitted him throughout his run as prime minister. In 1999, Mr. Blair urged NATO to take a strong stance against Russia and oppose the actions of then-Yugoslavian President Slobodan Miloševic, which helped to disengage the crisis in Kosovo. He also pushed for tougher measures against Iran’s nuclear program.

The following year, he intervened in Sierra Leone’s civil war when he sent troops there to disarm rebel armies that threatened to topple its government—effectively preventing the country from complete collapse.

That same year, Mr. Blair experienced a “first” of another sort: He became the first prime minister since 1848 to become a father while holding office. The couple has two other sons and a daughter.

Due to his general reforms, he was elected to a second term of office in 2001. However, the turning point in Mr. Blair’s premiership came after America’s 9/11 attacks. He immediately rushed to aid the United States’ war on terror, promising to stand with Americans in their plight to bring al-Qaeda to justice.

“This mass terrorism is the new evil in our world today,” he said in a speech shortly after the attacks. “It is perpetrated by fanatics who are utterly indifferent to the sanctity of life and we, the democracies of this world, are going to have to come together and fight it together and eradicate this evil completely from our world.”

This act of aggression prompted Mr. Blair to join with American forces to invade Afghanistan, in an attempt to eradicate the Taliban.

While he was vying for military support abroad, the British people overturned the decision to join their currency to the European Union’s new legal tender. Mr. Blair strongly supported the measure, arguing it would further fortify Britain’s relationship with Europe.

“Many Brits are, understandably, reluctant to give up their centuries of uninterrupted political liberty and representative rule to merge with nations that in some cases were dictatorships only decades ago,” Justin Fox wrote in Fortune Magazine in 2001. “Many also identify more closely with the U.S. than with Europe.”

However, as the death toll of British soldiers continued to rise in the war with Iraq, the British began to resent Mr. Blair’s strong ties with America. This reached a head after his 2005 re-election to a third term, when al-Qaeda launched an attack on London, killing 52 people and injuring over 700.

Mr. Blair also continued to push for increased aid to Africa to help stabilize the continent, as well as for international reforms to prevent global warming, including the Kyoto Protocol. In 2005, he chaired the G8 summit, where all major powers agreed to cancel the debts of 18 nations and give an additional $50 billion in aid to Africa.

Following a ten-year term, Tony Blair was succeeded by Chancellor Gordon Brown on June 27, 2007. As a testament to his tenure, Mr. Blair declared, “This country is a blessed nation. The British are special, the world knows it, in our innermost thoughts, we know it.”

While Mr. Blair has been open about his personal life and hobbies, which include spending time with his children, reading literary classics and biographies, watching thriller films and playing guitar, he had remained silent on the issue of religion. Throughout his tenure, he firmly maintained that his personal beliefs were not for public knowledge—until some months after leaving office, when he publicly converted to Catholicism. This brought a wave a scrutiny from Britons who had anticipated the conversion since before he took office. Britain’s official religion is Anglican—started after King Henry VIII denied the pope’s authority in England and formed his own church in 1534. Since then, most government officials have adhered to the same faith.

Critics claimed Mr. Blair’s conversion was an attempt to further cement ties with—and gain the endorsement for EU president from—one of the most powerful religious institutions in the world, the Catholic Church.

Given the former premier’s relationship with newly-elected French President Nicolas Sarkozy and other world leaders, it appears that a run for the Brussels candidacy is imminent.

However, given his inability to unify the British people in the face of war, many have wondered if Mr. Blair is up to the task of governing the 27 individual member-states of the EU.

Before leaving office, Mr. Blair reflected in The Economist, “Europe and America share the same values. We should stick together. That requires a strong transatlantic alliance. It also means a strong, effective and capable EU. A weak Europe is a poor ally. That is why we need closer co-operation between the nations of the EU and effective European institutions. In a world in which China and India will each have a population three times that of the EU, anything else is completely out of date.”

Although some claim his emphasis on foreign policy may have prepared him for the position, it remains to be seen if Mr. Blair’s worldwide involvement will make him a popular candidate for the position—or if Britain’s often standoffish approach and alignment with the U.S. rather than Europe will disqualify him.