This website requires the use of Javascript to function correctly. Performance and usage will suffer if it remains disabled.
How to Enable Javascript
John Howard – Prime Minister of Australia

Considered an effective leader by some, an ill-advised ally of U.S. President George W. Bush by others, John Howard has been Prime Minister of Australia for more than 11 years. As the 2007-2008 election draws near, what will his current position spell for the future of Australia?

The year was 1996: Tired of broken promises, Australia’s population (18.25 million at the time) voted overwhelmingly to replace the liberal Australian Labour Party (ALP), which had held office since 1983, with the center-right coalition of the Liberal Party and the National Party. John Winston Howard, who led the coalition, became Prime Minister.

Born July 26, 1939, Mr. Howard first leaned toward a law career, but after obtaining a bachelors degree from the University of Sydney in 1961, and serving as a solicitor of the New South Wales Supreme Court, he quickly turned to politics. In 1974 he was elected to parliament as a member of the Liberal Party, and eventually served as Minister for Business and Consumer Affairs (1975-77) and Federal Treasurer (1977-83).

By 1983 John Howard was leader of the party.

In his personal life, Mr. Howard is a passionate fan of sports, particularly cricket. He also enjoys playing tennis and golf.

He has been married since 1971 to his wife, Janette, a teacher by profession, and together they have three adult children.

Australia’s economy was a primary focus during the 1996 election campaign, and played an integral part in Mr. Howard’s policy during his first year in office.

As promised, his Cabinet quickly began “cutting away the fat” of several Australian “institutions,” forcing the sale of one-third of the giant telecommunications monopoly Telstra, and reducing funding for the state-run Australian Broadcasting Corporation, universities and other federal cultural and foreign aid programs.

The first Howard budget laid out further cuts based on a looming financial disaster due to “Beazley’s Black Hole”—an $8 billion AUD deficit that had been concealed by the previous administration. 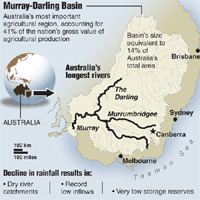 During the first few years as Prime Minister, Mr. Howard faced several challenges, including the formation of the opposing One Nation Party, which made considerable inroads peaking in the 1998 elections and national debates surrounding immigration and race relations.

Mr. Howard also undertook a more active role on the world scene, sending Australian troops to East Timor as part of a United Nations mission in 1999. That same year, Australia held a national referendum as to whether it should sever its historic ties to the United Kingdom, and become a republic. The referendum—which Mr. Howard opposed—failed to pass. Australia remains a federal parliamentary democracy, with Britain’s Queen Elizabeth II as the Chief of State.

In the area of social issues, Mr. Howard introduced law in 2004 ensuring that same-sex couples cannot legally marry. The law, according to the International Herald Tribune, even closed any potential legal challenge to the ban.

Despite a 2007 poll revealing that 71% of Australians believe homosexual couples should have the same legal rights as common-law heterosexual couples, Mr. Howard remained firm. He stated, “We are not in favor of discrimination, but of course our views on the nature of marriage in our community are very well known and they won’t be changing.”

From the outset, Mr. Howard has maintained close relations with the United States. In 2003 Australia contributed troops to the U.S.- and British-led war in Iraq. Despite accusations of misleading the public regarding the war, a 2004 government report cleared the Howard administration of any wrongdoing.

Relations with the People’s Republic of China have been increasingly important and complex. China accounts for 11.5% of Australia’s exports, and 13.7% of its imports. Relatively wealthy in natural resources, Australia has been an important source for China’s growing economy. However, conservative policies of Mr. Howard’s administration have increased tensions between the two nations.

For example, earlier this year Australia signed a defense pact with Japan, which the Christian Science Monitor described as “committing the two nations to cooperation on military, antiterrorism, and security matters.”

According to Bloomberg, Mr. Howard stated the declaration “represents a new dimension to our relationship and should not be seen as being antagonistic to anyone in the region,” but that “this will not contribute to an arms race or a military build-up in the region.”

Bloomberg pointed out that both Japan and Australia have security treaties with the U.S., and that the new Japanese-Australian pact called for strengthening cooperation among the three countries.

Another challenge for Mr. Howard has been that Australia is reeling from several years of drought.

Earlier this year Mr. Howard announced the government might ban the use of water from the Murray-Darling river basin for agricultural purposes. This water system contains the nation’s three largest rivers, and 14% of the landmass (similar to the size of France and Spain combined)—making it the most significant agricultural area in Australia. According to several sources, it generates approximately 40% of the country’s agricultural production, and is commonly called Australia’s “food bowl.” If water for irrigation were cut off from use in this area, it would spell the end to Australia’s agriculture industry.

The Independent (UK) stated the continuing drought has already cut total agricultural production by one-quarter, and the country’s GDP by 1%.

Reading from a commission’s report, Mr. Howard indicated that Australia was in “an unprecedented dangerous situation,” warning that “there will be insufficient water available to allow any allocation of the commencement of the 2007/2008 water year for irrigation…” He added, “…it will be sometime before we know the full extent of it and whether or not it will enable some allocation to be made.”

Despite Mr. Howard’s steadfast leadership and relatively successful tenure as Prime Minister, significant change is in the air. A federal election is expected sometime in 2007 or 2008, and current polls suggest Labour Party leader Kevin Rudd is maintaining a consistent preference.