The Restored Church of God  The Real Truth  The World to Come  WCG Background?

The time of year has again come for me to write a personal letter to all subscribers of The Real Truth™ magazine. As we look back on another calendar year, many signs of terrible decline on the way to collapse are everywhere. Man’s world—SATAN’S world!—is rapidly deteriorating! More thoughtful observers sense that conditions are spinning out of control. A growing number of voices are essentially admitting that society is not evolving but rather devolving—and nobody knows where it ends. This semi-annual letter will carry a number of quotes from the “thinkers” of this world. It paints a graphic year-end picture. The letter will also show the increasing size and scope of God’s Work. First comes a longer quote from a recent article. It is a loud and desperate plea for world leaders to bring “order” to the world’s crumbling structures:

“…Foreign-policy pundits have been pleading for something they call ‘world order.’ The international fabric is fraying, they fear. Whether it is mayhem in the Middle East, Russia’s seizure of parts of Ukraine, China’s pushy tactics in its extended coastal waters or the epidemic of Ebola in west Africa, the world is coming apart at the seams. In 2015 the call for order will be partly met but…the sense of impending chaos will endure.

“Just now the world seems uncommonly hard to manage. Citizens are fed up with the elites that govern them: Ukrainians rose up against their country’s kleptomaniac nomenklatura, students occupied Central district in Hong Kong and Europe’s populists, such as France’s National Front and the UK Independence Party, are plotting to overthrow the technocrats in Brussels. The jihadists of Islamic State (IS) threaten to wreak havoc in the Middle East and beyond. Whereas democratic governments seem weak and vacillating, authoritarians are busy arresting their opponents, muzzling their media and invading their neighbours. You know something is wrong when Henry Kissinger, the gravel-voiced elder of foreign-policy pundits, writes a book called ‘World Order’ warning that ‘chaos threatens’” (The Economist).

Subscribers, Almighty God will soon have to intervene and save humanity from itself. Jesus said of the final period just before His Return, “Except those days should be shortened, there should be no flesh saved [alive]” (Matt. 24:22). Before God’s intervention to cut events short takes place, world trouble will greatly intensify—and to STAGGERING PROPORTIONS! Nothing that has occurred—absolutely NOTHING!—over the past 6,000 years even remotely compares to what is yet to come upon this world! And now SOON. Civilization as we know it will completely change (and ultimately for the better), and nations and events will line up in a way that will stun an unsuspecting world. I must report that what will end in a way that will bring wonderful prosperity, happiness and benefit to all mankind will NOT start this way. Far from it.

We are seeing the front edge of increasing world troubles in today’s many disease outbreaks and intensifying famines. For instance, Ebola continues to spread across West Africa. The BBC reported, “The head of the UN Ebola response mission…has told the BBC there is still a ‘huge risk’ the deadly disease could spread to other parts of the world…” In Madagascar, the World Health Organization (WHO) reported that an outbreak of bubonic plague—BUBONIC PLAGUE!—has suddenly left 40 people dead and 80 others infected. Notice why the problem grew so bad: “The WHO warned of the danger of a ‘rapid spread’ of the disease in the capital, Antananarivo. The situation is worsened by high levels of resistance among fleas to a leading insecticide…” (ibid.). Where will just these two trends end? Then think of adult whooping cough, suddenly resurgent in America alongside the deadly enterovirus D68.

Another serious and worsening problem the world is battling is the crisis in Syria. The civil war there has led to a quiet but widespread hunger, as documented in a recent eye-opening 60 Minutes special. Here is an excerpt: “…the World Food Programme feeds 80 million people a year. Its greatest challenges come when it confronts war and hunger. And that’s what’s happening today in Syria where you will find heroes of the World Food Programme saving the most vulnerable people in what looked to us like the edge of oblivion. The map said, ‘no man’s land.’”

The report revealed that over one million people have fled from Syria into Jordan in the last three years. The special also showed how the Syrian dictator Bashar al Assad is using hunger as a most brutal and vicious weapon of war: “Part of what has stolen hope inside Syria is hunger. Starvation is a weapon in the war that began as an uprising against the dictator Bashar al Assad. These words [painted on a building] read, ‘kneel or starve.’ Signed Assad’s soldiers. All sides are laying siege to communities and cutting off the food. This is what happened in a neighborhood called Yarmouk when a U.N. food convoy broke through. The people had eaten the dogs and the cats and were running low on leaves and grass. This girl [shown being held by her father] eventually starved to death, five miles or so from a supermarket.” I could barely stand to look at the picture of that little girl referenced, knowing that it could be one of my little granddaughters.

The CBS program also explained that an estimated one million people are trapped in Syria, out of reach of the World Food Programme’s aid. And of course remember that Syria is only one small part of grander endemic problems racking the whole of the Middle East. Think of Iran, Iraq, Jordan, Egypt, Libya, Tunisia, the Palestinians and Jews, as well as ISIS and all other (seemingly endless) forms of jihadism. All of this is radiating out from these places deeper into Africa, Europe and North America, and almost everywhere else.

Next is drought, related to famine. Extremely dry conditions are occurring around the world, and conflicts over water are already likely beginning on the way to water wars. California is suffering its worst drought in 1,200 years—1,200 YEARS! Notice this report of conditions in Brazil:

“In Brazil’s biggest city [Sao Paulo], a record dry season and ever-increasing demand for water has led to a punishing drought…The main reservoir system that feeds this immense city is still dangerously low, and it would take months of intense, heavy rainfall for water levels to return to anything like normal…Brazil’s Jaguari reservoir has fallen to its lowest level ever…The nation’s two biggest cities are fighting for what little water is left…Supreme Court judges have summoned the parties to Brasilia for a mediation session this week. The standoff in a nation with more water resources than any other country in the world portends further conflicts as the planet grows increasingly urban. One in three of the world’s 100 biggest cities is under water stress, according to The Nature Conservancy, a U.S.-based nonprofit” (Bloomberg).

Then there is the rising tide of immorality in people’s individual lives. An example is that broken and degenerate Western educational systems are teaching people and children that promiscuity among even young teens is NORMAL! The British Telegraph exposed what is being taught to British youth. Read it and weep for a generation being deceived into perversity by the very people who should be PROTECTING them: “Schools are being told that children should be able to have consensual sex at the age of 13 as part of government-backed guidance…The guidelines—which can be used as part of sex education lessons—say that having sexual relationships when children reach their teens represents a ‘safe and healthy’ part of growing up…For 13- to 17-year-olds, normal behaviour includes taking an interest in pornography, having sexually explicit conversations, using the internet to chat online and consenting to oral or penetrative sex with the same or opposite gender.”

With such educational evil at work, and so many parents neglecting their role in teaching children basic right from wrong, is it any wonder that every form of sexual depravity is taking place?

Like a master chess player carefully moving pieces on a board, God is positioning the final prophetic pieces into place for His Master Plan. World conditions are being readied for the very last chapter of the end of man’s age. But newspapers, radio, television and the Internet do not report the truth about world events. They only explain what is happening—not WHY! This is because mankind does not know the solutions to civilization’s greatest problems.

Consider. Man’s governments, and their political remedies, have failed to do anything but make more and more problems—and the existing ones worse. Advancing technology has also failed to bring the utopia that all long for. Neither has modern religion brought answers. Like government, it has only brought war, division and more problems, while at the same time failing to explain the purpose of human existence.

With all that is happening regarding the advance of prophecy around the world, there simply cannot be many years left to finish this all-important Work of God before the “night comes when no man can work” (John 9:4). The Restored Church of God is preaching the good news of Christ’s true gospel to the world. The coming of the kingdom of God is mankind’s only solution—no political party or platform is going to effect change in any meaningful way for very long.

As society becomes more complex and confusing for the masses in every nation, The Real Truth magazine is bringing clear answers and the VITAL TRUTH of the Bible and prophecy—and is issuing a STRONG WARNING about what lies ahead! BIG things are about to happen, and you can KNOW them before they do!

The following statistics show the enormous size and scope of the Work behind The Real Truth magazine. At the end of November 2013, the year-to-date total for items distributed online was 8,990,953. The 2014 total at November’s close was 12,723,414—a 41.5% increase! And we are already seeing a powerful December to finish what has been an extraordinary year in statistics. Focusing just on YouTube, where we are quickly expanding the audience of The World to Come™ program, the increase is even more impressive at 162% year-over-year. (This breaks down to 9,887,016 minutes watched around the world just in the last 11 months!)

The next figures show how many have been reached since the Church’s three main websites were launched:

May these statistics truly open your eyes to the POWERFUL IMPACT God’s Work is having in all nations of Earth. God’s truths have been distributed to people in 247 countries and territories, and the Church has a growing membership in 60 countries. The Real Truth magazine is printed and mailed to subscribers in 89 countries, with more than a quarter million issues sent in 2014. The work of The Restored Church of God is truly a worldwide Work. And God is moving in POWERFUL WAYS to set the stage for a dramatic increase in the “volume” of His message across the world.

In light of these turbulent times in the United States and Britain, I would like to offer you the following free book—the full-length America and Britain in Prophecy. Many are wondering about the future of these two countries. In America, concerns abound about the state of the economy, a government shutdown, the healthcare system, immigration, political division and social and moral collapse. This country is in a state of crisis—and you need to know why, and what will ultimately result. In Britain, tensions with the European Union are rising almost weekly. God foretold this time, and America and Britain in Prophecy reveals all that lies ahead for America and other Western nations. There is simply no book like it on Earth. Request your FREE copy today!

Thank you for your continued interest in The Real Truth magazine.

Editor-in-Chief of The Real Truth Magazine 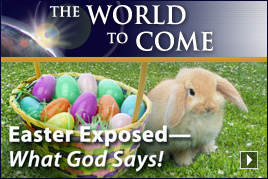 Latest from the Editor