This website requires the use of Javascript to function correctly. Performance and usage will suffer if it remains disabled.
How to Enable Javascript
Benjamin Netanyahu Set to Return to Power in Israel After PM Concedes 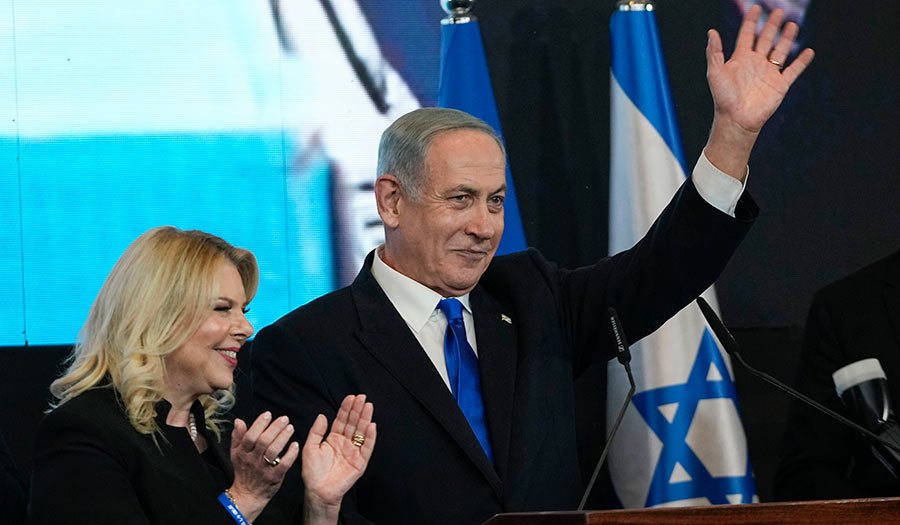 AP/Tsafrir Abayov
Benjamin Netanyahu, former Israeli Prime Minister and the head of Likud party, accompanied by his wife Sara waves to his supporters after first exit poll results for the Israeli Parliamentary election at his party’s headquarters in Jerusalem (Nov. 2, 2022).

The strong showing promised to end the political gridlock that has paralyzed Israel for the past three and a half years. But the planned agenda of the new government expected to take office—including an overhaul of the country’s legal system and a tough line against the Palestinians—could polarize a deeply divided nation and risks antagonizing Israel’s closest allies abroad.

Israel on Tuesday held its fifth election since 2019 in a race, like the previous four, that was widely seen as a referendum on Mr. Netanyahu’s fitness to rule as he faces corruption charges. While the previous races ended in deadlock, Mr. Netanyahu managed a disciplined campaign that gave him the edge over a divided and disorganized opposition.

The acting prime minister, Yair Lapid, conceded defeat and called Mr. Netanyahu to congratulate him shortly before the final results were released. Mr. Lapid said he had instructed his staff to prepare an organized transition of power.

According to the unofficial final results, Mr. Netanyahu and his nationalist and Orthodox allies captured 64 seats in Israel’s 120-seat Knesset. His opponents in the outgoing coalition, led by Mr. Lapid, won 51 seats, with the remainder held by a small unaffiliated Arab faction. Mr. Netanyahu still has to conduct negotiations with his partners, but is expected to form a coalition in the coming weeks.

The election focused heavily on the values that are meant to define the state: Jewish or democratic. In the end, voters favored their Jewish identity.

Mr. Netanyahu remains a deeply polarizing figure in Israel. If his coalition takes power and pushes forward with its war on the justice system, these divisions are likely to deepen.

Mr. Netanyahu, Israel’s longest-serving leader, was ousted in 2021 after 12 consecutive years in power by an ideologically diverse coalition. The coalition collapsed in the spring over infighting.

The strong showing by Likud and its allies reflected a decades-long shift to the right by the Israeli electorate.

Likud tapped into fears over Palestinian violence in the West Bank, accused Mr. Lapid of being weak and demonized his government for being the first to include an Arab party in a coalition.

Israel’s dovish left wing, meanwhile, had an abysmal showing in the election. The Labor party, which was a dominant force in Israeli politics for decades and supports Palestinian statehood, squeaked into parliament with the minimum four seats. The anti-occupation Meretz was banished into political exile for the first time since it was founded three decades ago.