This website requires the use of Javascript to function correctly. Performance and usage will suffer if it remains disabled.
How to Enable Javascript
Gunmen Attack Major Shia Holy Site in Iran, Killing 15 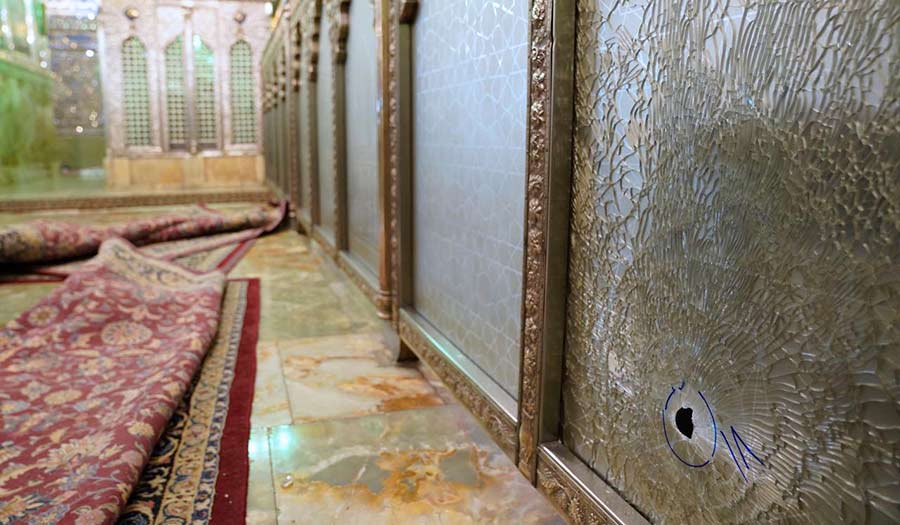 Iranian Students’ News Agency, ISNA via AP
A bullet hole is seen in a broken glass of the Shah Cheragh shrine in the southern city of Shiraz, Iran, where gunmen attacked the major Shia holy site, killing at least 15 people and wounding dozens (Oct. 26, 2022).

DUBAI, United Arab Emirates (AP) – Gunmen attacked a major Shia holy site in Iran on Wednesday, killing at least 15 people and wounding dozens. The attack came as protesters elsewhere in Iran marked a symbolic 40 days since a woman’s death in custody ignited the biggest anti-government movement in over a decade.

State TV blamed the attack on “takfiris,” a term that refers to Sunni Muslim extremists who have targeted the country’s Shia majority in the past. The attack appeared to be unrelated to the demonstrations.

The official website of the judiciary said two gunmen were arrested and a third is on the run after the attack on the Shah Cheragh mosque, the second holiest site in Iran. The state-run IRNA news agency reported the death toll and state TV said 40 people were wounded.

An Iranian news website considered to be close to the Supreme National Security Council reported that the attackers were foreign nationals, without elaborating.

The Islamic State group late Wednesday claimed responsibility for the attack on its Amaq news agency. It said an armed ISIS militant stormed the shrine and opened fire on its visitors. It claimed that some 20 people were killed and dozens more were wounded.

Such attacks are rare in Iran, but last April, an assailant stabbed two clerics to death at the Imam Reza shrine, the country’s most revered Shia site, in the northeast city of Mashhad.

Iranian President Ebrahim Raisi said that whoever led and planned the attack will “receive a regretful and decisive response,” without elaborating. IRNA quoted Mr. Raisi as saying, “This evil will definitely not go unanswered.”

Earlier on Wednesday, thousands of protesters had poured into the streets of a northwestern city to mark the watershed 40 days since the death in custody of 22-year-old Mahsa Amini, whose tragedy sparked the protests.

Deaths are commemorated in Shia Islam—as in many other traditions—again 40 days later, typically with an outpouring of grief. In Amini’s Kurdish hometown of Saqez, the birthplace of the nationwide unrest now roiling Iran, crowds snaked through the local cemetery and thronged her grave.

“Death to the dictator!” protesters cried, according to video footage that corresponds with known features of the city and Aichi Cemetery. Women ripped off their headscarves, or hijabs, and waved them above their heads. Other videos showed a massive procession making its way along a highway and through a dusty field toward Amini’s grave. There were reports of road closures in the area.

State-linked media reported 10,000 protesters in the procession to her grave.

In downtown Tehran, the capital, major sections of the traditional grand bazaar closed in solidarity with the protests. Crowds clapped and shouted “Freedom! Freedom! Freedom!” through the labyrinthine marketplace.

“This year is a year of blood!” they also chanted. “[Supreme Leader Ayatollah Ali Khamenei] will be toppled!”

The protests have also galvanized university students, labor unions, prisoners and ethnic minorities like the Kurds along Iran’s border with Iraq.

Since the protests erupted, security forces have fired live ammunition and tear gas to disperse demonstrations, killing over 200 people, according to rights groups.

Untold numbers have been arrested, with estimates in the thousands. Iranian judicial officials announced this week they would bring over 600 people to trial over their role in the protests, including 315 in Tehran, 201 in the neighboring Alborz province and 105 in the southwestern province of Khuzestan.

Tehran prosecutor Ali Salehi told the state-run IRNA news agency that four protesters were charged with “war against God,” which is punishable by death in Iran.

Iranian officials have blamed the protests on foreign interference, without offering evidence.

Last week, Iran imposed sanctions on over a dozen European officials, companies and institutions, including foreign-based Farsi channels that have extensively covered the protests, accusing them of “supporting terrorism.” The sanctions involve an entry and visa ban for the staffers in addition to the confiscation of their assets in Iran.