This website requires the use of Javascript to function correctly. Performance and usage will suffer if it remains disabled.
How to Enable Javascript
Beirut Bank Standoff Exposes Desperation of Economic Crisis 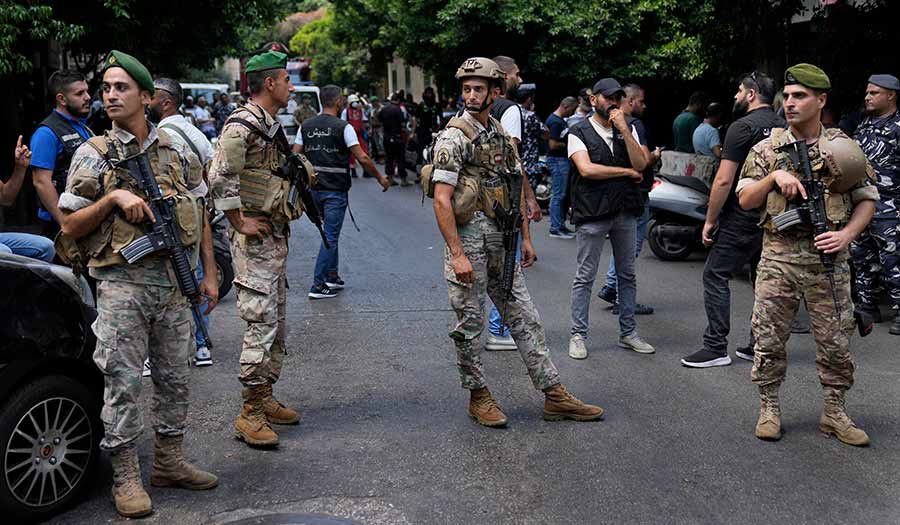 AP/Hussein Malla
Lebanese soldiers stand guard outside a bank where an armed man has taken hostages, in Beirut, Lebanon (Aug. 11, 2022).

Beirut (AP) – A judge ordered a gunman who took up to 10 hostages at a Beirut bank to force the release of his trapped savings to stay behind bars Friday, apparently a bid to prevent copycats as desperation deepens over Lebanon’s economic meltdown.

A few dozen relatives of Bassam al-Sheikh Hussein briefly closed a major road in Beirut, saying that keeping him in jail breaches an agreement reached Thursday. The 42-year-old food-delivery driver surrendered after a seven-hour standoff in return for getting $35,000 of his money and promises that he would only be questioned then set free. No one was injured.

It was the latest reminder of the pain created by Lebanon’s nearly three-year economic and financial crisis, described by the World Bank as one of the world’s worst since the 1850s. Three-quarters of the population are in poverty, corruption is endemic and many are losing hope for quick solutions.

Like most people in Lebanon, Mr. Hussein had no access to his money because of banks’ informal controls on flows of money. He had $210,000 at Federal Bank in Beirut and struggled to withdraw some to pay his father’s medical bills and other expenses.

Because taking hostages worked to free up some of Mr. Hussein’s savings, releasing him without charges could inspire others to follow suit as people face skyrocketing inflation and a lack of job opportunities. Many celebrated him as a hero, but it was not clear if his actions would lead to wider protests against banks.

“They want to send a message to people that this will not pass easily,” Paul Morcos, founder and owner of Justicia Consulting Law firm in Beirut, said about Mr. Hussein’s arrest.

The punishment for taking hostages and threatening people with weapons is usually three months to two years in prison but could reach a life sentence if it was for the purpose of getting money, Mr. Morcos said. But he expects Mr. Hussein to be released within days or weeks once people forget about what happened.

The international community has demanded reforms to ease Lebanon’s economic crisis, but entrenched political elites, blamed for decades of corruption and mismanagement, have resisted. Talks with the International Monetary Fund have moved slowly as parliament prepares legislation demanded by the IMF for a bailout, including laws on capital controls and those targeting money laundering.

Many of those in power are former warlords and militia commanders from the 1975-90 civil war. The ruling factions use public institutions to accumulate wealth and distribute aid to supporters. Corruption is often ignored, and institutions are undeveloped. As a result, power outages are frequent, trash is often uncollected and tap water is largely undrinkable.

Poverty is rising as prices skyrocket and the Lebanese pound loses more than 90 percent of its value since October 2019. Most people can only withdraw small amounts of money from banks each month at an exchange rate far worse than that of the unofficial market.

The situation started deteriorating dramatically last year after the state lifted fuel subsidies, leading to a surge in prices of almost all commodities. It came at a time when blackouts lasted for 22 hours a day, putting private generators out of reach for many as people now must pay for fuel in U.S. dollars.

Judicial officials said the judge decided to keep Hussein under arrest because he committed crimes such as taking hostages and threatening people with weapons. The officials, who spoke on condition of anonymity in line with regulations, said it was not clear how long Hussein will be kept in custody.

Mr. Hussein’s lawyer, Rafik Ghraizi, who attended the interrogation, told the local Al-Jadeed TV that his client did not point his weapon at anyone and had no intention of harming the employees. He said all that Mr. Hussein needed was his money back.

In January, a coffee shop owner withdrew $50,000 trapped in a bank in eastern Lebanon after taking employees hostage and threatening to kill them. He was released two weeks later.

When anti-government protests erupted in late 2019, protesters attacked banks, sometimes with Molotov cocktails, and lenders fortified their branches. At one point, police patrolled in front of every bank branch, but that changed after the protests waned.

Caretaker Deputy Prime Minister Saadeh Shami on Friday called on parliament to quickly approve a capital control law. Last year, he put the losses of the financial sector at $69 billion.

“Lebanon is at a crossroad: Reforms and improvement or more collapse. It’s up to us,” Mr. Shami, who is leading the talks with the IMF, said in a statement.