This website requires the use of Javascript to function correctly. Performance and usage will suffer if it remains disabled.
How to Enable Javascript
Vegas Water Intake Now Visible at Drought-stricken Lake Mead 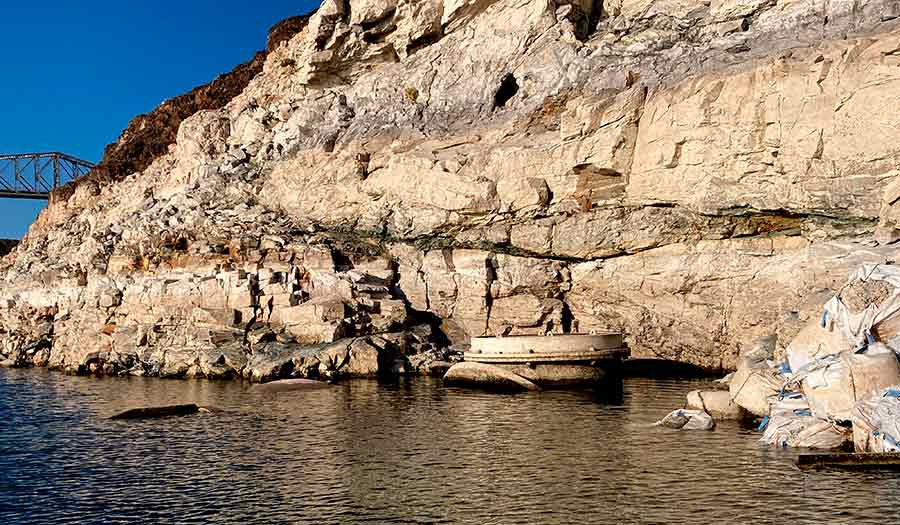 Southern Nevada Water Authority via AP
The top of Lake Mead drinking water Intake No. 1 sits above the surface of the Colorado River reservoir behind Hoover Dam. The intake is the uppermost of three in the drought-stricken lake that provides Las Vegas with 90 percent of its drinking water.

LAS VEGAS (AP) – A massive drought-starved reservoir on the Colorado River has become so depleted that Las Vegas now is pumping water from deeper within Lake Mead where other states downstream do not have access.

The Southern Nevada Water Authority announced this week that its Low Lake Level Pumping Station is operational, and released photos of the uppermost intake visible at 1,050 feet above sea level at the lake behind Hoover Dam.

“While this emphasizes the seriousness of the drought conditions, we have been preparing for this for more than a decade,” said Bronson Mack, water authority spokesman. The low-level intake allows Las Vegas “to maintain access to its primary water supply in Lake Mead, even if water levels continue to decline due to ongoing drought and climate change conditions,” he said.

The move to begin using what had been seen as an in-case-we-need-it hedge against taps running dry comes as water managers in several states that rely on the Colorado River take new steps to conserve water amid what has become perpetual drought.

“We don’t have enough water supplies right now to meet normal demand. The water is not there,” Metropolitan Water District of Southern California spokesperson Rebecca Kimitch said this week. The agency told some 6 million people in sprawling Los Angeles, Ventura and San Bernardino counties to cut their outdoor watering to one day a week, effective June 1, or face stiff fines.

The surface level of another massive Colorado River reservoir, Lake Powell, dipped below a critical threshold in March—raising concerns about whether Glen Canyon Dam can continue generating power for some 5 million customers across the U.S. West.

Lake Mead and Lake Powell upstream are the largest human-made reservoirs in the U.S., part of a system that provides water to more than 40 million people, tribes, agriculture and industry in Arizona, California, Colorado, Nevada, New Mexico, Utah, Wyoming and across the southern border in Mexico.

In Arizona, falling Colorado River levels have prompted an emphasis on conservation and raised fears of reduced water deliveries to desert areas that include metro Phoenix, Tucson, tribal lands and farms.

At Lake Mead, the new pumps are fed by an intake drilled nearer to the bottom of the lake and completed in 2020 to ensure the ability to continue to draw water for Las Vegas, its casinos, suburbs and 2.4 million residents and 40 million tourists per year.

The “third straw” draws drinking water at 895 feet above sea level—below a point at which water would not be released downstream from Hoover Dam.

Together, the pipeline and pump projects cost more than $1.3 billion. Drilling began in 2014, amid projections that the lake level would continue to fall due to drought.

Lake Mead, between Nevada and Arizona, reached its high-water mark in July 1983, at 1,225 feet above sea level. On Friday, the level was 1,055 feet—about 30 percent full. Some of the steepest cliffs bordering the lake show 170 feet of white mineral “bathtub ring.”

“Without the third intake, Southern Nevada would be shutting its doors,” said Pat Mulroy, former longtime chief of the Las Vegas-based water authority, who is now a consultant. “That’s pretty obvious, since the first straw is out of the water.”

A mid-level pipeline also can draw water from 1,000 feet.

The authority maintains that the Las Vegas water supply is not immediately threatened. It points to water conservation efforts that it says since 2002 have cut regional consumption of Colorado River water by 26 percent while the area population has increased 49 percent.