This website requires the use of Javascript to function correctly. Performance and usage will suffer if it remains disabled.
How to Enable Javascript
Protests Escalate in Kazakhstan; President’s Home Set Ablaze 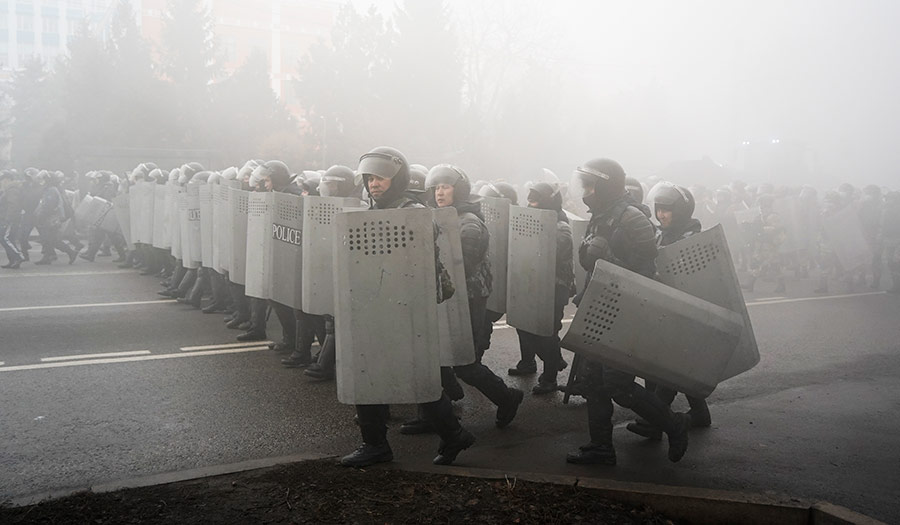 MOSCOW (AP) – Protesters in Kazakhstan’s largest city stormed the presidential residence and the mayor’s office Wednesday and set both on fire, according to news reports, as demonstrations sparked by a rise in fuel prices escalated sharply in the Central Asian nation.

Police reportedly fired on some protesters at the residence in Almaty before fleeing. They have clashed repeatedly with demonstrators in recent days, deploying water cannons in the freezing weather, and firing tear gas and concussion grenades.

The Kazakh Interior Ministry said eight police officers and national guard members were killed in the unrest and more than 300 were injured. No figures on civilian casualties were released.

President Kassym-Jomart Tokayev vowed to take harsh measures to quell the unrest and declared a two-week state of emergency for the whole country, expanding one that had been announced for both the capital of Nur-Sultan and the largest city of Almaty that imposed an overnight curfew and restricted movement into and around the urban areas.

The government resigned in response to the unrest. Kazakh news sites became inaccessible late in the day, and the global watchdog organization Netblocks said the country was experiencing a pervasive internet blackout, but the Russian news agency Tass reported that internet access was restored in Almaty by early Thursday.

Although the protests began over a near-doubling of prices for a type of liquefied petroleum gas that is widely used as vehicle fuel, their size and rapid spread suggested they reflect wider discontent in the country that has been under the rule of the same party since gaining independence from the Soviet Union in 1991.

Mr. Tokayev said on state television shortly before midnight that he has called on other countries in the Collective Security Treaty Organization, an alliance of ex-Soviet states including Russia, for assistance in restoring order, but it was not clear what measures he had asked for.

He claimed the unrest was led by “terrorist bands” that had received help from unspecified other countries. He also said rioters had seized five airliners in an assault on Almaty’s airport; but the deputy mayor later said the airport had been cleared of marauders and was working normally.

Kazakhstan, the ninth-largest country in the world, borders Russia to the north and China to the east and has extensive oil reserves that make it strategically and economically important. Despite those reserves and mineral wealth, discontent over poor living conditions is strong in some parts of the country. Many Kazakhs also chafe at the dominance of the ruling party, which holds more than 80 percent of the seats in parliament.

Hours after thousands of demonstrators gathered outside the presidential residence in Almaty, Tass reported that it was on fire and that protesters, some wielding firearms, were trying to break in. Police fled from the residence after shooting at demonstrators, according to the report, which was filed from Kazakhstan.

Many of the demonstrators who converged on the mayoral office carried clubs and shields, according to earlier reports in Kazakh media. Tass later said the building was engulfed in flames.

The protests began Sunday in Zhanaozen, a city in the west where government resentment was strong in the wake of a 2011 strike by oil workers in which police fatally shot at least 15 people. They spread across the country in the following days, and on Tuesday large demonstrations broke out in Nur-Sultan and in Almaty, the former capital.

Today’s Problems: What Everyone Misses
The world is now at the point you would expect it to be before the imminent arrival of the Kingdom of God. Problems have grown worse, as if they were on a clock ticking toward Christ’s Return. Every corner of the globe is experiencing turmoil, with no solution in sight. There are individual problems that are too much for man’s governments to solve—let alone solve so many, and at the same time!