This website requires the use of Javascript to function correctly. Performance and usage will suffer if it remains disabled.
How to Enable Javascript
What Kilauea’s History Tells Us About Its Future

What Kilauea’s History Tells Us About Its Future 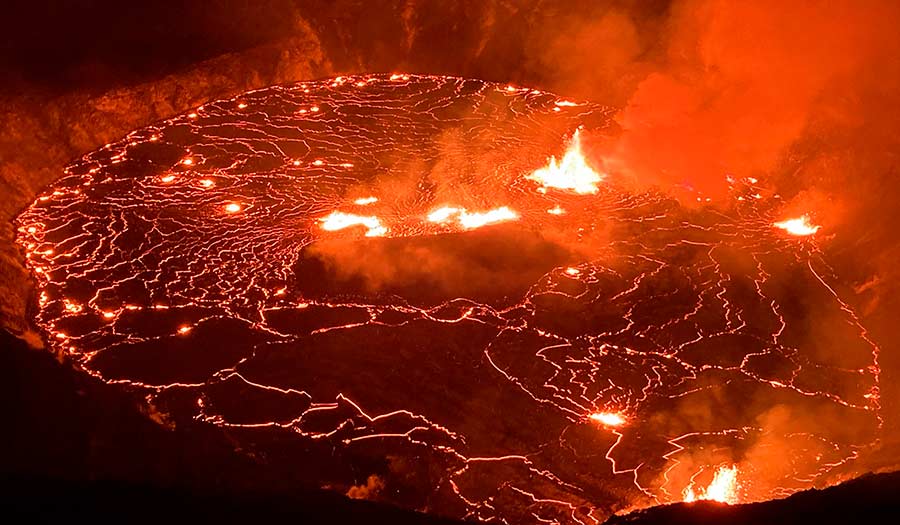 USGS via AP
The eruption within Kilauea volcano’s Halemaumau crater at the volcano’s summit (Sept. 29, 2021).

HONOLULU (AP) – Kilauea, one of the most active volcanos on Earth, began erupting on Hawaii’s Big Island Wednesday. The eruption is not in an area with homes and is entirely contained within Hawaii Volcanoes National Park.

Officials said increased earthquake activity and ground swelling before the eruption put them on high alert. Fissures then opened in the summit area and sent lava fountaining into the sky. Now the area has filled with molten rock, creating a lake of lava in the volcano’s crater.

The new lava is an expected evolution of a volcano that is recharging after a huge eruption in 2018 drained much of its magma.

The 2018 eruption destroyed hundreds of homes and displaced thousands of residents. But experts say this latest eruption is not expected to flow into residential areas.

Here is an overview of the latest eruption at Kilauea.

Did Scientists Know It Was Coming?

Scientists at the Hawaiian Volcano Observatory noticed a surge of earthquakes about 5 miles east of the summit’s caldera early Wednesday. By the afternoon another series of earthquakes accompanied by ground swelling prompted them to increase the alert level.

“We picked up a series of earthquakes down the east rift zone, so on the order of about 5 miles from the summit. And these kind of came in what we would call a small swarm. So one after another,” said Ken Hon, the USGS scientist in charge of Hawaii Volcano Observatory. “They were enough of an alert that we became suspicious that pressure was building within the system.”

The agency raised its alert level “to orange or watch, anticipating that there might be an eruption,” Mr. Hon said. “And 20 minutes later, in fact, there was an eruption.”

It is not uncommon for Kilauea to have earthquakes, which often indicate magma is moving underground or parts of the volcanos are shifting. Earthquakes and ground swelling at the same time can be a precursor to an eruption.

Eruptions on Kilauea are not uncommon. In fact, the volcano erupted nearly continuously for decades, but mostly not in densely populated residential areas before the 2018 eruption. That event destroyed more than 700 homes and displaced thousands of residents.

Kilauea had been active since 1983 and streams of lava occasionally covered rural farms and homes. During that time, the lava sometimes reached the ocean, causing dramatic interactions with the water.

The same area of the volcano that began erupting Wednesday also erupted in December and lasted until May.

Hawaiian chants and stories tell the stories of countless eruptions. Kilauea has erupted 34 times since 1952.

Mr. Hon said that within hours of Wednesday’s eruption the volcano’s summit crater floor had been covered in more than 6 feet of lava.

Over four months in 2018, Kilauea spewed enough lava to fill 320,000 Olympic-sized swimming pools, burying an area more than half the size of Manhattan in up to 80 feet of now-hardened lava. The molten rock reduced landmarks, streets and neighborhoods to a vast field of blackened boulders and volcanic shard.

The eruption in December created a lava lake with enough molten rock to fill 10 Hoover dams.

After the 2018 eruption, a summit lava lake in the same area stopped erupting and for the first time in recorded history began to fill with water, creating a fresh water lake tinged with volcanic material.

What Are the Dangers?

Hawaii Volcanoes National Park remained open to the public and officials expected tens of thousands of visitors to come see the new eruption.

National park spokesperson Jessica Ferracane said that while the lava itself is far from where people can hike or drive, other hazards still exist.

Gases that emanate from the volcano can be dangerous if inhaled, and while the plume is billowing away from people, the wind could change and send it over areas where the public gathers.

She also noted that there are huge cracks in the ground that people can fall into and that visitors should avoid approaching the edge of the caldera. There is a nearly 500-foot drop from the crater rim to the floor.

Where Did the Eruption Happen?

It occurred at the summit of Kilauea volcano, an uninhabited area within Hawaii Volcanoes National Park on the Big Island. This is about 200 miles southeast of Honolulu, which is on a different island called Oahu.

“All signs indicate that it will stay within the crater,” said Mr. Hon, the USGS scientist. “We’re not seeing any indications that lava is moving into the lower part of the east rift zone where people live. Currently all the activity is within the park.”

The site is miles from the nearest town. The park has closed off this part of the summit to the public since 2008.

The 2018 eruption was in the lower east rift zone. Fissures opened across Leilani Estates and other populated areas of the island’s Puna district. Lava from that eruption snaked to the Pacific Ocean, destroying homes and farms along the way. Lava evaporated a fresh water lake and created a new black sand beach.

What Will Happen Next?

Because much of the magma that had fueled Kilauea for years erupted in 2018, the volcano is now recharging and will erupt again in the future.

Mr. Hon said these types of small eruptions could be happening for years as the volcano fills up.

“The magma keeps coming in to Kilauea at a pretty constant rate and so it’s either filling the inside of the volcano…or it’s coming out to the surface,” he said.