This website requires the use of Javascript to function correctly. Performance and usage will suffer if it remains disabled.
How to Enable Javascript
Mexico’s Referendum on Trying Ex-presidents Falls Short 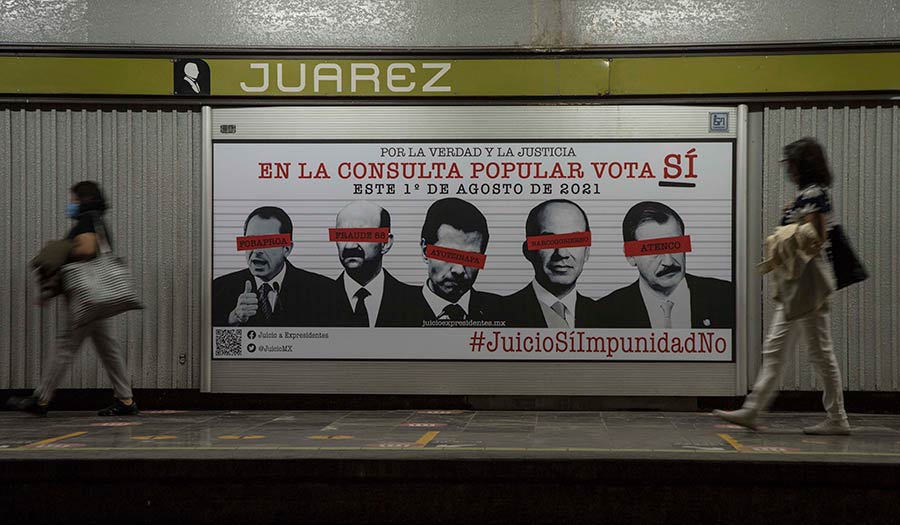 AP/Christian Palma
Commuters walk past an advertisement showing images of several Mexican former presidents, calling for citizens to participate in a referendum on whether they should be tried for their alleged crimes during their time in office, in Mexico City (July 31, 2021).

MEXICO CITY (AP) – A referendum in Mexico on Sunday cost the country about $25 million, but drew only a fraction of the voters needed to make it binding.

Few people liked the poorly written question on the ballot, and the vote was held in a third wave of the coronavirus pandemic.

The nationwide referendum asked whether ex-officials should be tried for any illegal acts. The National Electoral Institute reported that while over 90 percent of those who participated voted “yes,” only about 7 percent of eligible voters turned out, well below the 40 percent threshold needed.

Critics noted that Mexico has no formal amnesty for former leaders, and there is nothing in current law saying they cannot be brought to justice. As opponents say in a slogan, “The law must be applied, not put up for a vote.”

Jose Francisco Espinosa Cortes, 60, who drives a taxi and runs a computer repair business, was one of only about 60 people to have voted by midmorning at a polling station in the middle-class San Rafael neighborhood.

“A lot of people have fallen for the propaganda of ‘why go out and vote, nothing is going to change,” said Espinosa Cortes. “But if we don’t end impunity, we’ll never end corruption,” he said calling the referendum “a historic chance for Mexico to get justice.”

“There should be a line of people out to here,” he said, gesturing to the empty sidewalk in front of the polling place.

Photographer Santiago Ruisenor, 43, preferred to take his daughter to a Mexico City park to play Sunday rather then vote. “This is a farce,” Mr. Ruisenor said. “This is pure cynicism, an act that is only being used to increase the president’s popularity.”

Mr. Lopez Obrador is seeking the blessing of the public to change course and go after ex-presidents, two of whom—Felipe Calderon (2006-2012) and Vicente Fox (2000 to 2006)—have been among his harshest critics.

In all, Mexico has six living ex-presidents, the oldest of whom is 99. The statute of limitations has expired on many of the abuses they are accused of committing, most involving massive corruption, kickbacks, wasting government money and criminal economic mismanagement.

Mired in Crises, Lebanon Marks 1 Year Since Horrific Blast
BEIRUT (AP) – United in grief and anger, families of the victims and other Lebanese came out into the streets of Beirut on Wednesday to demand accountability as banks, businesses and government offices shuttered to mark one year since the horrific explosion at the port of Beirut.