This website requires the use of Javascript to function correctly. Performance and usage will suffer if it remains disabled.
How to Enable Javascript
Marking 100 Years of Communist Party, President Xi Hails ‘Great Rejuvenation’ 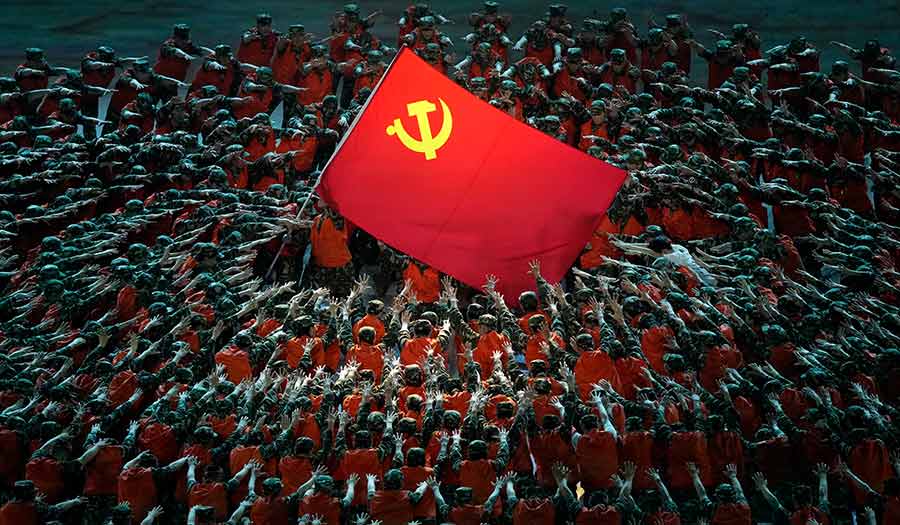 AP/Ng Han Guan
Performers dressed as rescue workers gather around the Communist Party flag during a gala show ahead of the 100th anniversary of the founding of the political party, in Beijing (June 28, 2021).

BEIJING (AP) – Amid celebrations over the centenary of the ruling Communist Party, Chinese President Xi Jinping has awarded loyal party members with medals and called for adherence to Marxism.

While unleashing private industry, the ruling party has maintained an iron grip on political power, along with preferential policies toward state-run companies.

“All party comrades should take their faith in Marxism and the socialism with Chinese characteristics as their life’s purposes,” Mr. Xi said in his address to medal winners. Celebrations conclude with a commemoration Thursday at Beijing’s Tiananmen Square.

Over his nine years as party head, Mr. Xi has established himself as China’s most powerful ruler since Mao Zedong, who founded the People’s Republic in 1949 after defeating Chiang Kai-shek’s Nationalists amid civil war.

Like Mao, Mr. Xi is not bound by term limits and, at 68, will likely remain in office for years to come. While repressing any sign of political opposition at home and promoting an anti-corruption campaign, he has advanced an increasingly assertive foreign policy that seeks command over the South China Sea, intimidate Taiwan into accepting Beijing’s control, and join with Russia in challenging U.S. influence in international affairs.

China’s Communist Party now boasts almost 92 million members, just over 6 percent of the country’s population of 1.4 billion. The vast majority of government officials and leaders of state industry are party members, providing what the leadership hails as a source of social cohesion in contrast to partisan divides in the U.S. and elsewhere.

Alongside the anniversary celebrations, the party has been giving heavy coverage in the entirely state-controlled media to racial inequality and other social problems in the West. That appears to reflect confidence in its ability to deflect heavy criticism over China’s detention of more than 1 million Uyghurs and a crackdown on freedom of speech and political opponents in Hong Kong.

In his speech, Mr. Xi said party members should lead the drive for China’s “great rejuvenation,” a reference to his agenda for China to retake its centuries-old role as a regional and international power in culture, economics and military power.

“On the new march to a fully established modern socialist nation, keep moving toward the goals of the second century,” Mr. Xi said.