This website requires the use of Javascript to function correctly. Performance and usage will suffer if it remains disabled.
How to Enable Javascript
‘Xi Jinping Is My Spiritual Leader’: China’s Education Drive in Tibet 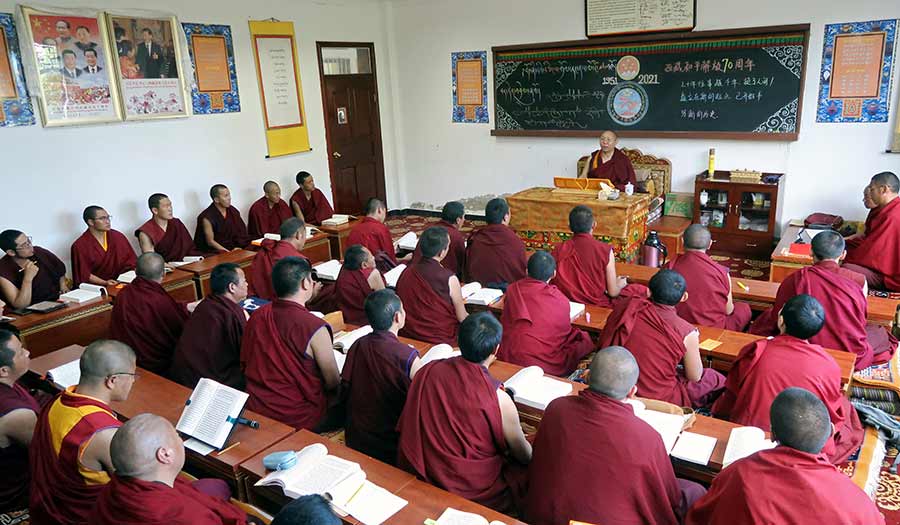 In a rare and tightly chaperoned government tour of the region last week, a Reuters journalist saw the portraits in classrooms, streets, religious institutions, houses and the bedroom of a Buddhist monk.

More than a dozen other reporters were also on the trip.

China is broadening a political education campaign as it celebrates the 70th anniversary of its control over Tibet.

Chinese officials say the campaign is key to the future of Tibet, a region which makes up over 12 percent of China’s land mass but is home to just 3.5 million people, mostly ethnic Tibetans.

Civilians and religious figures who the government arranged to be interviewed on the five-day trip pledged loyalty to the Communist Party and Mr. Xi.

Asked who his spiritual leader was, a monk at Lhasa’s historic Jokhang temple named Mr. Xi.

“I’m not drunk…I speak freely to you,” said the monk named Lhakpa, speaking from a courtyard overlooked by security cameras and government observers.

The portraits of Mr. Xi were visible at almost all sites visited by Reuters during the trip to Tibet, where journalists are banned from entering outside of such tours. It was not clear when the posters and flags were put up.

“The posters coincide with a massive political education program which is called ‘feeling gratitude to the party’ education,” said Robert Barnett, a Tibetan studies veteran scholar at the University of London’s School of Oriental and African Studies.

China’s foreign ministry said: “Tibet’s economy and society has made great achievements under the care of China’s central government and the strong support of every Chinese person.

“The right to religious freedom of all ethnic groups in Tibet are protected by the Constitution and the law.”

During the visit, government officials suggested that such images, along with small Chinese flags that lined many city streets, were a sign of the “patriotic feeling” in Tibet.

Beijing says it “peacefully liberated” Tibet in 1951, after Chinese troops entered the then-country and took over its administration.

The Dalai Lama, the spiritual leader of Tibetan Buddhism, fled Tibet in 1959 after a failed uprising against Chinese rule, and has since established a government in exile based in Dharamsala, India.

Beijing has labeled him a dangerous separatist and has said when he passes away the government will select its own successor.

Reuters did not see any images of the Dalai Lama, previously common in homes throughout Tibet, on the trip from May 31 to June 5.

Photos of the spiritual leader are now strictly banned, according to rights groups and Tibetans who have since left the region.

The foreign ministry repeated China’s position that the Dalai Lama was “attempting to separate Tibet from China.”

“Since Dalai defected, he has not done anything good for the Tibetan people,” said Fan Chunwen, the secretary for Tibet’s Department of Education.

In Tibet’s College of Buddhism, a major religious training school on the outskirts of Lhasa, Chinese flags flew atop temples and images of Mr. Xi featured prominently in every dorm and classroom visited by Reuters.

“We are under the leadership of the Communist Party now, of course, we must learn about politics,” said Kelsang Wandui, vice director of the college.

Around 40 percent of the school’s study program was dedicated to political and cultural education, Mr. Wandui said, adding the monks will celebrate the upcoming 100th anniversary of the Communist Party on July 1.

The Central Tibetan Administration, the name of the exiled Tibetan government which oversees up to 150,000 Tibetans in exile, said the “political re-education campaign has been reinvigorated to Sinicize Tibet.”

Beijing has consistently strongly denied any accusations of rights abuses in Tibet, and says people in China are free to practice approved religions, including Buddhism.

In a Lhasa high school political ideology class visited by Reuters, a teacher preached the benefits of China’s policy in Tibet and led them in chants of agreement.