This website requires the use of Javascript to function correctly. Performance and usage will suffer if it remains disabled.
How to Enable Javascript
Lebanese Leaders Exchange Barbs as Country Sinks into Crisis 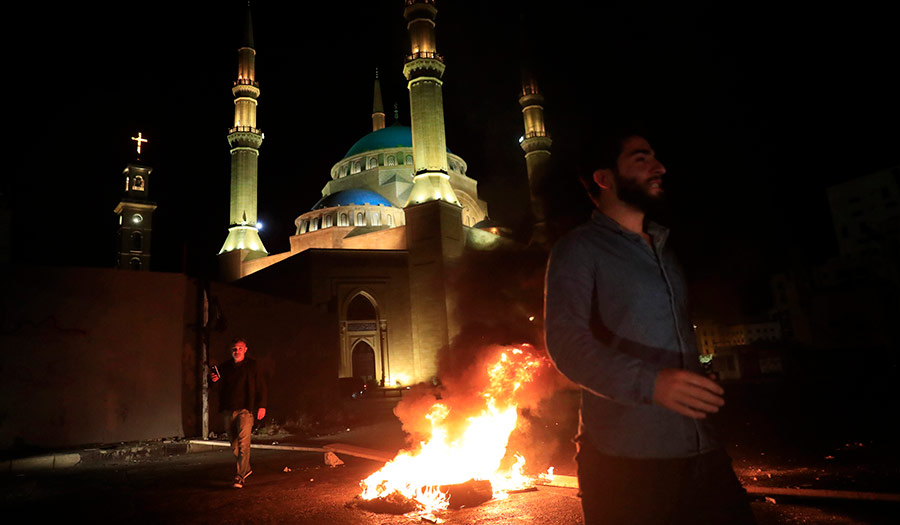 AP/Hussein Malla
Protesters block a main road by turning tires after a top court suspended a Central Bank decree that allowed the Lebanese to withdraw from dollar deposits at a rate two and a half times better than the fixed exchange rate, in downtown Beirut (June 3, 2021).

BEIRUT (AP) – Lebanon’s president and prime minister-designate traded barbs Wednesday, accusing one another of obstruction, negligence and insolence in a war or words that has for months obstructed the formation of a new government as the country sinks deeper into economic and financial crisis.

The power struggle between the premier-designate, Saad Hariri, on one side and President Michel Aoun and his son-in-law Gebran Bassil on the other, has worsened despite warnings from world leaders and economic experts of the dire economic conditions tiny Lebanon is facing. The World Bank on Tuesday said Lebanon’s crisis is one of the worst the world has seen in the past 150 years.

In a reflection of the growing turmoil, scores of Lebanese lined up in front of ATM machines late on Wednesday, after a top court suspended a Central Bank decree that allowed them to withdraw from dollar deposits at a rate two and a half times better than the fixed exchange rate.

In a late night burst of anger, protesters blocked main roads in Beirut and north of the capital. A young activist told a local TV station the protest was against the constant humiliation of Lebanese who line up to fill their cars with fuel, increasing power cuts, search for medicine and deal with confused banking decisions that are robbing thousands of their savings.

Lebanon is governed by a sectarian power sharing agreement but as the crisis deepens, members of the ruling elite bicker over how to form a government that will have to make tough decisions.

Mr. Hariri, who was tasked by Mr. Aoun to form a Cabinet seven months ago, blames the president for the months-long delay, accusing him of insisting on having veto power in the upcoming government.

Mr. Aoun, an ally of the powerful militant Hezbollah group, has said that Mr. Hariri did not shoulder his responsibilities in forming a government they both can agree on. There is no legal avenue for the president to fire the prime minister-designate, who is chosen to the post by a majority of lawmakers.

The rift has paralyzed the cash-strapped country, delaying urgently needed reforms. The economic crisis, which erupted in 2019, has been compounded by the impact of the coronavirus pandemic on Lebanon and a massive blast at Beirut’s port last year that killed over 200 people and defaced a big section of the capital.

The crisis has driven more than half of the population into poverty, caused the local currency to lose more than 85 percent of its value, and prompted banks to lock deposits through informal capital controls, eroding trust in a once-thriving banking sector.