This website requires the use of Javascript to function correctly. Performance and usage will suffer if it remains disabled.
How to Enable Javascript
U.S. Schools Fight to Keep Students amid Fear of Dropout Surge 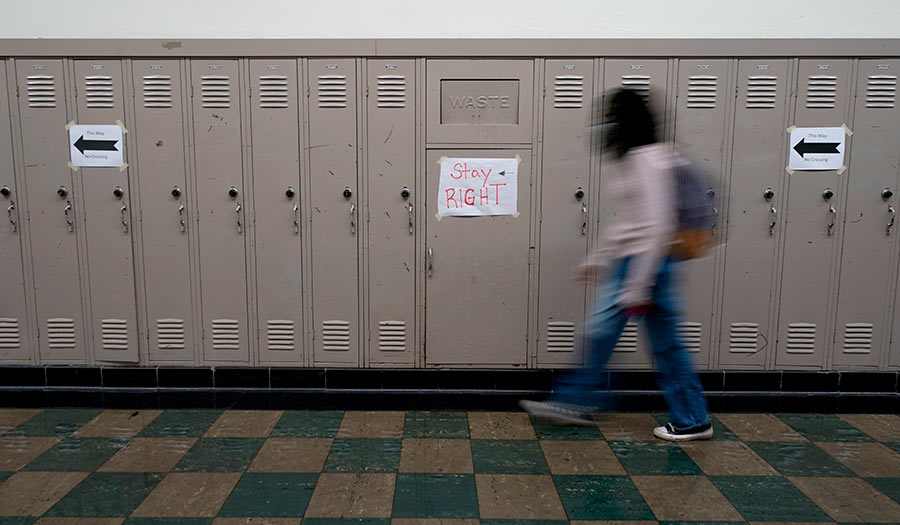 AP/Charlie Riedel
A student walks between classes at Wyandotte High School in Kansas City, Kansas, on the first day of in-person learning (March 30, 2021).

KANSAS CITY, Kansas (AP) – U.S. educators are doing everything they can to track down high school students who stopped showing up to classes and to help them get the credits needed to graduate, amid an anticipated surge in the country’s dropout rate during the coronavirus pandemic.

Data is not yet available on how the pandemic has affected the nation’s overall dropout rate—2019 is the last year for which it is available—and many school officials say it is too early to know how many students who stopped logging on for distance learning do not plan to return. But soaring numbers of students who are failing classes or are chronically absent have experts fearing the worst, and schools have been busy tracking down wayward seniors through social media, knocking on their doors, assigning staff to help them make up for lost time and, in some cases, even relaxing graduation requirements.

“When students drop out, they typically look for an out, an opportunity to leave. And this has provided that, unfortunately,” Sandy Addis, chairman of the National Dropout Prevention Center, said recently, referring to the pandemic. His group believes the dropout rate has spiked this year and will remain high for years.

At one high school in Kansas City, Kansas, staff members have made thousands of calls to the families of at-risk students, said Troy Pitsch, who supervises high school principals in the city.

“If we lose a student, it is going to be after kicking and screaming and fighting tooth and nail for them,” Mr. Pitsch said.

Many districts were forgiving last spring when schools shut down abruptly, freezing grades unless students wanted to improve them. That made this year the first for which schools would feel the full effects of the pandemic on student performance and engagement.

The early signs are not encouraging. The United Nations Educational, Scientific and Cultural Organization warned that the pandemic had put 24 million children worldwide at risk of dropping out of school. And the pandemic’s effects could erase gains the U.S. made in reducing its dropout rate, which fell from 9.3 percent in 2007 to 5.1 percent in 2019, according to the National Center for Education Statistics. Not finishing high school significantly hurts a person’s earning potential, with dropouts bringing home an average of $150 less per week than graduates, according to U.S. Bureau of Labor Statistics data.

To keep students on track, some local governments and school systems have waived certain testing requirements for graduation or changed grading policies so that missed assignments are not as damaging. But such leniency carries the risk of watering down academic standards, said Russell Rumberger, a professor emeritus of education at the University of California, Santa Barbara, who has written about dropouts.

“If they let you pass with a D and you don’t have to do very much to do it, maybe technically you are getting a diploma, but you are not getting the same type of diploma you may have gotten prior to the pandemic, when the standards were higher,” he said.

A National Dropout Prevention Center report predicted a doubling or tripling of the number of students who were at risk of falling behind academically and not graduating.

Among them for much of this school year was Jose Solano-Hernandez, a 17-year-old senior at Wyandotte High School in Kansas City, Kansas. In January, when he was at his lowest point following the deaths of one grandparent from COVID-19 and another from cancer in the same week, he estimated that he had missed eight assignments in each of his classes.

“I wouldn’t make my parents proud,” he recalled thinking as he struggled to learn virtually at night while working by day at a mechanic’s shop.

Mr. Solano-Hernandez has been slowly chipping away at his backlog of work since his school brought back him and other struggling seniors for extra in-person help more than a month before the rest of the student body returned at the end of March. He said the change brought “relief” and he is now hopeful he will graduate.

Mary Stewart, the school’s principal, said there was “radio silence” from hundreds of students in the fall. But the number who were not accounted for shrank to about 40 by the spring after staff hunted down siblings and scrolled through Facebook searching for clues to their whereabouts.

“I went to a house of a young man the day before Thanksgiving and found that he had self-isolated in his room because of a mental health issue,” she said. “That is very common. Whatever happens in the community and in the world, we are a micro-system of that.”

The pandemic also has taken a toll on students at North Grand High School in Chicago.

Principal Emily Feltes said some of her students took on jobs to support their families and others fell ill. Her students returned for part-time in-person instruction in April, but she is worried that dropout numbers will rise.

“We have done everything that we think that we can to try to re-engage kids—to try to help them. And I know that my colleagues are all working really hard too,” she said. “But the reality is that this has been a worldwide and a national trauma.”

Persuading reluctant students to return is not easy. At Orange County Public Schools in the Orlando, Florida, area, substitute teacher Patrice Pullen was assigned in December to oversee a group of 13 seniors who fell behind during virtual learning. She said it became clear on her first day that her most important job would be “rebranding” the students, who had come to see themselves as failures.

“You have kids—and I’m not exaggerating—they had zeros. They had not turned in anything since August, since school started,” she said. Now, eleven are on track to graduate and the other two are close to being on track.

At Fairfax County Public Schools in Virginia, the 185,000-student district saw the percentage of middle school and high school students earning Fs in at least two classes jump by 83 percent in the fall.

The spring numbers returned to more normal levels as the district made several changes, including dropping the minimum number of assignments per quarter from nine to six and allowing teachers to accept late work on major assignments with minimal penalties, said district spokeswoman Lucy Caldwell. Still, she said, it is hard to say how many students disappeared or what will happen with dropouts.

“The pandemic was extraordinarily difficult on families—emotionally, economically, and physically,” Ms. Caldwell said.