This website requires the use of Javascript to function correctly. Performance and usage will suffer if it remains disabled.
How to Enable Javascript
Afghan War Map Shows Taliban Stronger After 20 Years 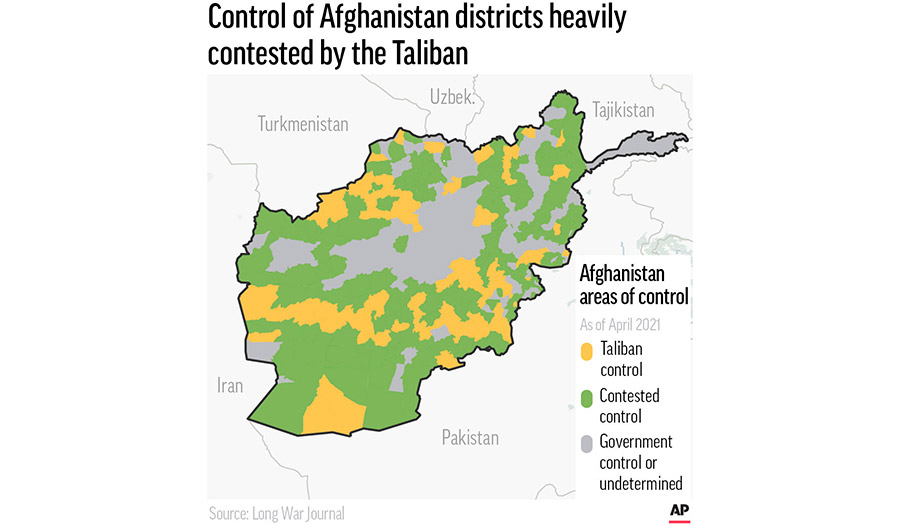 DUBAI, United Arab Emirates (AP) – America’s longest war, the two-decade-long conflict in Afghanistan that started in the wake of the September 11 terrorist attacks, killed tens of thousands of people, dogged four U.S. presidents and ultimately proved unwinnable despite its staggering cost in blood and treasure.

Since the U.S.-led invasion of 2001 and subsequent overthrow of Afghanistan’s Taliban government, insurgent activity shrank, then began to grow again as the conflict stretched on for two decades. Now, as the withdrawal with a summer completion date looms, even American officials acknowledge being publicly in the dark about the Taliban’s strength.

“By many measures, the Taliban are in a stronger military position now than at any point since 2001, though many once-public metrics related to the conduct of the war have been classified or are no longer produced,” a March report by the U.S. Congressional Research Service warned.

That included data offered on the roughly 400 local districts across Afghanistan’s 34 provinces. Control of those districts had been a key metric to judge overall control in the country.

In its last published report to include that level of detail, the U.S. Special Inspector General for Afghanistan Reconstruction said the Afghan government controlled just 54 percent of those districts as of October 2018, the lowest number recorded since public tracking began in November 2015. Of the remaining districts, the U.S. government described 34 percent as contested and 12 percent as being under insurgent control.

In April 2019, the inspector general said the U.S.-commanded NATO Resolute Support mission no longer assessed district-level control, describing them as offering “limited decision-making value to the commander.” But that decision came amid the Trump administration’s push for negotiations with the Taliban in Qatar, suggesting military officials shut down the effort to avoid showing how bad things had become, said Bill Roggio, who has been tracking the war for years.

Mr. Roggio, whose Long War Journal now operates in the Washington-based think tank called the Foundation for the Defense of Democracies, has tracked the conflict for years based on press reports and data he has gathered. He believes half of the country’s districts are now contested between the government and the Taliban, with over 120 fully government controlled and more than 70 fully held by the Taliban.

But even he acknowledges those numbers represent his best guess. Some districts held by the government swing back and forth depending on Taliban offensives. Others see the government hole up in central headquarters or barracks—and then “the police commander is getting killed in an IED attack when he pulls out of the base,” Mr. Roggio said, using an acronym for a homemade bomb.

“A lot of cases in these districts that I have contested, the government really only controls the district centers,” Mr. Roggio said. “I think that that map actually should look worse than it really is.”

Fawad Aman, a deputy spokesman for the Afghan Defense Ministry, disputed Mr. Roggio’s figures as “not correct and far from reality.” However, he claimed without offering evidence that the Taliban controlled just “more than 10 districts” in Afghanistan in “very remote parts of the country.”

Mr. Aman’s claim is roughly half the lowest estimate of Taliban district control ever offered publicly by the U.S., which came in January 2016.

A recent report from the United Nations Office for the Coordination of Humanitarian Affairs reported fighting across the country, with some 90,000 people internally displaced since the start of this year alone. Since 2012, some 4.8 million people have been displaced from their homes and not returned in a country of 38 million.

Even Kabul, the country’s heavily guarded capital, is not safe. The UN Assistance Mission in Afghanistan showed the most civilian casualties in 2020 from any province came in Kabul, with 255 people killed and 562 wounded.

The worst violence came from targeted killings—which included activists, journalists, judges and lawyers since Washington struck its deal with the Taliban. While the Islamic State group’s Afghanistan affiliate has claimed some of the slayings, most are not acknowledged by any group—only adding to the growing sense of unease there.

The U.S. withdrawal, beginning in May, is slated to see all combat troops depart the country after America’s longest war. That likely will include the personnel responsible for calling in and guiding airstrikes. Without the strikes, Mr. Roggio said the Afghan military likely will face a major offensive it now is too stretched to defend nationwide.

And the map will change again.

Report: U.S. Wasted Billions on Cars, Buildings in Afghanistan
ISLAMABAD (AP) – The United States wasted billions of dollars in war-torn Afghanistan on buildings and vehicles that were either abandoned or destroyed, according to a report released Monday by a U.S. government watchdog.