This website requires the use of Javascript to function correctly. Performance and usage will suffer if it remains disabled.
How to Enable Javascript
'Time to End the Forever War': U.S., Allied Troops to Leave Afghanistan by September 11 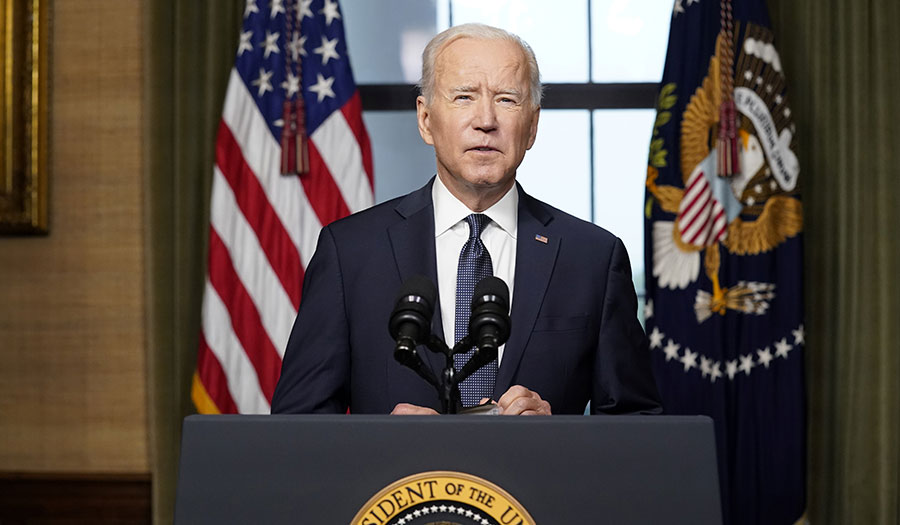 U.S. President Joe Biden delivers remarks on his plan to withdraw American troops from Afghanistan, at the White House (April 14, 2021).

Reuters – President Joe Biden said on Wednesday U.S. troops will be withdrawn from Afghanistan starting May 1 to end America’s longest war, rejecting calls for them to stay to ensure a peaceful resolution to that nation’s grinding internal conflict.

Foreign troops under NATO command will also withdraw from Afghanistan in coordination with the U.S. pull-out, NATO allies agreed. The withdrawal of foreign troops will be completed by September 11.

Around 7,000 non-U.S. forces from mainly NATO countries, also from Australia, New Zealand and Georgia, outnumber the 2,500 U.S. troops in Afghanistan, but they still rely on American air support, planning and leadership.

“While our military contribution will reduce, we will continue to support the stability of Afghanistan through our bilateral partnership and in concert with our other nations,” Australian Prime Minister Scott Morrison said.

Mr. Biden acknowledged that U.S. objectives in Afghanistan had become “increasingly unclear” over the past decade and set a deadline for withdrawing all U.S. troops remaining in Afghanistan by September 11, exactly 20 years after al-Qaeda’s attacks on the United States that triggered the war.

But by pulling out without a clear victory over the Taliban and other radicals in Afghanistan, the United States opens itself to criticism that a withdrawal represents a de facto admission of failure for American military strategy.

“It was never meant to be a multi-generational undertaking. We were attacked. We went to war with clear goals. We achieved those objectives,” Mr. Biden said, noting that al-Qaeda leader Osama bin Laden was killed by American forces in 2011 and saying that organization has been “degraded” in Afghanistan.

The war has cost the lives of 2,448 American service members and consumed an estimated $2 trillion. U.S. troop numbers in Afghanistan peaked at more than 100,000 in 2011.

In withdrawing, Mr. Biden is embracing risks at the start of his presidency that proved too great for his predecessors, including that al-Qaeda might reconstitute itself or that the Taliban insurgency might topple the U.S.-backed government in Kabul.

“I am now the fourth American president to preside over an American troop presence in Afghanistan. Two Republicans. Two Democrats,” Mr. Biden said. “I will not pass this responsibility on to a fifth.”

Afghan President Ashraf Ghani wrote on Twitter that he spoke with Mr. Biden and respects the U.S. decision. Mr. Ghani added that “we will work with our U.S. partners to ensure a smooth transition” and “we will continue to work with our US/NATO partners in the ongoing peace efforts.”

A peace summit on Afghanistan is planned from April 24 in Istanbul that would include the United Nations and more than 20 countries.

The Taliban, ousted from power in 2001 by U.S.-led forces, said they would not take part in any meetings involving decisions about Afghanistan until all foreign forces have left. Taliban spokesman Zabihullah Mujahid on Wednesday called on the United States to adhere to the deal the group reached with Mr. Trump’s administration.

In Afghanistan’s capital Kabul, government officials said they would carry on with peace talks and their forces would defend the country.

“Now that there is an announcement on foreign troops withdrawal within several months, we need to find a way to co-exist,” said Abdullah Abdullah, a top peace official and former presidential candidate. “We believe that there is no winner in Afghan conflicts and we hope the Taliban realize that too.”

Mr. Biden rejected the idea that U.S. troops could provide the leverage needed for peace, saying: “We gave that argument a decade. It has never proven effective.”

“American troops shouldn’t be used as a bargaining chip between warring parties in other countries,” Mr. Biden said.

Mr. Biden also said the threat of terrorism was not limited to a single country and that leaving American forces in one foreign land at great financial cost did not make sense.

The president made the decision personal, invoking the memory of his late son who served in Iraq and showing a card he carried with the number of U.S. troops killed and wounded in Afghanistan. Visiting Arlington National Cemetery in Virginia, Mr. Biden later said the decision to withdraw was not difficult.

“To me, it was absolutely clear,” Mr. Biden said.

Senator Lindsey Graham was among Mr. Biden’s fiercest critics, saying the withdrawal would backfire by prolonging the conflict and possibly even breathing new life into al-Qaeda.

“What do we lose by pulling out? We lose that insurance policy against another 9/11,” Mr. Graham said.

Critics of the U.S. military involvement say it clearly failed to get the Taliban to end the conflict on America’s terms. Some experts blame endemic corruption in Afghanistan, Taliban safe havens across the border in Pakistan and overly ambitious goals for training Afghan security forces.

Mr. Biden criticized past U.S. aspirations to somehow unify Afghans, a goal that defied the lessons of history over centuries.

Many Afghans believe that the United States is putting them at the mercy of hardline Islamist Taliban insurgents after this announcement.

The withdrawal date was pushed back four months from the May 1 deadline agreed to between the Washington and the insurgents last year—but, this time, there have been no conditions attached to the pullout.

“International forces’ intervention was like a light in a dark night,” Amina, a teacher at a girls school in the northern province of Kunduz, told Reuters.

Amina, who was a child when U.S.-led forces toppled the Taliban in 2001, feels Washington should not leave without making the Taliban agree to accept the changes that have occurred in the country over the past two decades.

Washington is pressing for a settlement between the Afghan government and the Taliban at a conference in Turkey next week, where they hope to reach an agreement on a ceasefire and a power-sharing interim government.

Foreign capitals are pushing the Taliban to attend and reach some sort of agreement that would save the country from another bout of civil war.

“It would have been better if foreign forces had not come at all...At least we could have found a way in the past 20 years, which I think are now just wasted,” Amina said.

Ahmed, who works at an international organization in Kabul, said he and many others had been living in fear of the Taliban returning to power.

“Now foreign forces are preparing to leave us in the hands of the Taliban,” he said, but added it was up to Afghans to overcome their fear.

Munira Harir, a government employee in Kabul, criticized the decision to withdraw at a time when unrest was at its peak.

Afghan women, young government employees, and rights activists have, over the last few months, faced increased attacks, which no group has claimed but the Afghan government blames on the Taliban.

Women have found much more space in public than they did during the Taliban’s puritan rule, which included contempt for women’s rights, blocking their education, forcing nearly all to quit work, restricting their movement and brutally enforcing a strict dress code.

“They [Taliban] will repeat the black history again, and this is not acceptable for women like us, so we are again going to face a wave of migration, and once again the achievements of the last 20 years become zero,” Ms. Harir said.

For Pedram Qazizada, a resident of the western province of Herat, the withdrawal of foreign troops was inevitable.

“Every country that came was gone one day,” he said in reference to the British and Russians before the arrival of the Americans.

But he added that the United States had failed in its mission because, if there were a return to civil war, it would be worse in the face of an emboldened Taliban, who ruled from 1996 to 2001.

“The fact that they are not attending the peace talks means that they consider themselves the winners of this war,” he said.

Some Afghans still hope things will not fall apart.

“This nation was alive before U.S.A., Russia and Britain and after them it will get better...by the grace of almighty Allah, we will build and free our country from the evil of a religious and terrorist virus,” said Noorullah, a shopkeeper in Kabul.

Yasin Darman, 25, a professor at Nangarhar University in the eastern city of Jalalabad, in one of the country’s most dangerous provinces, feels Afghan forces had taken over a majority of security responsibilities and were now capable of preventing a complete Taliban takeover.

“Naturally, with the withdrawal of American troops, the war will intensify for a while, but the Taliban will not win,” he said.