This website requires the use of Javascript to function correctly. Performance and usage will suffer if it remains disabled.
How to Enable Javascript
North Korea May Be Trying to Extract Plutonium, Photos Show

North Korea May Be Trying to Extract Plutonium, Photos Show 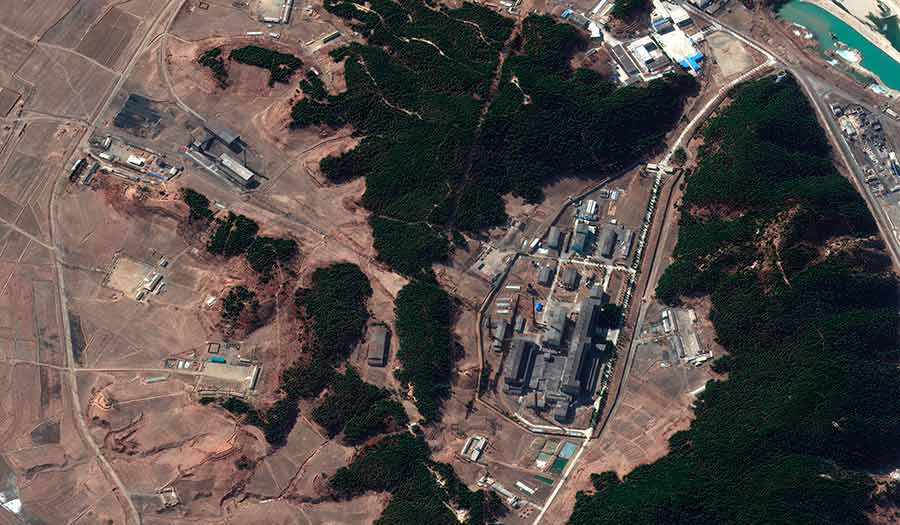 The 38 North website, which specializes in North Korea studies, cited the imagery as indicating that a coal-fired steam plant at the North’s Yongbyon nuclear complex is in operation after about a two-year hiatus. Smoke was observed emanating from the plant’s smokestack at various times from late February and early March.

This suggests “preparations for spent fuel reprocessing could be underway to extract plutonium needed for North Korea’s nuclear weapon,” the website said Wednesday. But it added that “this could also mean simply the facility is being prepped to handle radioactive waste.”

Earlier this week, International Atomic Energy Agency Director General Rafael Mariano Grossi said some nuclear facilities in North Korea continued to operate, citing the operation of the steam plant that serves the radiochemical laboratory at Yongbyon. The laboratory is a facility where plutonium is extracted by reprocessing spent fuel rods removed from reactors.

“The DPRK’s nuclear activities remain a cause for serious concern. The continuation of the DPRK’s nuclear program is a clear violation of relevant UN Security Council resolutions and is deeply regrettable,” Mr. Grossi told the IAEA’s board of governors, according to IAEA’s website. DPRK refers to North Korea’s official name, the Democratic People’s Republic of Korea.

Outside estimates on North Korea’s nuclear arsenal vary. In 2018, a South Korean official told Parliament the North may have 20 bombs to as many as 60.

U.S.-led diplomacy aimed at persuading North Korea to abandon its nuclear program in return for economic and political benefits has been deadlocked since a summit between President Donald Trump and Kim in early 2019. Mr. Trump rejected Mr. Kim’s calls for extensive sanctions relief in return for dismantling the Yongbyon complex in what was seen as a limited denuclearization step because North Korea had already built nuclear weapons and is believed to be running other covert bomb-making facilities.

In January, Mr. Kim vowed to enlarge North Korea’s nuclear arsenal and disclosed an array of high-tech weapons systems targeting the United States, saying the fate of bilateral ties depends on whether Washington withdraw its hostile policy on North Korea.

Some experts say Mr. Kim is attempting to pressure President Joe Biden’s government to return to diplomacy and ease sanctions on the North.