This website requires the use of Javascript to function correctly. Performance and usage will suffer if it remains disabled.
How to Enable Javascript
President Biden: China Should Expect `Extreme Competition’ from U.S. 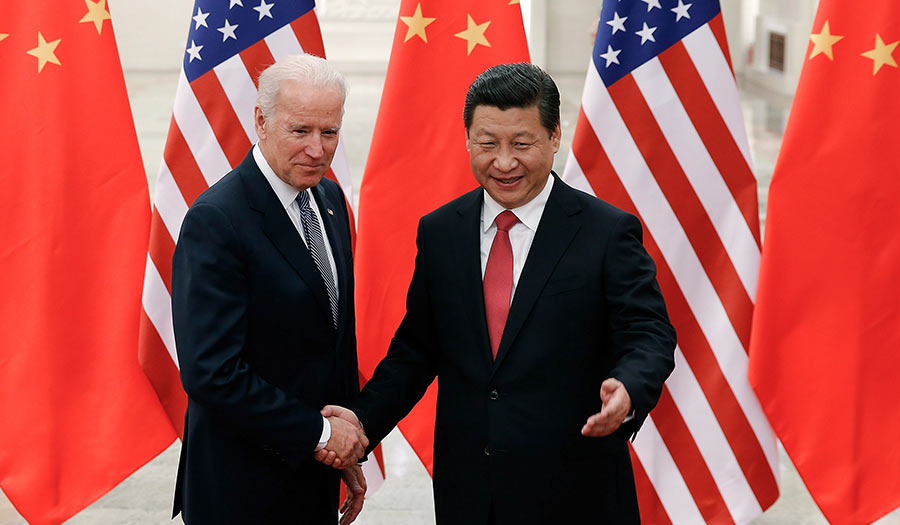 Chinese President Xi Jinping, right, shakes hands with then-U.S. Vice President Joe Biden as they pose for photos at the Great Hall of the People in Beijing (Dec. 4, 2013).

WASHINGTON (AP) – President Joe Biden says China is in for “extreme competition” from the U.S. under his administration, but that the new relationship he wants to forge need not be one of conflict.

In an interview broadcast Sunday, Mr. Biden acknowledged that he has yet to speak with Chinese President Xi Jinping since his inauguration January 20, but noted that the two leaders had met many times when both men served their countries as vice president.

“I know him pretty well,” Mr. Biden said in an excerpt of the interview aired Sunday by CBS’ “Face the Nation.”

When they do speak, they will have “a whole lot to talk about,” Mr. Biden said.

Mr. Biden appears to be concentrating his initial telephone diplomacy on U.S. allies. He so far has spoken with the leaders of Canada, Mexico, the United Kingdom, France, Germany, Japan, South Korea, Australia and the NATO secretary-general.

He also worked in a conversation with Russian President Vladimir Putin.

In the interview, Mr. Biden described Mr. Xi as “very bright” and “very tough” but without “a democratic, small D, bone in his body.”

Shortly after Mr. Biden succeeded President Donald Trump in the White House, a spokesperson for China’s Foreign Ministry said that “after this very difficult and extraordinary time, both the Chinese and American people deserve a better future.” Beijing welcomed the Biden administration’s decision to remain in the World Health Organization and return to the Paris climate agreement.

The new administration, however, is unlikely to significantly alter U.S. policies on trade, Taiwan, human rights and the South China Sea that have angered Mr. Xi’s increasingly assertive government.

Mr. Biden, in the interview taped last Friday, said he has said to Mr. Xi “all along, that we need not have a conflict.” But, Mr. Biden added, there will be “extreme competition. And I’m not going to do it the way that he knows. And that’s because he’s sending signals as well.”