This website requires the use of Javascript to function correctly. Performance and usage will suffer if it remains disabled.
How to Enable Javascript
Search On for More Than 200 After India Glacier Fractures, Sweeping Away All Before It

Search On for More Than 200 After India Glacier Fractures, Sweeping Away All Before It 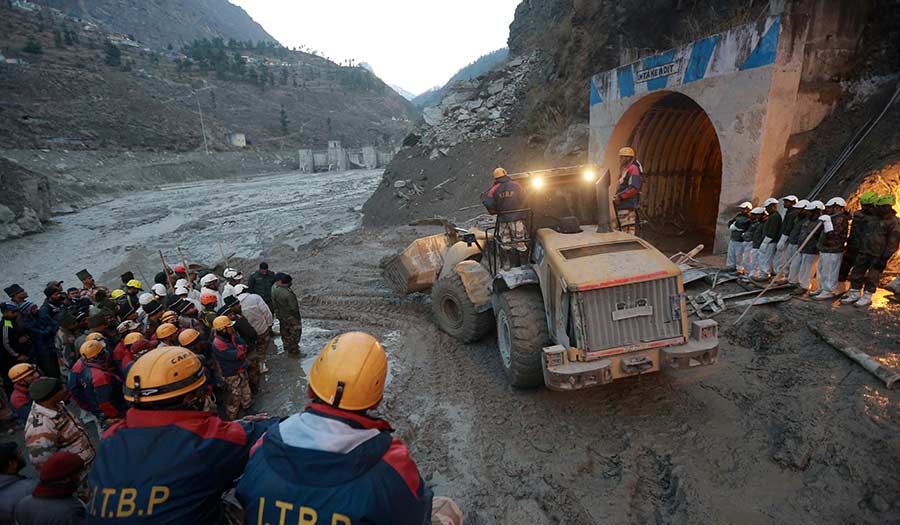 Members of Indo-Tibetan Border Police (ITBP) watch as a machine is used to clear a tunnel after a part of a glacier broke away, in Tapovan in the northern state of Uttarakhand, India (Feb. 8, 2021).

LUCKNOW, India (Reuters) – Indian rescuers searched on Monday for more than 200 people missing after part of a remote Himalayan glacier broke away, sweeping away bridges, breaking dams and sending a torrent of water, rocks and construction debris down a mountain valley.

Sunday’s disaster below Nanda Devi, India’s second-highest peak, swept away the small Rishiganga hydro-electric project and damaged a bigger one further down the Dhauliganga river being built by state firm NTPC.

Eighteen bodies had been recovered so far, officials said.

Most of the missing were people working on the two projects, part of the many the government has been building deep in the mountains of Uttarakhand state as part of a development push.

“Our current hypothesis is that the water accumulated and locked in the debris-snow below the glacier was released when the glacier-rock mass fell,” he said.

“Everything was swept away, people, cattle and trees,” Sangram Singh Rawat, a former village council member of Raini, the site closest to the Rishiganga project, told media.

Experts said it had snowed heavily last week in the Nanda Devi area and it was possible that some of the snow had started melting and may have led to an avalanche.

Rescue squads were focused on drilling their way through a 1.5 mile-long tunnel at the Tapovan Vishnugad hydropower project site that NTPC was building 3 miles downstream where about 30 workers were believed to be trapped.

“We are trying to break open the tunnel, it’s a long one, about 2.5 km,” said Ashok Kumar, the state police chief. He said rescuers had gone 150 yards into the tunnel but debris and slush were slowing progress.

There had been no voice contact yet with anyone in the tunnel, another official said. Heavy equipment has been employed and a dog squad flown to the site.

On Sunday, 12 people were rescued from another much smaller tunnel.

Uttarakhand is prone to flash floods and landslides and the disaster prompted calls by environmentalists for a review of power projects in the ecologically sensitive mountains. In June 2013, record monsoon rains there caused devastating floods that killed nearly 6,000 people.

Environmental groups have blamed construction activity in the mountains.

Himanshu Thakkar, coordinator of the South Asia Network of Dams, Rivers and People, said that there were clear government recommendations against the use of explosives for construction purposes. “There have been violations.”

The disaster also raises questions about the strength of the dams.

“The dams are supposed to withstand much greater force. This was not a monsoon flood, it was much smaller.”