This website requires the use of Javascript to function correctly. Performance and usage will suffer if it remains disabled.
How to Enable Javascript
Guatemalan Security Forces Begin Clearing U.S.-bound Migrant Caravan 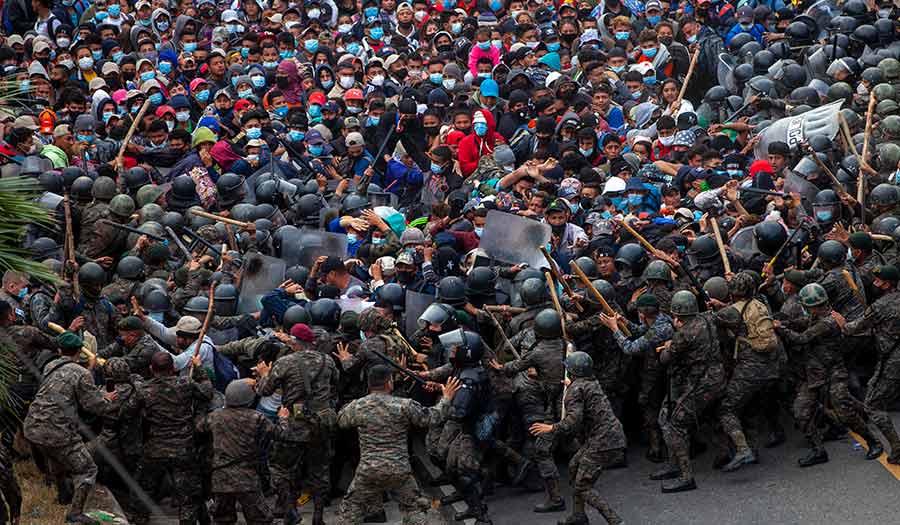 AP/Sandra Sebastian
Honduran migrants attempting to reach the U.S. border clash with Guatemalan soldiers who are trying to prevent them from continuing past a roadblock, in Vado Hondo, Guatemala (Jan. 17, 2021).

VADO HONDO, Guatemala (Reuters) – Guatemalan security forces on Monday began removing hundreds of mostly Honduran migrants from a road where they had been camped out after authorities halted their trek to the United States.

Video footage broadcast on social media and television showed lines of security forces wielding plastic shields moving down the road towards the migrants near the Guatemalan village of Vado Hondo, some 34 miles from the borders of Honduras and El Salvador.

“We’re scared,” said Rosa Alvarez, a Honduran mother who was at the roadblock just before troops began clearing the area. “We just want to pass freely to the United States.”

There were about 2,000 migrants camped out on the highway after they clashed with Guatemalan security forces on Sunday.

As many as 8,000 migrants, including families with young children, have entered Guatemala since Friday, authorities say, fleeing poverty and lawlessness in a region rocked by the coronavirus pandemic and back-to-back hurricanes in November.

Late on Sunday, Guatemalan authorities said they had sent 1,568 migrants back home since Friday, the vast majority to Honduras. Nearly 100 were returned to El Salvador.

Mexican President Andres Manuel Lopez Obrador on Monday warned migrants not to try to enter countries by force, and said he was in touch with both the outgoing and incoming U.S. administrations over the migrant caravan.

Mr. Lopez Obrador said he was hopeful that Mr. Biden would carry out immigration reform and work with Mexico and Central America on a plan that could provide alternatives to migration.