This website requires the use of Javascript to function correctly. Performance and usage will suffer if it remains disabled.
How to Enable Javascript
U.S. Plans to Designate Yemen’s Houthi Movement as Foreign Terrorist Group 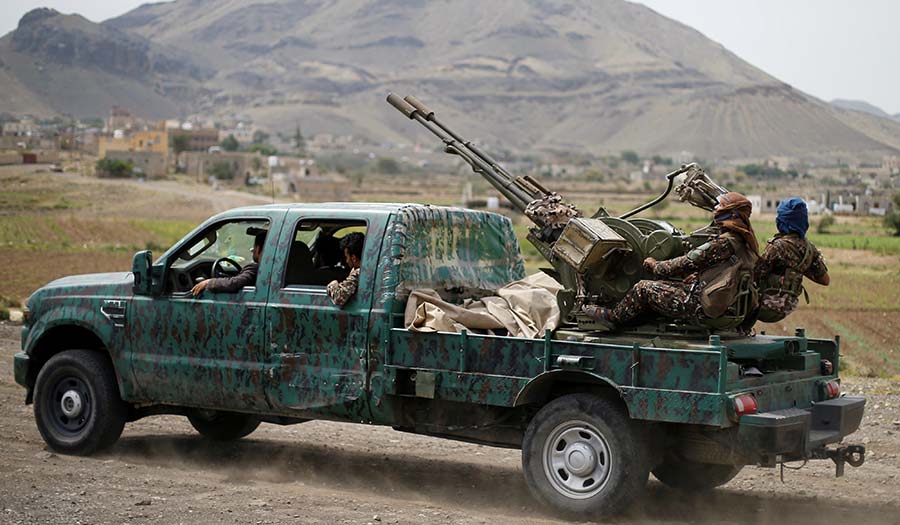 Houthi fighters man a machine gun mounted on a military truck as they parade during a gathering of Houthi loyalists on the outskirts of Sanaa, Yemen on July 8, 2020.

“The Department of State will notify Congress of my intent to designate Ansar Allah, sometimes referred to as the Houthis, as a Foreign Terrorist Organization,” Mr. Pompeo said in a statement late on Sunday.

The decision to blacklist the Iran-aligned group comes as the administration of President-elect Joe Biden prepares to take over from the Trump administration on January 20.

The Trump administration has been piling on sanctions related to Iran in recent weeks, prompting some Biden allies and outside analysts to conclude that Trump aides are seeking to make it harder for the incoming administration to re-engage with Iran and rejoin an international nuclear agreement.

In Tehran, when asked about the U.S. move, Iranian Foreign Ministry spokesman Saeed Khatibzadeh told a weekly news conference: “It is likely that the bankrupt U.S. government might try to further tarnish the United States’ image in its remaining days and poison the American heritage.”

Aid groups and U.N. Secretary-General Antonio Guterres had warned against a possible designation, saying Yemen was in imminent danger of the worst famine the world has seen for decades.

Mr. Pompeo said the United States planned to put in place measures to reduce the impact of the step on humanitarian activity and imports into Yemen, where 80 percent of the population needs help.

The foreign ministry of Yemen’s Saudi-backed government, which the Houthis ousted from power in the capital, Sanaa, in late 2014, supported the designation and called for further “political and legal pressure” on the Houthis.

Saudi Arabia, which has been attacked by cross-border Houthi missiles and drones, has yet to comment.

U.N. officials are trying to revive peace talks to end the war as the country’s suffering is also worsened by an economic and currency collapse and the COVID-19 pandemic.

The Norwegian Refugee Council called for “unambiguous safeguards and guarantees” to ensure sanctions did not prevent food, fuel and medicines from being delivered across a country “in the middle of a full-blown humanitarian catastrophe.”

“We call on...Biden to act upon taking office to ensure Yemeni civilians can still receive life-saving aid,” it said.

Mr. Pompeo said that with the implementation of these designations on January 19, the U.S. Treasury Department would provide licenses that would apply to some humanitarian activities conducted by non-governmental organizations in Yemen and to certain transactions related to critical commodities exports such as food and medicine.

The Treasury Department has previously issued such special licenses to humanitarian groups for heavily sanctioned countries, but international relief officials have said such measures often failed to unblock aid flows as banks and insurance firms worry about running afoul of sanctions.

The Houthi group is the de facto authority in northern Yemen and aid agencies must work with it to deliver assistance. Aid workers and supplies also come in through Houthi-controlled Sanaa airport and Hodeidah port.