This website requires the use of Javascript to function correctly. Performance and usage will suffer if it remains disabled.
How to Enable Javascript
Overdose Deaths Far Outpace COVID-19 Deaths in San Francisco 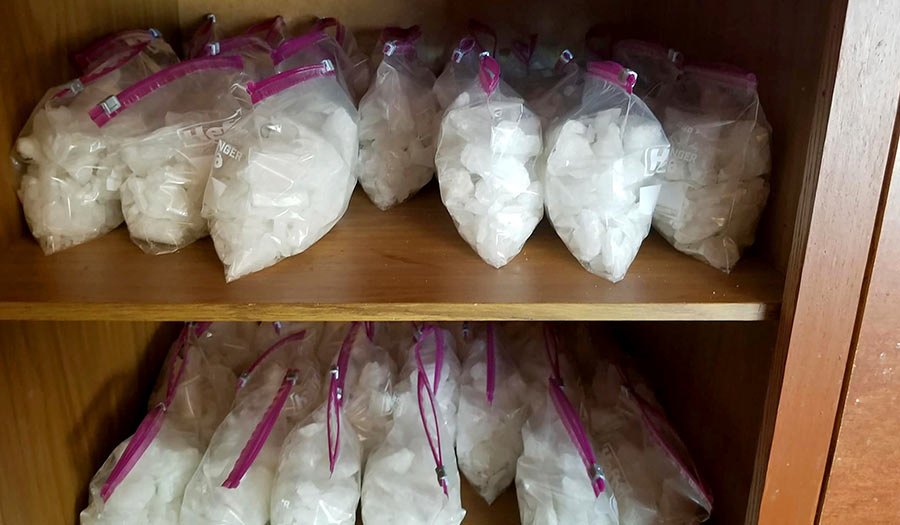 Tulare County Sheriff's Office via AP
Evidence seized after a traffic stop led officers to a major methamphetamine and fentanyl operation, including labs inside three homes and drugs with a street value of $1.5 million in Pixley, California (Jan. 23, 2020).

SAN FRANCISCO (AP) – A record 621 people died of drug overdoses in San Francisco so far this year, a staggering number that far outpaces the 173 deaths from COVID-19 the city has seen thus far.

The crisis fueled by the powerful painkiller fentanyl could have been far worse if it was not for the nearly 3,000 times Narcan was used from January to the beginning of November to save someone from the brink of death, the San Francisco Chronicle reported Saturday.

The data reflects the number of times people report using Narcan to the Drug Overdose Prevention and Education Project, a city-funded program that coordinates San Francisco’s response to overdose or return to refill their supply. Officials at the DOPE Project said that since the numbers are self-reported, they are probably a major undercount.

Last year, 441 people died of drug overdoses—a 70 percent increase from 2018—and 2,610 potential overdoses were prevented by Narcan, a medication commonly sprayed up the nose to reverse an opioid overdose, according to data from the city Medical Examiner’s office and the DOPE Project.

The crisis is deepening because fentanyl, which can be 50 to 100 times more potent than morphine, flooded the city’s drug supply, the newspaper said. Moreover, the coronavirus pandemic has disrupted city services like housing and treatment, and left many people who rely on others to help save them if they overdose to use alone.

While nearly 40 percent of the deaths occurred in the Tenderloin and South of Market neighborhoods near downtown, city data showed the epidemic has touched every part of the city. Many people overdosed in low-income apartment buildings and in city-funded hotel rooms for the homeless. Others died on sidewalks, in alleyways and parks around the city.

Battling Heroin Abuse – A Changing Fight Against an Old Foe
Given increased levels of addiction, law enforcement officials and healthcare workers are abandoning traditional approaches of combatting the drug and opting instead to treat the epidemic’s negative effects.