This website requires the use of Javascript to function correctly. Performance and usage will suffer if it remains disabled.
How to Enable Javascript
Somalia Cuts Diplomatic Ties with Kenya amid Rising Tensions 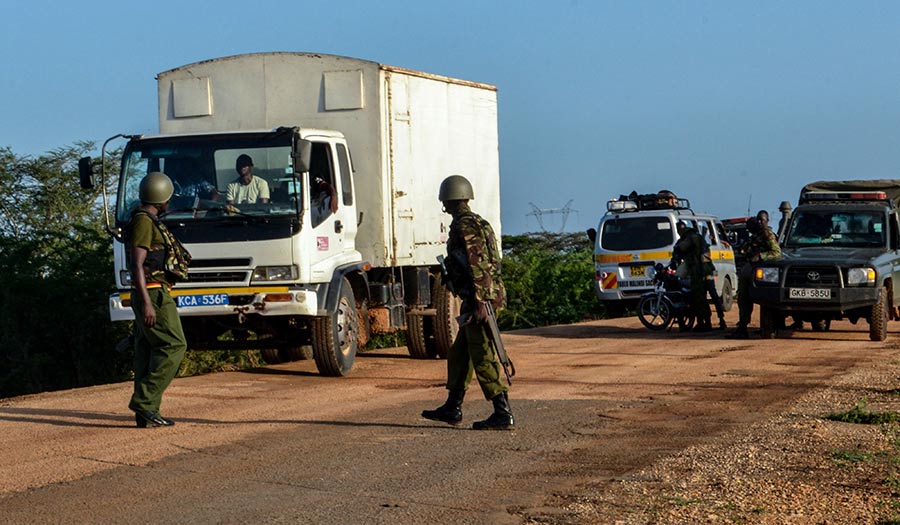 Stringer/AFP via Getty Images
Kenyan police officers check vehicles near the Somalia border after a bus was ambushed by gunmen (Jan. 2, 2020).

NAIROBI, Kenya (AP) – Somalia’s government says it has severed ties with strategic neighbor Kenya “to safeguard the unity, sovereignty, stability of the country.”

The announcement Tuesday came as the leader of the breakaway territory of Somaliland ended a three-day visit to Kenya where he was given treatment similar to that accorded to a head of state in meetings with the Kenyan leadership.

“The Somali government, on the basis of its sovereignty, international law and order, and in fulfillment of its constitutional duty to safeguard the unity, sovereignty and stability of the country, has decided to cut off diplomatic relations with the Government of Kenya,” said Osman Dubbe, Somalia’s information minister on Twitter.

Somaliland broke away from Somalia in 1991 as the country collapsed into warlord-led conflict and it has seen little of the violence and extremist attacks that plague Somalia to the south. Despite lacking international recognition, Somaliland has maintained its own independent government, currency and security system.

Somalia, however, considers Somaliland as part of its territory. Several rounds of talks over possible unification have failed to reach an agreement.

Somali President Mohamed Abdullahi Mohamed, also known as Farmajo, and Somaliland leader Muse Bihi Abdi met in February, the first meeting between the two, who both took office in 2017.

The meeting was brokered by Ethiopia’s Nobel Peace Prize-winning Prime Minister Abiy Ahmed in Addis Ababa, Ethiopia’s capital, but it did not result in a breakthrough agreement.

Kenya’s government spokesman Colonel Cyrus Oguna said a committee has been set up to normalize relations between the two countries.

“As a country, we have been very kind and accommodating because you know even in Daadab [refugee center] we have camps that currently house over 200,000 people from the neighboring country and therefore we have a lot of commonality between these two countries and anything that is capable of undermining that, is, of course, something that efforts must be put in place to ensure it is resolved,” he told reporters.

Tensions between the two countries became evident in late November when Somalia expelled Kenya’s ambassador to the country and ordered its ambassador to return home.

Horn of Africa Analyst Rashid Abdi said that faced with tough competition in the coming parliamentary and presidential elections in Somalia, scheduled for December 2020 and February 2021, respectively, Somalia’s president is stirring up altercations with foreign countries to try to consolidate the electorate behind him.