This website requires the use of Javascript to function correctly. Performance and usage will suffer if it remains disabled.
How to Enable Javascript
More than 1 Billion People Face Displacement by 2050 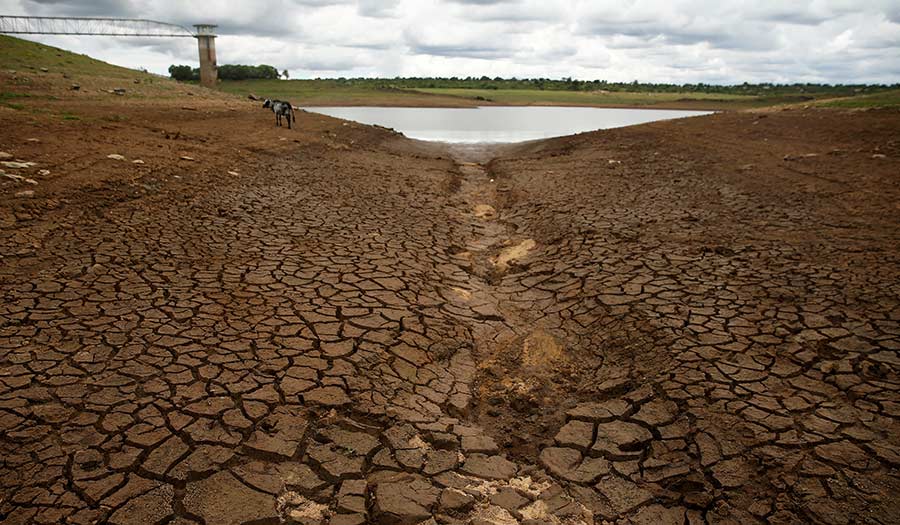 Reuters/Philimon Bulawayo
Caked mud surrounds a small patch of water as a region deals with a prolonged drought at a dam near Bulawayo, Zimbabwe (Jan. 18, 2020).

London (Reuters) – Rapid population growth, lack of access to food and water and increased exposure to natural disasters mean more than 1 billion people face being displaced by 2050, according to a new analysis of global ecological threats.

Compiled by the Institute for Economics and Peace (IEP), a think-tank that produces annual terrorism and peace indexes, the Ecological Threat Register uses data from the United Nations and other sources to assess eight ecological threats and predict which countries and regions are most at risk.

With the world’s population forecast to rise to nearly 10 billion by 2050, intensifying the scramble for resources and fueling conflict, the research shows as many as 1.2 billion people living in vulnerable areas of sub-Saharan Africa, Central Asia and the Middle East may be forced to migrate by 2050.

By comparison, ecological factors and conflict led to the displacement of some 30 million people in 2019, the report said.

“This will have huge social and political impacts, not just in the developing world, but also in the developed, as mass displacement will lead to larger refugee flows to the most developed countries,” said Steve Killelea, IEP’s founder.

The register groups the threats into two broad categories: food insecurity, water scarcity and population growth in one; and natural disasters including floods, droughts and cyclones in the other.

The result is an analysis assessing how many threats each of some 150 countries faces and their capacity to withstand them.

While some, such as India and China, are most threatened by water scarcity in the coming decades, others like Pakistan, Iran, Mozambique, Kenya and Madagascar face a toxic combination of threats, as well as a diminishing ability to deal with them.

“These countries are broadly stable now but have high exposure to ecological threats and low and deteriorating ‘positive peace,’ which means they are at higher risk of future collapse,” the 90-page analysis found.

Mr. Killelea said the world now has 60 percent less fresh water available than it did 50 years ago, while demand for food is forecast to rise by 50 percent in the next 30 years, driven in large part by the expansion of the middle class in Asia.

Those factors, combined with natural disasters, mean even stable states are vulnerable by 2050.