This website requires the use of Javascript to function correctly. Performance and usage will suffer if it remains disabled.
How to Enable Javascript
Kenoshians Face ‘Wake-up Call’ After Tumultuous, Painful Week of Violence 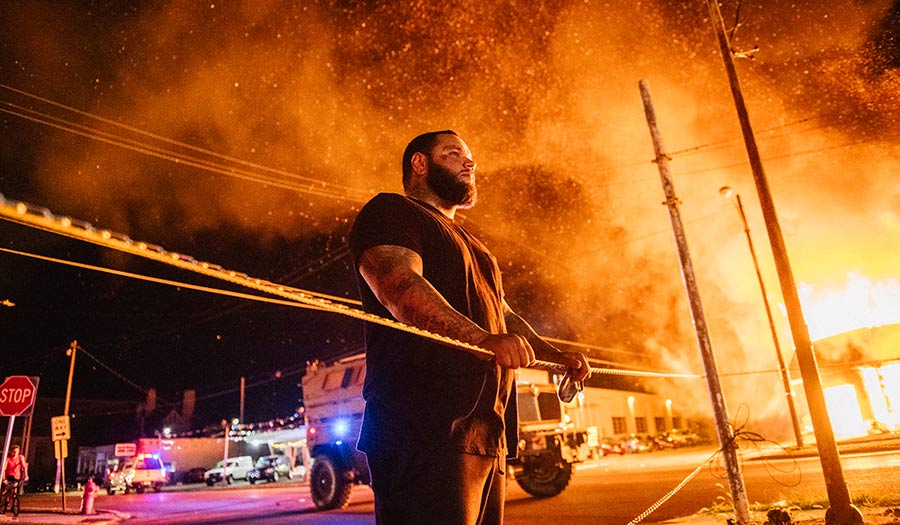 Kenosha, Wisconsin (Reuters) – Five decades after he came with his migrant-worker family from Texas to Kenosha to pick cucumbers and potatoes in the fields outside of town, Tony Garcia is a prominent community member who has sat on the several local boards.

So last week when people destroyed businesses during anti-racism protests in Kenosha’s Uptown neighborhood where Garcia grew up and owns commercial property, the 63-year-old became especially infuriated as he watched the chaos.

“This is the American dream and from one night to another, it was shattered,” said Mr. Garcia, a member of the Kenosha Unified School District Board, as he sat in front of his boarded up buildings that survived the violence. “This is a wake-up call.”

Mr. Garcia was one of about two dozen Kenosha residents who expressed their dismay in Reuters interviews over riots and destruction of several businesses following the shooting by a white police officer that left a black man, Jacob Blake, paralyzed and the shooting of three demonstrators—two fatally—by a teenager armed with an assault rifle.

Days after the shootings, a tense calm loomed over the tight-knit city of 100,000 people and tree-lined streets on the shores of Lake Michigan. Residents mowed their lawns, grocery shopped and launched their boats out onto the bright blue lake waters as National Guard troops guarded government buildings and police blocked one of the main thoroughfares in Kenosha.

A 7 p.m. curfew left the city of quaint taverns deserted before sunset.

Kenosha is the latest U.S. city where protests against racism and excessive use of force by police at times degenerated into violence this summer since the death in May of George Floyd.

Rioters came to Kenosha from other places, said retired resident Vickie Kwasny as she wiped tears from her face.

“We are not the last community that this will happen to,” Ms. Kwasny said while looking over a dozens of torched cars in a parking lot near her home. “I hope we can heal. We have a lot of cleaning up to do.”

Kenosha was known for generations as a car-building town. It was the home of Kenosha Engine, an automotive plant that operated for a more than a century until it was closed by Chrysler in 2010, leaving 5,000 people out of work.

Over the last decade, Kenosha has bounced back. Now a nearby Amazon facility along with the headquarters of Uline and Snap-on are some of the city’s largest employers as Kenosha’s unemployment rate hovered around 4 percent before the novel coronavirus pandemic sent it soaring above 10 percent.

The violence has not swayed life-long resident Chenesse Brown, a 31-year-old teacher, who handed out water and snacks as she held her two-month old godson during a march on Saturday.

“This morning…everything caught up to me and I just sat on the foot of my bed and cried. Because this is not the Kenosha that we know,” she said. “It’s surreal, overwhelming and saddening, but then I come out and see this and it reminds that…we have our faith and our hope.”