This website requires the use of Javascript to function correctly. Performance and usage will suffer if it remains disabled.
How to Enable Javascript
Massive Blast Rocks Beirut with at Least 100 Killed, Thousands Injured 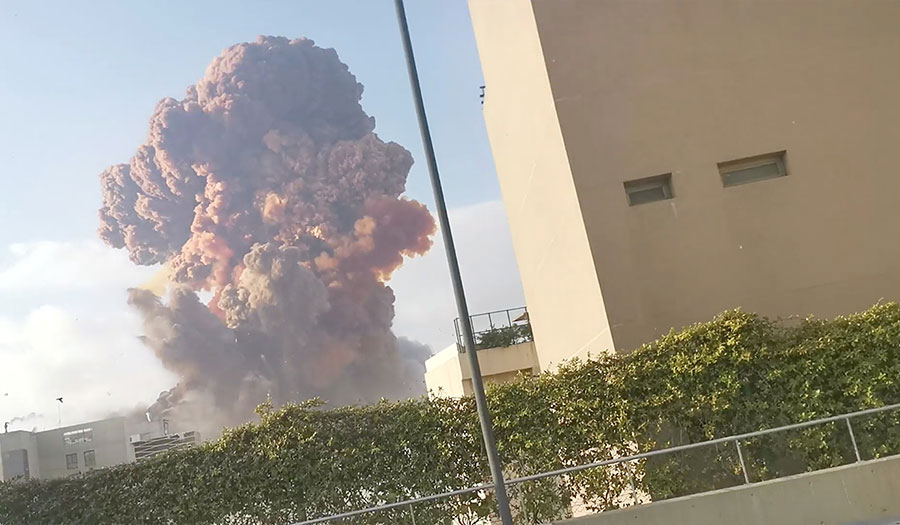 Karim Sokhn/Instagram/Ksokhn Thebikekitchenbeirut/via Reuters
Smoke rises after an explosion in Beirut, Lebanon, in this picture obtained from a social media video (Aug. 4, 2020).

A huge explosion near the center of Beirut killed at least 100 people, injured at least 5,000 and sent shockwaves across the Lebanese capital on Tuesday, shattering windows and causing apartment balconies to collapse.

The most powerful explosion to hit Beirut in years shook the ground, leaving some residents thinking an earthquake had struck. Dazed and weeping, some of them wounded, people walked through streets checking to see if relatives were hurt.

Footage of the explosion shared by residents on social media initially showed a column of smoke rising from the port district followed by an enormous blast that sent a ball of white smoke and fireball into the sky. Those filming the incident from high buildings in other areas of the city were thrown backwards by the shock.

Lebanese President Michel Aoun called for an emergency meeting of the country’s Supreme Defense Council, according to the presidency’s Twitter account. Prime Minister Hassan Diab called for a day of mourning on Wednesday.

The explosion occurred three days before a UN-backed court is due to deliver a verdict in the trial of four suspects from the Shi’ite group Hezbollah over a 2005 bombing which killed former prime minister Rafik al-Hariri and 21 other people.

It was not immediately clear what caused the blaze that set off the blast.

Internal Security Chief Abbas Ibrahim, touring the port area, said he would not pre-empt investigations. An Israeli official said Israel, which has fought several wars with Lebanon, had nothing to do with the blast.

The governor of Beirut port told Sky News that a team of firefighters at the scene had “disappeared” after the explosion.

“I saw a fireball and smoke billowing over Beirut. People were screaming and running, bleeding. Balconies were blown off buildings. Glass in high-rise buildings shattered and fell to the street,” said a Reuters witness.

Residents said glass was broken in houses from Raouche, on the Mediterranean city’s western tip, to Rabieh 6 miles east. For a long time after the blast, ambulance sirens sounded across the city and helicopters hovered above.

The health minister told Reuters there was a “very high number” of injured. Al Mayadeen TV said hundreds were wounded.

Another Reuters witness said she saw heavy grey smoke near the port area and then heard an explosion and saw flames and black smoke: “All the downtown area windows are smashed and there are wounded people walking around. It is total chaos.”

UN spokesman Farhan Haq told reporters it was not immediately clear what the cause was, and that there was no indication of any injuries to any UN personnel.

“We do not have information about what has happened precisely, what has caused this, whether it’s accidental or manmade act,” he said.

Lebanese Red Cross official Georges Kettaneh said there were dead and wounded, but did not have an exact figure, just saying there were hundreds of casualties.

An Israeli government official says Israel “had nothing to do” with the blast.

Israel and Lebanon’s Hezbollah militant group are bitter enemies, and tensions have been high following a series of recent clashes. Earlier Tuesday, Prime Minister Benjamin Netanyahu warned Hezbollah Israel would not hesitate to strike again if it felt it was necessary.