This website requires the use of Javascript to function correctly. Performance and usage will suffer if it remains disabled.
How to Enable Javascript
Why Is Latin America Collapsing?

Why Is Latin America Collapsing? 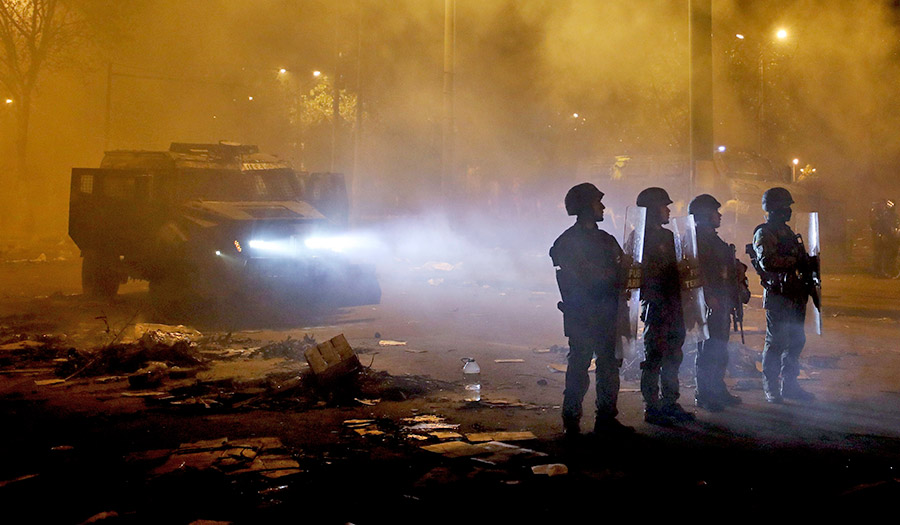 AP/Fernando Vergara
Soldiers guard a park in Quito, Ecuador, to enforce a curfew after more than a week of protests devolved into violence (Oct. 12, 2019).

THE ASSOCIATED PRESS - Chile is one of the richest countries in the region. Haiti is the poorest. Ecuador has a centrist government. Bolivia’s is socialist.

Yet, from Port-au-Prince to Santiago, furious demonstrators were marching this week to demand fundamental change, part of a wave of often-violent protests that has set tires, government offices, trains and metro stations ablaze across Latin America and the Caribbean.

What’s driving the protests thousands of miles apart, across countries with profoundly different politics, economies, cultures and histories? One important factor: Despite their differences, the countries hit by fiery protests this month saw often-dizzying commodity-driven growth in the first decade of this century, followed by a slump or stall as prices dropped for key exports. Even Haiti, its own economy largely stagnant, saw billions in aid from oil-rich Venezuela flood in, then disappear.

That pattern of boom then slackening is a dangerous one for less-than-agile leaders. It expands the middle class, creating citizens who feel entitled to receive more from their governments, and empowered to demand it. And it sharpens the sense of unfairness for those left out of the boom, who see neighbors prospering while they stand still or slide backward.

Chile, the world’s largest copper producer, boomed from 2000 to 2014 before growth dropped off. The average Chilean still earns roughly $560 to $700 a month, income that makes it hard for many to pay their bills. Then, last week, an independent panel implemented a 4-cent subway fare increase that the Chilean government initially said was needed to cope with rising oil prices and a weaker local currency.

For thousands of Chileans, it was a final indignity after years of struggling as the country prospered. Clashes wracked Chile for a sixth day Wednesday, with the death toll at 18 in an upheaval that has almost paralyzed a country long seen as an oasis of stability.

“People went out to protest because they feel the government cares more about the wealthy, and that social programs help the very poor but the rest of the population is left to care for themselves,” said Patricio Navia, an adjunct assistant professor at the Center for Latin American and Caribbean Studies at New York University. “They are not poor enough to get government subsidies, nor rich enough to get government tax credits. They revolted to make their voice heard.”

Marta Lagos, the Santiago, Chile-based director of the polling firm Latinobarometro, said Chile’s growth rates hid the over-concentration of wealth in the hands of the elite.

Like Chile, oil-rich Ecuador saw a steep rise in GDP as oil topped $100 a barrel and President Rafael Correa built multi-lane highways, airports and universities. Then oil slumped, leaving Ecuador with billions in debt and a steep annual budget shortfall.

Mr. Correa’s successor, Lenin Moreno, took out a three-year $4.2 billion IMF credit line and this month announced a $1.3 billion austerity package that included the elimination of fuel subsidies and a resulting sharp rise in gasoline and diesel prices. That sent Ecuadorians to the streets, led by the country’s well-organized, mostly rural indigenous peoples, many of whom are subsistence farmers who saw little to no benefit from the boom years.

As a law professor, Mariana Yumbay is better off than most people in Ecuador’s mountainous Bolivar province, who raise corn and potato or herds of cattle, pigs and sheep. Even as Ecuador prospered under Mr. Correa, indigenous farmers in Bolivar depended on rainfall because they have no irrigation networks, she said. More than 40 percent of children are malnourished and many people live on about $30 a month.

“Unfortunately the state hasn’t had a policy of steering economic resources to pull indigenous people and farmers out of poverty,” Ms. Yumbay, 46, said this month as she protested outside Ecuador’s National Assembly.

Mr. Moreno ended the protests by agreeing to restore the subsidies, a solution that analysts said left him weakened and facing the same economic troubles that loomed before nearly two weeks of often-violent protests.

Haiti was worse off than any other country in the region at the start of the new century but saw an infusion of billions of dollars in highly subsidized oil from Venezuela starting in 2009. Another factor: the flood of international aid after the country’s devastating 2010 earthquake.

When oil slumped and Venezuela’s economy collapsed, the subsidized fuel ended, and the already-impoverished island suffered regular gasoline shortages. Investigations by Haiti’s Senate and a federal auditor alleged that government officials had embezzled and misappropriated billions in proceeds from the Venezuelan program known as Petrocaribe.

Fueled partly by a group of internet-savvy young Haitians known as the Petrocaribe Challengers, street protests erupted that organizers say will not stop until President Jovenel Moise leaves office.

In Bolivia, President Evo Morales has had 14 years of low inflation and strong GDP growth of 4 percent a year on average, thanks largely to earnings during the commodities-boom years. In recent years, the country’s income from natural gas sales has been dropping due to falling prices, drops in reserves and less demand from Brazil and Argentina. Experts say the economy is looking increasingly fragile. Against that backdrop, the popularity he won for his economic management and infrastructure investment has been weakened by corruption scandals in his administration and his insistence on seeking re-election despite losing a referendum on the issue.

A new round of clashes broke out Thursday as demonstrators returned to Chile’s streets, dissatisfied with economic concessions announced by the government in a bid to curb a week of deadly violence.

Stone-throwing protesters did battle with police firing tear gas and water cannons in the capital, Santiago, and the port of Valparaiso, as hundreds of demonstrators gathered in city squares around the country. Clashes continued into the night.

At least 18 people have died in the turmoil that has swept the South American nation.

Cesar Millar Saez, a retiree, criticized the looting and vandalism of the past days but said it is essential to protest for higher pensions and wages.

Maria Lopez, who works at a home for the elderly, said the same thing. The government’s concessions, she said, are not enough.