This website requires the use of Javascript to function correctly. Performance and usage will suffer if it remains disabled.
How to Enable Javascript
Congo’s Ebola Outbreak Now Global Emergency 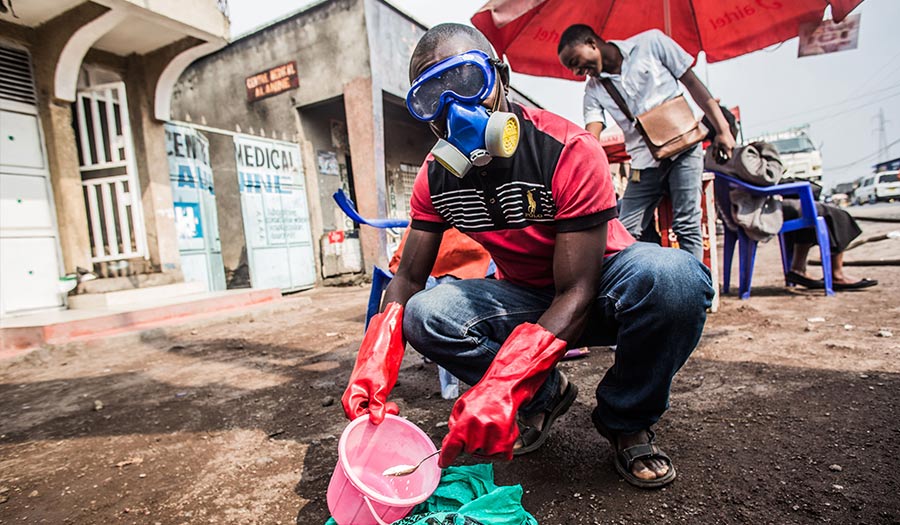 A health worker prepares a cleaning solution in Goma, a city in the eastern Democratic Republic of Congo where Ebola has spread (July 31, 2019).

After feeling sick for several days a man boarded a bus to eastern Congo’s largest city. Only upon arrival at his destination did anyone suspect he had the highly deadly and infectious Ebola virus.

During his trip to Goma, the 46-year-old man managed to pass through three health checkpoints aimed at stopping those who are sick with Ebola and contagious.

Now health authorities along his route are trying to hunt down all those he may have been in contact with after the man became Goma’s first confirmed Ebola case on July 14.

Somehow he was able to evade detection during the roadside health checkpoints, when all travelers get off the bus, wash their hands and have their temperature taken.

“During the checks, he did not seem to show signs of the disease. In addition, at each checkpoint he wrote different names and surnames on the lists of travelers, probably indicating his desire to hide his identity and state of health,” Congo’s health ministry said.

Containing the spread of Ebola in Goma is a crucial task. The city is home to more than two million people and the largest to confirm a case of the disease since the epidemic there began nearly a year ago.

“It’s the door of this region to the rest of the world,” said Dr. Harouna Djingarey, infectious disease program manager for the World Health Organization’s regional office in eastern Congo. “From here you can fly to everywhere in the world. If we don’t have the control over the contacts, some high-risk contacts may fly, take a plane and go somewhere.”

Health experts have long feared that the disease responsible for killing more than 1,800 people since August 2018 would eventually make its way to Goma, to the point of preemptively vaccinating more than 3,000 frontline health workers. Neighboring Rwanda also has taken measures to stop the disease from spreading across its border.

Goma is an important transit point for the region and beyond and a bustling trade hub drawing travelers from throughout Congo’s east.

Speaking at a UN meeting in Geneva on the outbreak, Congo’s minister of health, Dr. Oly Ilunga, called the spread of Ebola to the city “a warning.”

The World Health Organization agreed and quickly labeled the outbreak an international health emergency, something it had declined to do on three previous occasions. This designation often brings greater international attention and aid, along with concerns that nervous governments might overreact with border closures.

This Ebola outbreak is now the second-deadliest in history. WHO has estimated “hundreds of millions” of dollars will be needed to stop the outbreak.

WHO and partners have also said the response has been hampered by a lack of resources, repeatedly citing a $50 million gap in its Ebola containment plan.

“Unless there’s a big scale-up in the [funding] response, we’re unlikely to be successful in getting to zero cases,” UN Emergency Relief Coordinator Mark Lowcock said.

A disease outbreak is one thing. Yet it is unfolding in the turbulent part of northeastern Congo where dozens of rebel groups are active and wary communities had never experienced the disease before. Health workers have faced misinformation and even deadly attacks that have hampered the critical work of tracing contacts of infected people and deploying an experimental but effective Ebola vaccine.

The WHO’s declaration quickly led to fears among some Congolese authorities and residents that governments might close borders or take other measures that could hurt the local economy.

One Congolese, 25-year-old Clovis Mutsuva, told The Associated Press that while the declaration might bring in needed funds to help contain the outbreak, any border closures would make locals “more unhappy.” A lot of key local merchandise such as fuel comes from Kenya and neighboring Uganda, Mr. Mutsuva said.

“This scares us because Goma risks becoming isolated from the rest of the world,” added Katembo Kabunga as some people in the city received vaccinations.

June saw the first confirmed cases in Uganda and a case just 43 miles from the border with South Sudan, where a recently ended civil war badly weakened the health system.

Some aid groups say they hope the declaration will spark a radical shift in Ebola response efforts to help address community resistance. The medical charity Doctors Without Borders said the outbreak is still not under control.

This is the fifth such declaration in history. Previous emergencies were declared for the devastating 2014-16 Ebola outbreak in West Africa that killed more than 11,000 people, the emergence of Zika in the Americas, the swine flu pandemic and polio.

WHO defines a global emergency as an “extraordinary event” that constitutes a risk to other countries and requires a coordinated international response. WHO was heavily criticized for its sluggish response to the West Africa outbreak, which it repeatedly declined to declare a global emergency until the virus was spreading explosively in three countries and nearly 1,000 people were dead.

As the global community springs more fully into action, those in the DRC are doing what they can to survive.

“God help us if Ebola is now in Goma,” said Baudouine Rudahigwa, 30. “My children are now on alert that they can’t greet or play with others. They are washing their hands all the time.”