This website requires the use of Javascript to function correctly. Performance and usage will suffer if it remains disabled.
How to Enable Javascript
North Korea Supplying Syria’s Chemical Weapons Program, UN Finds 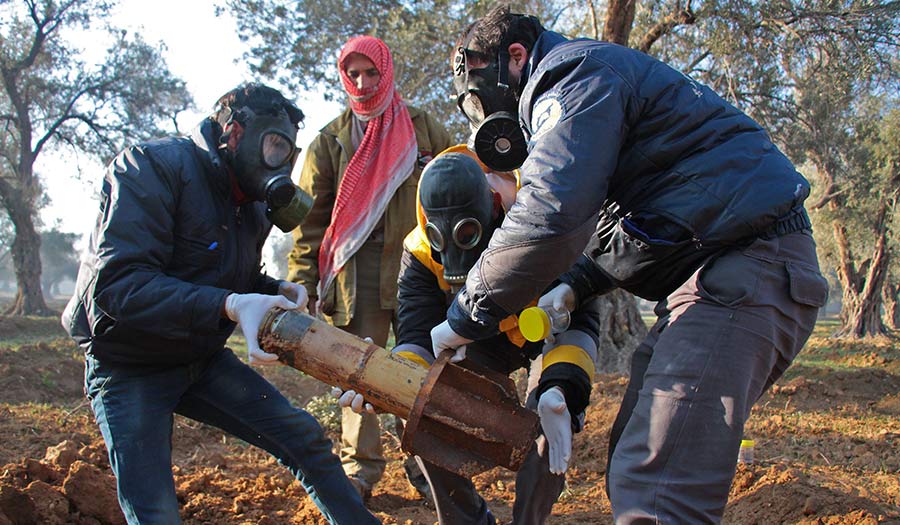 Hamza Al-Ajweh/AFP/Getty Images
Members of the civil defense remove the remnants of a rocket reportedly fired by regime forces on the outskirts of the rebel-held Syrian town of Douma (Feb. 1, 2018). Three people suffered respiratory problems, and local inhabitants complained of a chemical attack.

According to a panel of UN investigators, who reviewed North Korea’s compliance with international sanctions, about 40 unreported shipments were made between the two nations between 2012 and 2017. The cargo of these shipments included acid-resistant tiles, valves and thermometers—materials used for chemical weapons—the panel stated in a report. In addition, North Korean missile specialists have been spotted at chemical weapons facilities in Syria.

It is believed Pyongyang provided these military supplies to Syria in return for cash, as the communist state struggles against the weight of international sanctions posed in response to its nuclear weapons program. The UN report asserts that North Korea trades illegally with scores of other countries in the Middle East, Africa and Latin America.

The findings back reports by Syrian citizens regarding chemical attacks launched by forces supporting President Bashar Assad in eastern Ghouta, a rebel-held suburb of the capital Damascus.

“Since the start of the Syrian civil war in 2011, there have been suspicions that North Korea was providing equipment and expertise to maintain the chemical weapons program of Syria’s president,” The New York Times reported. “Those suspicions were not assuaged when in 2013 Syria signed onto the Chemical Weapons Convention and claimed to give up its chemical weapons stocks.”

“We knew stuff was going on,” William Newcomb, who was a member of the UN panel of experts on North Korea from 2011 to 2014, told the news outlet. “We really wanted to up the game on chemical weapons programs, and we just weren’t able to get what we needed to do so.”