This website requires the use of Javascript to function correctly. Performance and usage will suffer if it remains disabled.
How to Enable Javascript
Baltimore Hits Highest Per Capita Murder Rate Even Though U.S. Rate Drops 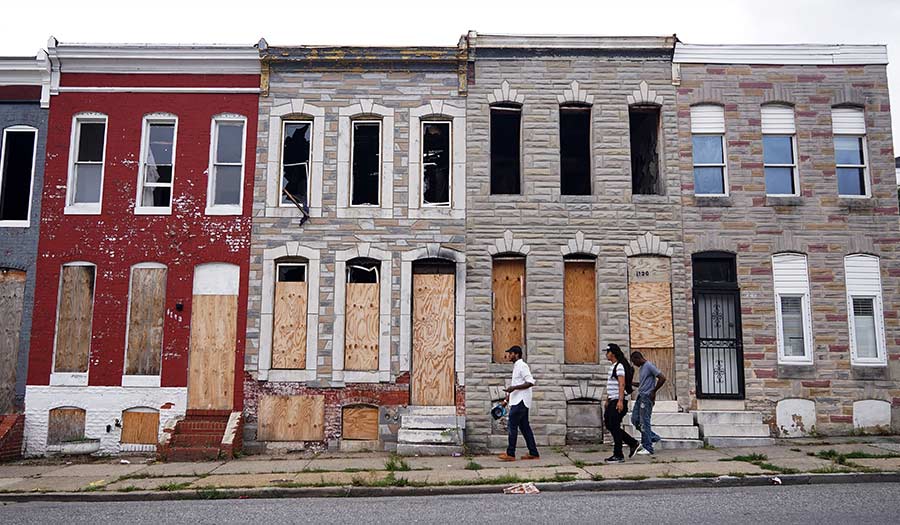 Mandel Ngan/AFP/Getty Images
Pedestrians pass by a row of boarded up houses in east Baltimore (Aug. 8, 2017).

With a few days left in the calendar year, Baltimore hit a record of 343 homicides—the highest recorded per capita rate of homicides.

That is almost one killing a day in an area just 100 square miles with a tenth of the population of New York City, which saw its own murder rate return to 1950s levels this year.

According to a map produced by the media outlet, in just the last month, Baltimore saw 28 homicides in 30 days.

“No one is proud of this violence,” Baltimore police spokesman T.J. Smith told Washington radio station WTOP earlier this year. “It shouldn’t be tolerated. We should be doing what we can to make sure there is not another person who is associated with that number.”

“Guns, gangs and drugs are what’s driving much of this,” he later stated.

The news is discouraging for the city given that the country as a whole is experiencing a drop in its homicide rate. Both Baltimore and Charlotte, North Carolina, had been projected to see their murder rates rise by 54.6 percent and 11.3 percent respectively, according to a September study published by New York University School of Law’s Brennan Center for Justice.

“The overall crime rate in the 30 largest cities in 2017 is estimated to decline slightly from the previous year, falling by 2.7 percent,” an analysis of the report by the center stated. “If this trend holds, crime rates will remain near historic lows.”

“Large decreases this year in Chicago and Detroit, as well as small decreases in other cities, contributed to this decline. The murder rate in Chicago—which increased significantly in 2015 and 2016—is projected to decline by 11.9 percent in 2017. It remains 62.4 percent above 2014 levels. The murder rate in Detroit is estimated to fall by 9.8 percent. New York City’s murder rate will also decline again, to 3.3 killings per 100,000 people.”

While the report’s co-author Ames Grawert said in the analysis that this is “welcome news” as 2017 ends, “there are some cities where violence has increased, and those concerning spikes need to be better understood and addressed.” For instance, Charlotte’s homicide rate this year was at its highest in 25 years.

To learn more about the tragedy unfolding on Baltimore’s streets and the factors of the city’s violence, read The Real Truth article Welcome to Baltimore: Where It’s “Easier to Get a Gun Than a Job”.