This website requires the use of Javascript to function correctly. Performance and usage will suffer if it remains disabled.
How to Enable Javascript
Welcome to Baltimore: Where It’s “Easier to Get a Gun Than a Job”

Welcome to Baltimore: Where It’s “Easier to Get a Gun Than a Job” 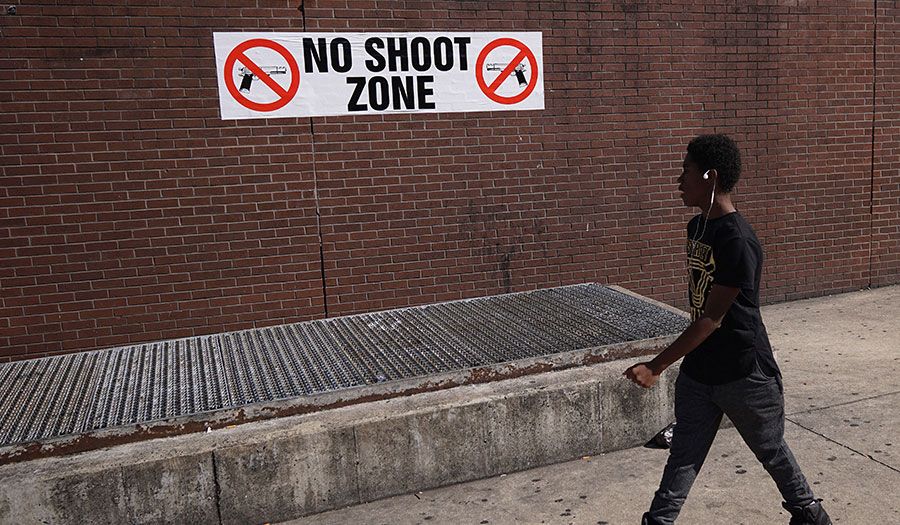 Mandel Ngan/AFP/Getty Images
Elusive peace: A young man walks past a sign with a message to end gun violence at the Penn North metro station in the Sandtown neighborhood of west Baltimore, Maryland (Aug. 8, 2017).

It’s often called “Bodymore, Murderland.” The seaport city of Baltimore, Maryland, is in the midst of an unprecedented spate of homicide deaths, with 242 people killed already this year—207 by guns alone. In contrast, the nation’s capital, Washington, D.C., just an hour’s drive away and with a similar-sized population, has had only 41 murders so far in 2017.

Baltimore’s per capita murder rate is double that of Chicago’s, more than triple Washington, D.C.’s, and is the second-highest below St. Louis. And these numbers do not even account for non-fatal shootings.

The Baltimore Sun reported that violence over the longer Labor Day weekend left seven men dead. A city lawmaker’s 22-year-old grandson was among the victims.

“‘It’s touched my family now,’ Branch said…three hours after he said his grandson Tyrone was killed in northeast Baltimore.

“‘It’s just unacceptable that we’re going to keep going on like this,’ he said. ‘We’ve got to find a solution.”

The city has seen these high numbers before. Each year in the 1990s, more than 300 people were killed in the city’s streets. One journalist who grew up in Baltimore observed that it was always easier to get a gun than a job.

The stories emerging from Baltimore are truly heartbreaking, with the blood of the city’s sons and daughters being spilled senselessly. Each gruesome statistic represents a tragic story that affects the lives of hundreds of people. Family and friends are left to live out the rest of their years in mourning.

In one instance, a man was selling shoes from his car when he was shot and killed during a robbery. Police found his 10-month-old daughter strapped in a car seat in his vehicle, unharmed but now forced to grow up without a father.

Another name stands out in the crowd of deaths: Trayvon Chesley. The 22-year-old police officer lost his father, Troy Chesley, also a police officer, in 2007. In April 2017, Trayvon was shot in the head.

In early August, communities across Baltimore banded together to call for a ceasefire starting Friday, August 4. All they asked for was one weekend of peace.

It never came. Two people were killed from gun violence that Saturday, with another death occurring just after the hoped for ceasefire ended.

The most tragic element of the killings is the impact on children. Many live in constant fear and have been banned from playing outside by their parents.

One mother made this difficult decision after her 8-year-old daughter was shot in the foot by a stray bullet last year. The man thought to have fired the shot was himself killed just two months later.

The Philadelphia Inquirer quoted one former city official who put the problem in perspective: “People don’t realize it’s worse than Chicago,” Otis Rolley said, who is former Baltimore planning director and a one-time mayoral candidate. His 23-year-old nephew, who was a former marine, was the 15th person killed in the city this year.

Mr. Rolley said: “This man was trained by the U.S. government and had the skills and ability to survive in a combat situation overseas but was unable to navigate the streets of Baltimore. And that is a scary, scary thing.”

But why is this violence so much worse in Baltimore?

A number of factors are at play: increased drug abuse, skyrocketing poverty rates, broken families, and the judicial system. An estimated 25 percent of Baltimore’s citizens live in impoverished conditions.

Then there is the shrinking police force, down 200 officers due to budget cuts.

On top of this, there is widespread pressure on the city’s police department to enact major reforms. The Justice Department under the Obama administration released a scathing report showing widespread problems of racism and incompetence in the Baltimore Police Department.

Many experts also believe the “Ferguson effect” has taken hold—where police officers are under siege from public pressure and are thus more hesitant to enforce the law. Named after Ferguson, Missouri, where Michael Brown was killed by a police officer in 2014, the data indicate that something changed after this widely publicized incident.

Yet with homicide numbers growing by the day, it seems all Baltimore’s residents can do is cling to the hope that next year may be different.