This website requires the use of Javascript to function correctly. Performance and usage will suffer if it remains disabled.
How to Enable Javascript
The Holy Land’s Major Water Bodies Are Drying Out

The Holy Land’s Major Water Bodies Are Drying Out 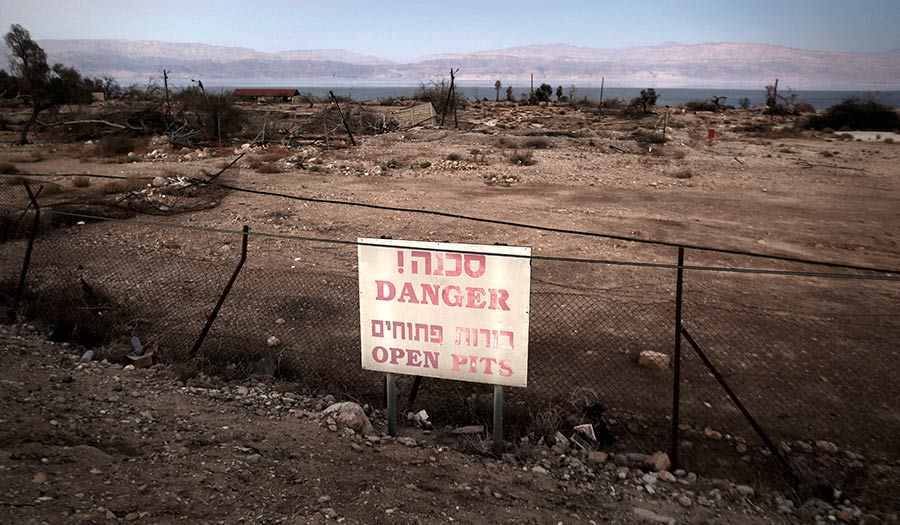 Menahem Kahana/AFP/Getty Images
A poster warns visitors of sinkholes in Israel’s abandoned tourist resort of Ein Gedi on the shore of the Dead Sea (July 11, 2016). Experts warned that the Dead Sea, the lowest and saltiest body of water in the world, is on course to dry out by 2050, with the emergence of sinkholes forcing the closure of roads and beaches, as well as damaging agriculture.

Three of Israel’s most historically significant bodies of water are under threat as the area’s drought enters its fifth year. Meteorologists in Israel predicted that the winter months will be drier than usual.

These dwindling bodies of water, important sites for historians, archeologists, and religious pilgrims, are also vital to the area’s ecology.

The Sea of Galilee

One percent the size of Lake Ontario, the Sea of Galilee is Israel’s main source of water. Yet it is not being replenished like it once was.

“The amount of water that’s flowed into the Kinneret [another name for the Sea of Galilee] in the past four years is the lowest ever,” Doron Markel, Israel Water Authority’s Kinneret director, told The Associated Press.

The Sea of Galilee’s water level is at its lowest point in a century—standing 703 feet below sea level. According to ecologists, this is low enough to reduce the lake’s rate of evaporation, which means the surrounding environment will become less humid and cause desertification.

The 155-mile-long Jordan River, which starts near Israel’s northern border, flows through the Sea of Galilee, and ends at the Dead Sea, is a trickle compared to its original form. About 95 percent of the river’s flow is diverted for agriculture.

“The lake has a storied place in history,” PBS reported, recounting the Dead Sea’s importance to local cultures through the millennia. “The biblical Sodom and Gomorrah reportedly overlooked its shores, while King David allegedly sought relaxation there in 1000 BCE. A few paces away, on the mountain top of Masada, Herod the Great built palaces, and in 73 CE, a thousand Jewish zealots chose death in their fortress over surrender to the Romans. Centuries later, Byzantine monks lived in monasteries overlooking its shores, and Crusaders built their castles.”

Yet, some experts say, the saltiest body of water on Earth may disappear by 2050 as the result of decreased flow from the Jordan River as well as industrial activity extracting salts and minerals.

Since the 1960s, dams and irrigation channels have diverted the Dead Sea’s waters for agricultural, industrial and drinking use. In just 50 years, the lake’s depth decreased by 112 feet, and its surface area reduced by 30 percent.

Thousands of sinkholes—some the size of soccer fields—have developed around the sea’s shrinking coast as a result of the disappearing water. These pits forced many once-popular beach resorts to be abandoned.

“In Ein Gedi natural reserve, on the Israeli shores of the Dead Sea, the government closed the last free beach a year ago, along with a gas station, a refreshment kiosk, and a newly-built camping area,” PBS continued. “Many miles are now enclosed by barbed wire fences to keep out curious passersby, while signs in Hebrew and English warn of the danger.

“‘We invested some $1.3 million into renovating the beach and its facilities,’ says Dov Litvinov, head of the Tamar Regional Council, whose jurisdiction includes Ein Gedi. ‘The day we were supposed to open it, we closed the nearby road, preventing access to the beach. A few months later we closed it altogether.’

“Now what is left of a charming sea resort perched on a steep saline coast is a ghost-like lunar landscape littered with craters, some of them up to 114 feet deep.”