This website requires the use of Javascript to function correctly. Performance and usage will suffer if it remains disabled.
How to Enable Javascript
Israel Defends U.S. Decision on Jerusalem Ahead of EU Meeting

Israel Defends U.S. Decision on Jerusalem Ahead of EU Meeting 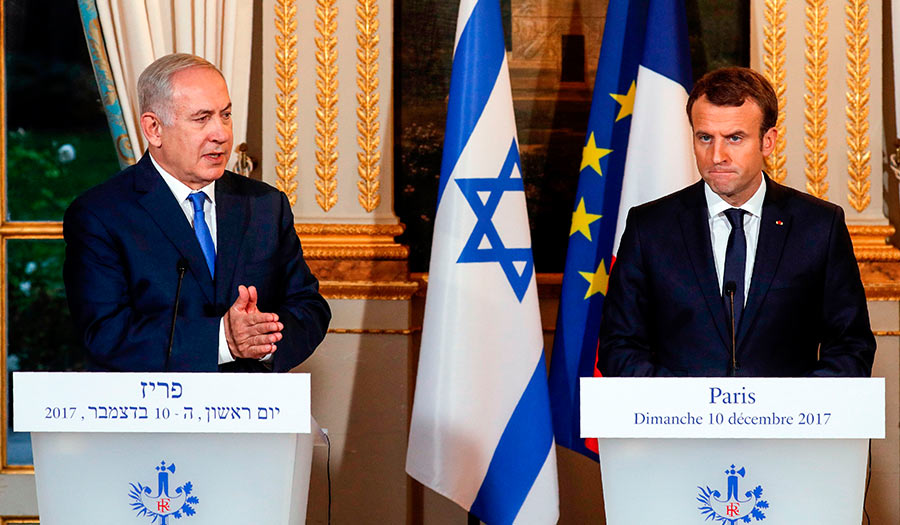 JERUSALEM (AP) – The leaders of France and Israel sparred verbally on December 10 over the U.S. decision to recognize Jerusalem as Israel’s capital, while new violence rippled across the region following the move by U.S. President Donald Trump.

In Jerusalem, a Palestinian stabbed an Israeli security guard, seriously wounding him in the first attack in the volatile city since President Trump’s pronouncement December 6. In Beirut, scores of Lebanese and Palestinian demonstrators clashed with security forces outside the heavily guarded U.S. Embassy, and Arab foreign ministers meeting in Cairo demanded that the United States rescind the decision.

The move upended decades of U.S. policy, and a longstanding international consensus, that the fate of Jerusalem be decided in negotiations. Israeli and Palestinian claims to the city’s eastern sector form the emotional core of their conflict, and Mr. Trump’s announcement was seen as siding with the Israelis and has drawn wide international criticism.

At a meeting in Paris with Israel’s visiting prime minister, French President Emmanuel Macron condemned recent violence against Israelis. But he also expressed “disapproval” of Mr. Trump’s decision, calling it “dangerous for peace.”

“It doesn’t seem to serve, in the short term, the cause of Israel’s security and the Israelis themselves,” Mr. Macron said.

He urged Israel to freeze its construction of settlements on occupied lands and called for other confidence-building measures toward the Palestinians.

Israeli Prime Minister Benjamin Netanyahu, who has called Mr. Trump’s decision “historic,” said Israel has maintained its capital in the city for 70 years and the Jewish connection to Jerusalem goes back 3,000 years.

“I think the sooner the Palestinians come to grips with this reality, the sooner we move toward peace,” he added.

The exchange between the two allies set the stage for what could be a tense meeting for Mr. Netanyahu with European Union foreign ministers in Brussels on December 11. The Jerusalem issue and the moribund peace process are expected to be high on the agenda.

EU leaders, including President Macron, have reiterated support for establishing an independent Palestinian state alongside Israel. President Trump has said he would support the idea if both sides endorse it—effectively giving Israel a veto over any peace proposal. Mr. Netanyahu’s government is dominated by opponents to Palestinian independence. Mr. Trump’s Middle East team, headed by his son-in-law Jared Kushner, has been working for months on a peace plan but has not yet released it.

Israel captured east Jerusalem from Jordan in the 1967 Middle East war and annexed the area to its capital in a move that was not internationally recognized. The Palestinians claim east Jerusalem as the capital of a future state, along with the West Bank and Gaza Strip.

East Jerusalem is home to Judaism’s most sacred site, as well as key holy places for Christians and Muslims. These conflicting claims have erupted into deadly bloodshed in the past.

The Palestinians staged three “days of rage” after Mr. Trump’s dramatic announcement, with clashes breaking out in flashpoints across the West Bank, east Jerusalem, and the Gaza Strip, and Gaza militants firing rockets into Israel. Four people in Gaza were killed. In the West Bank, there were dozens of injuries, but no deaths.

Palestinian youths also clashed in the West Bank city of Bethlehem, hurling stones at Israeli soldiers, who fired back with rubber bullets and tear gas.

In a resolution long on rhetoric but short on concrete actions, Arab foreign ministers demanded the recognition decision be rescinded and urged the U.N. Security Council to adopt a resolution condemning President Trump’s decision. They acknowledged that Washington would most likely veto it.

If the U.S. vetoes such a resolution, the Arabs would seek a similar resolution in the U.N. General Assembly, Palestinian Foreign Minister Riyad Malki told a news conference in Cairo.

With few options for the Palestinians, and the Arab world preoccupied by other crises, Arab willingness to press the issue may be limited. In Paris, Mr. Netanyahu talked about his quiet but improving relations with Arab countries that look to Israel as an ally against Iran.

“There is in this a blessing, because this could help pave the way to an ultimate peace between us and our Palestinian neighbors and between us and the rest of the Arab world,” he said.

“For those who want to say this is a bad idea, I’ll tell you: Ask us five or 10 years from now if you still think it’s a bad idea. Because I really do think this is going to move the ball in the peace process,” she told CNN’s “State of the Union.”