This website requires the use of Javascript to function correctly. Performance and usage will suffer if it remains disabled.
How to Enable Javascript
Red Cross: Nearly 1 Million Cholera Cases in Yemen by Year’s End 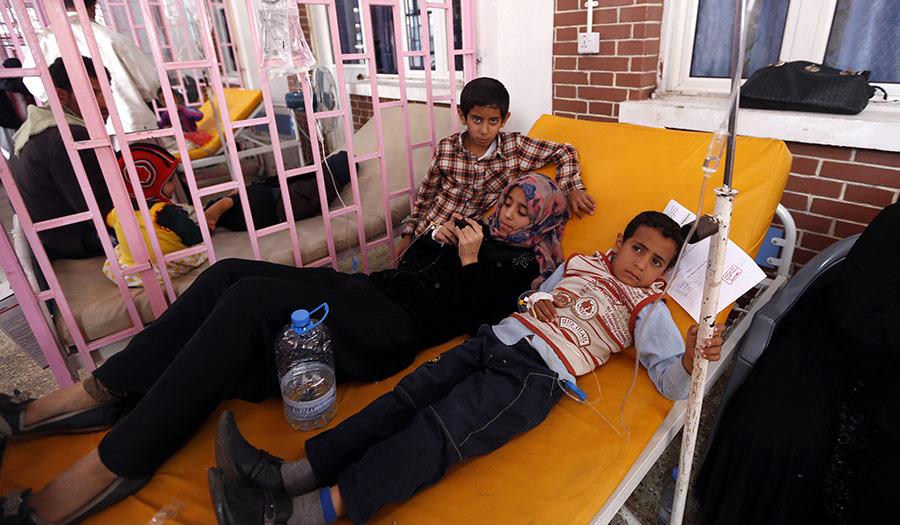 Mohammed Huwais/AFP/Getty Images
Yemeni children suspected of being infected with cholera receive treatment at a hospital in the capital Sanaa (Aug. 12, 2017).

The humanitarian situation in Yemen—including a massive cholera outbreak—continues to worsen because of prolonged fighting between Iran-backed Houthi rebels and a Saudi-led coalition supporting Yemen’s government, as well as stepped up attacks by al-Qaida and the Islamic State group in the country.

Alexandre Faite, head of the Red Cross delegation in Yemen, said that there are currently 750,000 suspected cases of cholera, with 2,119 confirmed deaths this year. The Red Cross expects at least 900,000 to be infected with cholera by the end of this year, according to a report released September 29.

“The situation has really evolved in a very dramatic way and I think that it’s nothing short of a catastrophe,” Mr. Faite said during a news briefing in Geneva.

The aid group expressed concern of a shortage of supplies for treating ill Yemenis because most of the country’s shipping ports and airports are either damaged or are under threat of attack from the warring factions. The international airport in the capital Sanaa has remained closed to commercial flights since March 2015, when the conflict began. Basic necessities such as food and medical supplies, such as insulin, can only arrive on occasional cargo planes to Sanaa and land convoys from Jordan and Oman.

Mr. Faite said that Yemen’s “health sector is really on its knees in Yemen” as a result of the blockades, adding that “the health staff is on its knees as well because they are not paid.”

He continued: “I don’t think political settlement is coming soon and I’m very worried that the extension of the conflict would lead to more problems.”

Since Yemen’s civil war began, more than 16,000 civilians have been killed as a result of the fighting, according to a March 2017 UN report.