This website requires the use of Javascript to function correctly. Performance and usage will suffer if it remains disabled.
How to Enable Javascript
U.S. Opens First-ever Permanent Military Base in Israel 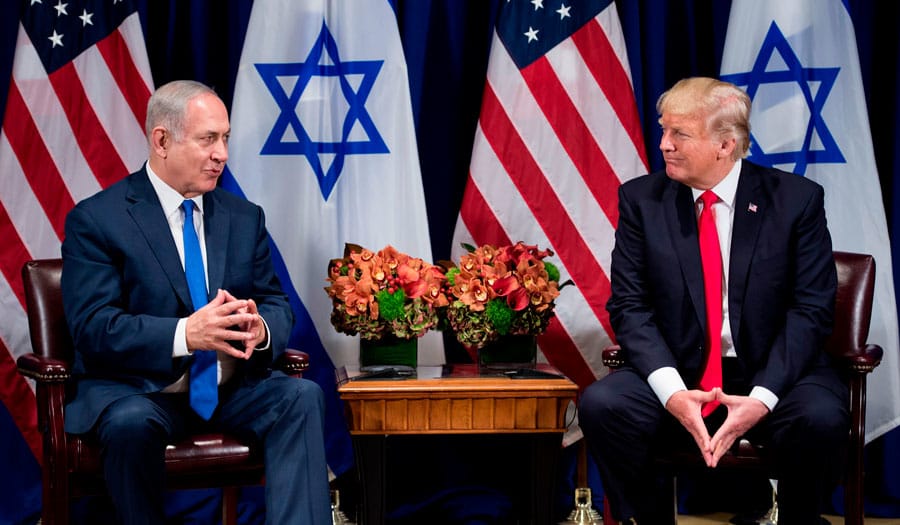 Brendan Smialowski/AFP/Getty Images
Allies: U.S. President Donald Trump listens while Israel’s Prime Minister Benjamin Netanyahu makes a statement for the press before a meeting at the Palace Hotel during the 72nd session of the United Nations General Assembly (Sept. 18, 2017).

BISLACH AIR BASE, Israel – Israel and the United States inaugurated the first American military base on Israeli soil on September 18, which will serve dozens of soldiers operating a missile defense system.

The move comes amid Israeli concerns about Iran’s development of long-range missiles. Together with the U.S., Israel has developed a multilayered system of defenses against everything from long-range guided missile attacks from Iran to crude rockets fired from Lebanon and the Gaza Strip.

The base’s opening is largely symbolic and is not expected to bring operational changes. But the Israeli military says that, along with other measures, it sends a message of readiness to Israel’s enemies.

The base is located within an existing Israeli air force base and will operate under Israeli military directives.

Israeli and U.S. military officials cut a ribbon at the base on September 18, where American and Israeli flags flew side by side and soldiers from both countries commingled.

Israel’s multi-tier missile defense system includes the Arrow, designed to intercept long-range ballistic missiles in the stratosphere with an eye on Iran, and the Iron Dome, which defends against short-range rockets from the Gaza Strip. Another called David’s Sling is designed to counter the type of medium-range missiles possessed by Iranian-backed Hezbollah militants.

Israel considers Iran to be its greatest threat, citing the country’s nuclear ambitions, its development of long-term missiles, hostile anti-Israel rhetoric and support for anti-Israel militant groups. Israel has grown increasingly troubled by Iran’s involvement in the civil war in neighboring Syria, where its troops are supporting President Bashar Assad.

In addition, Israel is concerned that Iran and its proxy Hezbollah will establish a long-term presence in Syria near the Israeli border.

Israel and the United States have shared a remarkable bond since the founding of the Jewish state in 1948. Despite hiccups and setbacks, it has endured.

The military base announcement comes just days after a meeting between the American president and Israeli prime minister, which was described in a White House statement: “President Donald J. Trump and Prime Minister Benjamin Netanyahu of Israel met today in New York to reaffirm the unbreakable bond between the United States and Israel.

“The President underscored the unwavering commitment of the United States to Israel’s security. The two sides discussed their continued cooperation across a range of issues and stressed their goals of countering Iran’s malign influence in the region and resolving the Syria crisis in a manner consistent with American and Israeli security interests.

“They also discussed their continuing efforts to achieve an enduring Israeli-Palestinian peace agreement, the optimism in the region about peace, and expanding economic opportunities to improve conditions for peace. The President assured the Prime Minister that under his and Ambassador Haley’s leadership, the United States will oppose unfair treatment of Israel at the United Nations.”

This is a rare show of support for the Mideast nation, which often faces broad opposition among UN member nations. But the U.S. is not entirely alone in its position.

A day after the White House statement, British Prime Minister Theresa May addressed a group of Jewish leaders at 10 Downing Street. Looking ahead to the 100-year anniversary of the Balfour declaration, which paved the way to the founding of Israel, she stated, “As we look to the [Jewish] New Year, we look forward to the Centenary of the Balfour declaration in November. Born of that letter, the pen of Balfour, and of the efforts of so many people, is a remarkable country. Of course, there are great challenges in the region—and we will do everything we can to support efforts towards building a two-state solution—and the lasting peace that we all want to see.

“But as Prime Minister, I am proud to say that I support Israel.

“And it is absolutely right that we should mark the vital role that Britain played a century ago in helping to create a homeland for the Jewish people.”

Why the lasting bond among these three powers? The answer lies much deeper than modern geopolitics, or even the dynamics of the last century. To learn much more, read America and Britain in Prophecy.