This website requires the use of Javascript to function correctly. Performance and usage will suffer if it remains disabled.
How to Enable Javascript
Can a “Convergence of Interests” Unite the Middle East?

Can a “Convergence of Interests” Unite the Middle East? 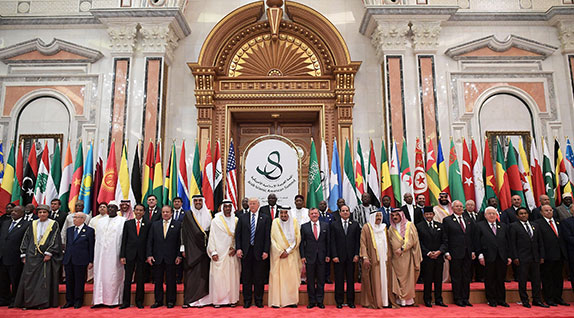 Relations among countries in the Middle East appear to be shifting as a result of the shared threat of terrorism and a change in strategic policies across the region.

The United States seems to be capitalizing on this trend. Political analysts see the White House using common concerns to unite a divided Mideast—and potentially employing this strategy to push forward the Israeli-Palestinian peace process.

“The logic behind the administration’s emerging strategy is straightforward enough: Israel and several Arab regimes now face common threats from Iran and radical Islamic terrorism,” a Foreign Policy editorial noted. “This convergence of interests is increasingly driving the former adversaries together. In recent years, contacts, consultations, and even nascent forms of economic and security cooperation have grown significantly—albeit mostly out of public view. The time could at long last be ripe—or so the thinking goes—to have Arab countries step out of the shadows and take center stage in helping break the Israeli-Palestinian deadlock.

“How, exactly? Again, in theory at least, the prospect of public meetings and improved relations with the broader Arab world would incentivize security-minded Israelis to be more generous in granting concessions to longstanding Palestinian demands—on such core issues as territory, settlements, and Jerusalem—than would otherwise be the case. At the same time, Arab pressure would provide Palestinian leaders with the political cover they need to justify making painful compromises with the ‘Zionist entity’ that have heretofore been deemed unacceptable.

“Why would notoriously cautious regimes like the one in Saudi Arabia, that have historically shunned a more activist role, now be willing to take on the added responsibilities and risks of playing peacemaker with Israel? The answer, proponents argue, lies in the strong interest the Arab states have in currying favor with a new U.S. president and, more importantly, securing his support for a much tougher American posture toward the rising threat of a hegemonic Iran in particular.”

Iran, which has a democratically elected government but is overseen by Shia Muslim clerics, has always been at odds with the Sunni-led Saudi administration. Even though both sects look to the Koran and practice strict forms of Islam, their ideologies clash as do their political stances.

The two nations have been particularly vocal in their dislike of one another’s policies and have each fallen on opposite sides of the political spectrum.

While the previous U.S. administration looked to Iran as a potential partner and took strides to lift sanctions, that focus has shifted back to longtime ally Saudi Arabia and other Gulf states such as Bahrain, the United Arab Emirates, and Kuwait.

To ensure terror and unrest do not spread to their own nations, governments in the Middle East may increasingly work together—even if they are longtime rivals.