This website requires the use of Javascript to function correctly. Performance and usage will suffer if it remains disabled.
How to Enable Javascript
Mexico’s Murder Rate Hits Highest Level Since 2011 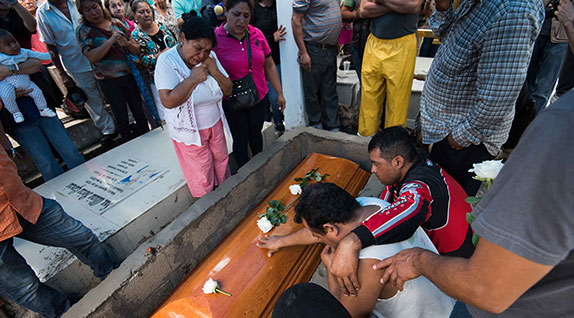 Karlo Reyes/AFP/Getty Images
Heightened violence: Mourners gather during a funeral in Tierra Blanca, Mexico, for a victim who died after being shot in front of his home (July 22, 2016).

Mexico’s homicide rate struck a five-year high in the first half of 2016, with the daily average reaching 57 murders. There were 2,073 in July alone.

The surge in violence—the largest since the nation authorized a militarized crackdown on drug cartels in 2011—has been attributed to a rise in the number of smaller crime organizations.

Mexican security analyst Alejandro Hope stated that the downfall of Mexico’s large cartels, which have been broken up by law enforcement and infighting, “has created a vacuum that has been occupied by a large array of smaller, more local, more predatory gangs.”

Authorities are spreading their resources thin to keep up. Business Insider reported that “the heavily fractured and opaque nature of the country’s criminal landscape make analyzing and combatting that activity hard.

“The fact that violence has gone up in so many parts of Mexico—coupled with missteps and bad practices by authorities—makes it harder for the government to respond effectively.”