This website requires the use of Javascript to function correctly. Performance and usage will suffer if it remains disabled.
How to Enable Javascript
Pope’s First Middle East Trip: More than an Interfaith Visit? 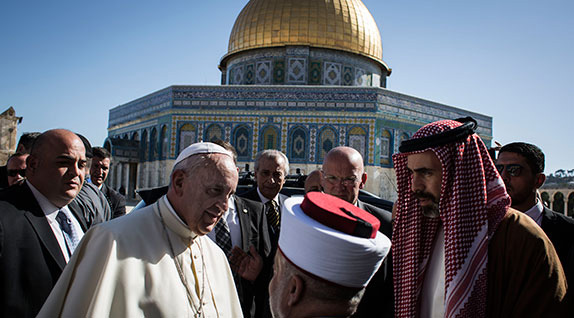 As Pope Francis’ airplane took off from Israel following a historic three-day whirlwind Middle East tour, more questions than answers surfaced about the nature of his visit to the conflict-riddled region.

From the start, the trip made waves. News media featured stories that he would travel with two friends from Argentina—a rabbi and an Islamic leader—and not in his armored vehicle. It was also announced that a Maronite Catholic cardinal from Lebanon, a country officially at war with Israel, would join him.

On Saturday, May 24, the trip commenced with a daylong visit to Jordan where he met with the royal family, various authorities, and refugees. The following day, he traveled directly to Bethlehem and the West Bank area—instead of through Israel as is typically done—to meet with Mahmoud Abbas, the leader of the Palestinian territories. There he lent his support to its statehood bid by referring to it as the “state of Palestine” and Mr. Abbas’ Bethlehem office as the “presidential palace,” according to The Associated Press.

“Standing alongside Abbas at a welcome ceremony, Francis declared: ‘The time has come to put an end to this situation, which has become increasingly unacceptable.’

“He said both sides needed to make sacrifices to create two states, with internationally recognized borders, based on mutual security and rights for everyone. He urged both sides to refrain from any actions that would derail peace.”

At the end of the event—and amid the United States continued inability to broker peace between the two sides—“The pope made one of his boldest political gestures…when he unexpectedly intervened in flailing diplomatic efforts to end the Israeli-Palestinian conflict, inviting the presidents from the two sides [Mr. Abbas and Shimon Peres] to his Vatican residence to pray for peace,” Reuters reported.

“The invitation—and the acceptances—were unexpected given Francis’ insistence that his three-day visit was a ‘strictly religious’ pilgrimage to commemorate a Catholic-Orthodox anniversary,” The Associated Press stated. “[Papal spokesman Federico] Lombardi said the pope had discussed the idea with his advisers in the run-up to the visit as a way to give a concrete push to peace efforts.

While Mr. Peres is Israel’s president, he does not have the same decision-making abilities as Prime Minister Benjamin Netanyahu, who was not invited and has been publicly against Mr. Abbas’ reconciliation with Hamas, a known terrorist organization.

Before leaving the area, the pope then shocked the world with an impromptu stop at a graffiti-covered security barrier separating Jerusalem and Bethlehem, which had the words “Free Palestine” scrawled across it. A photo of him praying against the wall with his head pressed to it immediately went viral.

The visit ended with a trip to Israel, where he met with Ecumenical Patriarch of Constantinople Bartholomew I to commemorate the 50th anniversary of a similar reunion between Pope Paul VI and Patriarch Athenagoras during which the two leaders made strides to repair the centuries-old Catholic-Orthodox rift for the first time since the churches were divided.

“The encounter, punctuated by haunting Greek and Latin chants, was full of symbolic meaning: The two men, both in their mid-70s, helped one another down the stone steps leading into the church, grasping one another’s forearms. And after Bartholomew delivered his remarks, Francis bent down and kissed his hand in remarkable show of papal respect for a patriarch when some 500 years ago a patriarch was forced to kiss the feet of the pope” (ibid.).

On the last day of his visit, Monday, May 26, Francis walked the Temple Mount and prayed at the Western Wall in Jerusalem. Accompanied by Prime Minister Netanyahu, he became the first Vatican leader to lay a wreath at the tomb of Theodor Hertzl, the founder of modern Zionism. Upon a recommendation by the premier, the pope also made an unexpected stop at a national memorial for victims of Palestinian terror attacks. And at Yad Vashem, he kissed the hands of Holocaust survivors.

“I explained to the pope that building the security fence prevented many more victims that Palestinian terror—which continues today—planned to harm,” The New York Times reported Mr. Netanyahu as stating.

He later added: “I long for the day in which Pope Francis’ call to recognize the state of Israel, the right of Jews to a state of their own, to live in security and peace, will be accepted by our neighbors” (ibid.).

In addition, during the visit, the head of the Catholic church met with President Peres, who also supports a two-state solution.

Throughout the trip, it was clear the pope strove to be as diplomatic as possible, given the opposing viewpoints, The New York Times reported.

“In Bethlehem, [Francis] singled out the plight of prisoners, a touchstone for Palestinians who consider even those who killed Israelis as heroic freedom fighters. In Israel, he was careful to say specifically that six million Jews had been killed and to use the Hebrew term for the Holocaust, Shoah—things that his predecessor, Benedict, had been criticized for not doing during his 2009 pilgrimage.”

While the pope’s office insists the trip was purely for interfaith purposes, his actions seemed to demonstrate otherwise.

Before his tour, The Globe and Mail reported: “This Pope’s visit to the Holy Land ‘is unlike any of the three that have gone before,’ says Michael Higgins, a Vatican expert at Sacred Heart University in Connecticut. Time spent with Israelis is very limited on this trip and there will be no pastoral visit to the large Christian Israeli community in the Galilee that was the hallmark of previous papal pilgrimages.

“Even if it means giving short shrift to Israel, said Mr. Higgins, ‘Francis has other priorities he is determined to establish.’”

The media outlet further stated, “The nature of Francis’s visit and the lengthy meetings with Bartholomew underscore the international importance of Jerusalem, says Archbishop Fouad Twal, Latin Patriarch of Jerusalem. A man held in high regard at the Vatican, the Patriarch recently called for the holy city to be recognized as ‘the capital of humanity’ with special international status.

“Reading between the lines of the papal itinerary, Mr. Higgins believes the Pope is making a statement about Jerusalem, about its importance in building bridges between peoples, and about the Vatican’s interest being more than simply access to holy sites.”

Vatican spokesman Mr. Lombardi refuted the claims the religious leader had any other intentions than trying to build interfaith bridges.

“Francis had a strictly religious mission and ‘has no political agenda or proposals to make,’ but hoped the meeting could build trust,” Reuters reported.

“We hope it will encourage the revival of the process of peace, to give new courage, new inspiration to the people engaged in this process,” Mr. Lombardi stated.

The meeting between the pope, Mr. Peres, and Mr. Abbas is scheduled to take place on June 6.