This website requires the use of Javascript to function correctly. Performance and usage will suffer if it remains disabled.
How to Enable Javascript
Early Season Tornadoes Kill 38 in United States 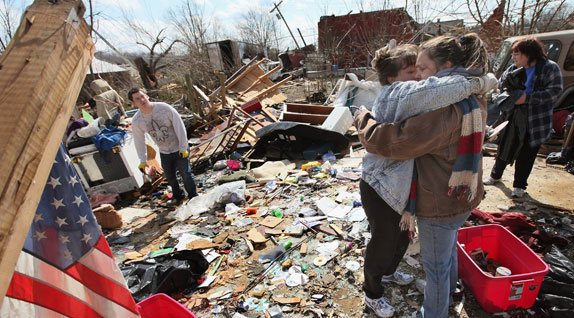 Scott Olson/Getty Images
Devastated: A woman embraces her sister whose home was destroyed by a tornado in Henryville, Indiana (March 3, 2012).

A swath of storms swept across Alabama, Georgia, Indiana, Kentucky and Ohio, killing almost 40 people and decimating entire towns. The swarm followed a series of tornadoes a few days earlier, which caused the death of at least 13 people in Kansas, Tennessee, Illinois and Missouri.

Approximately 34 million people across the United States were at risk from the severe weather, which carved a path of destruction from the Great Lakes to the Gulf Coast. The powerful storm system ripped homes off their foundations, downed power lines, and even caused an empty school bus to fly through a house.

“The whole downtown is gone,” Kentucky Governor Steve Beshear said of the hard-hit town of West Liberty during a telephone interview with The New York Times. “It looks like a bomb was dropped right in the middle of the town. Every building is destroyed or on the verge of collapsing.”

Several areas have declared states of emergency, and the National Guard has been activated to assist with search and rescue efforts and cleaning up debris.

The estimated 94 tornadoes that occurred could make it the largest March outbreak ever, topping the three-day 2006 outbreak, which produced 74 tornadoes.

“This week’s violent storms raised fears that 2012 will be another bad year for tornadoes after 550 deaths in the United States were blamed on twisters last year, the deadliest year in nearly a century, according to the Weather Service,” Telegraph reported. 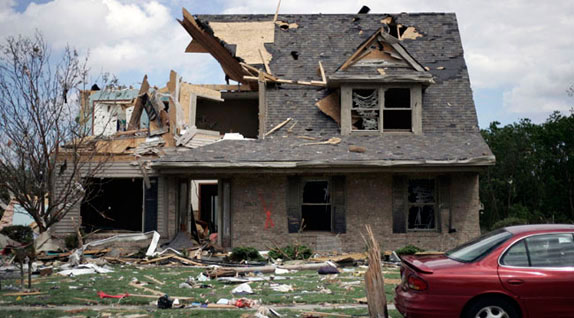 What’s Wrong with the Weather?
The extremes in weather worldwide have prompted many to question if they are mere happenstance—or if there is something else behind them.