This website requires the use of Javascript to function correctly. Performance and usage will suffer if it remains disabled.
How to Enable Javascript
U.S. Troops Pull Out of Iraq

U.S. Troops Pull Out of Iraq 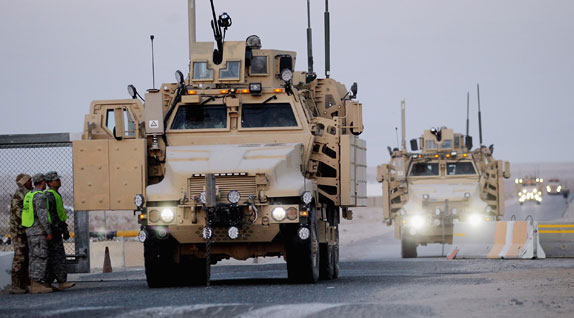 “The last U.S. soldiers rolled out of Iraq across the border to neighboring Kuwait at daybreak…whooping, fist bumping and hugging each other in a burst of joy and relief,” The Associated Press reported. “Their convoy’s exit marked the end of a bitterly divisive war that raged for nearly nine years and left Iraq shattered, with troubling questions lingering over whether the Arab nation will remain a steadfast U.S. ally.”

In his weekly White House address, U.S. President Barack Obama said: “This week marked an historic moment in the life of our country and our military. For nearly nine years, our nation has been at war in Iraq. More than 1.5 million Americans have served there with honor, skill, and bravery. Tens of thousands have been wounded. Military families have sacrificed greatly—none more so than the families of those nearly 4,500 Americans who made the ultimate sacrifice.”

Iraq, though, appears to have been left in a fragile condition. On the same week of the American retreat, a series of at least 17 deadly bombings and resulting protests reminded the nation of its unresolved internal tensions.

“The crisis could scuttle a delicate power-sharing agreement that splits posts among Shi’ite, Sunni and Kurdish leaders…” Reuters stated. The media outlet later added, “Many Iraqis fear a return to sectarian violence without a U.S. military buffer.”