This website requires the use of Javascript to function correctly. Performance and usage will suffer if it remains disabled.
How to Enable Javascript
Massive Wildfires Overtake Texas 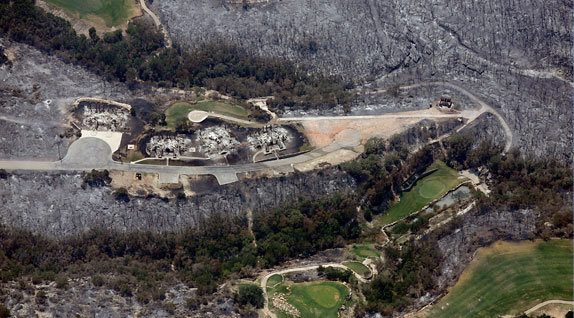 Ian McVea/Fort Worth Star-Telegram/MCT
Wildfire aftermath: A golf course is surrounded by burned-out homes and scorched grass and trees in this aerial photograph taken near Possum Kingdom Lake, Texas (Sept. 1, 2011).

Out-of-control wildfires in Texas burned at least 1,000 homes within one week—more than 800 in 48 hours—forcing more than 5,000 people to evacuate.

Texas governor Rick Perry told reporters that some 21,000 wildfires across 3.6 million acres have burned since the start of the fire season in December 2010, which is a “landmass [that] is equal to approximately the size of the state of Connecticut.”

The extended drought that has afflicted the nation’s second-largest state since the turn of the year escalated when ongoing wildfires met with high-speed winds from Tropical Storm Lee. The storm dumped more than 20 inches of rain in neighboring Louisiana and Mississippi, yet not a drop of much-needed rain fell in Texas.

“Many Texans prayed Tropical [Storm] Lee would bring rain, but instead only gusty winds made Texas’ most active fire season ever that much worse,” ABC News reported. “The state is experiencing its worst drought since the 1950s. In the past nine months, Texas has experienced six of the ten largest wildfires in its history and since November 3,523 homes and structures have been lost to the flames, according to the Texas Forest Service.”

Weather officials say that the prospect of the area receiving rain in the near future is bleak.