This website requires the use of Javascript to function correctly. Performance and usage will suffer if it remains disabled.
How to Enable Javascript
London Burns 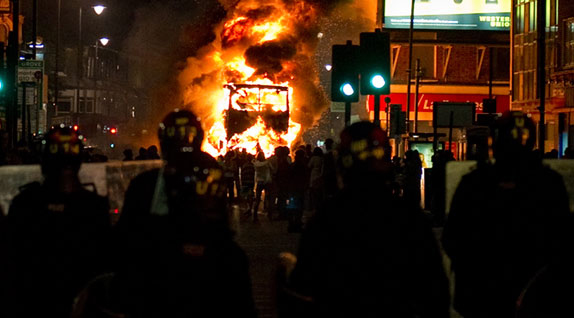 LEON NEAL/AFP/Getty Images
Ablaze: A double-decker bus burns as riot police try to contain a large group of people on a main road in Tottenham, a district north of London (August 6, 2011).

For several days, young looters have ravaged British cities in protests that ensued after a man from London’s northern Tottenham district was killed in a police shootout. Rebels smashed windows with baseball bats, set buildings and vehicles ablaze, burglarized stores and launched bottles filled with gasoline at tens of thousands of police officers in full riot gear, some patrolling on horseback or armored vehicles. The London-born mutinies rapidly spread to at least three other cities, where several people—including police—have been injured, and hundreds of residents have been arrested.

“Two police cars and a double-decker bus were set alight, stores were looted and several buildings along Tottenham’s main street—five miles (eight kilometers) from the site of the 2012 Olympics—were reduced to smoldering shells,” The Associated Press reported.

The civil lawlessness is reminiscent of the Broadwater Farms race riots that occurred in the same area in 1985. An onsite BBC correspondent reported: “I saw 100 or so young men with ski masks and hoods pulled down. They seemed to be very well-organised, communicating with each other on radio. The police were in force but they did not seem to know what to do. It’s a really tense atmosphere here.”

Akin to Middle East uprisings, social networking has been widely used to incite mobs. A Daily Telegraph article stated that in Birmingham, a city northwest of London, “Police were prepared for trouble after a campaign on Facebook, BlackBerry Messenger and Twitter warned of violence and encouraged others to get involved.”

In a Guardian report, however, one Egyptian man “tweeted in frustration at those likening the British riots to the Arab Spring. ‘Egyptians and Tunisians took revenge…by peacefully toppling their murdering regimes, not stealing DVD players.’”

British Prime Minister David Cameron has denounced the violence: “This is criminality pure and simple and it needs to be confronted,” he stated on MSNBC. “Justice will be done and these people will see the consequences of their actions. If you are old enough to commit these crimes, you are old enough to face the punishment.”

While the riots occurred in reaction to what was considered to be a race-driven shooting, analysts say the real motivation lies in Britain’s economic cutbacks.

“In real terms the actual spending reduction program is the most painful if it all came to fruition since the 1940s in terms of its actual squeeze on the levels of public spending,” a London’s Economist Intelligence Unit expert told Voice of America. “It’s something that the U.K. has not endured for many, many years.”

When a nation’s citizens come to view assistance programs as rights to be taken for granted, what will result from prolonged austerity measures? For a more in depth understanding of the riots, and to learn about the United Kingdom’s future, read Britain in Flames and the free book America and Britain in Prophecy.