This website requires the use of Javascript to function correctly. Performance and usage will suffer if it remains disabled.
How to Enable Javascript
Britain in Flames

After riots erupted in England, leaders called the state of British society into question. 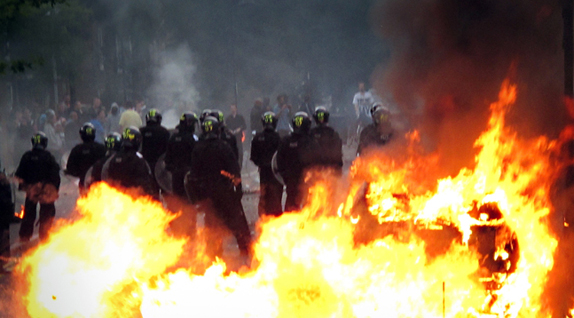 For several days, looters ravaged British cities, smashing windows with baseball bats, setting buildings and vehicles ablaze, burglarizing stores and launching bottles filled with gasoline at tens of thousands of police officers in full riot gear, some patrolling on horseback or in armored vehicles. The London-born violence rapidly spread to at least three other cities, where several people—including police—were killed or injured, and hundreds of residents were arrested.

“Two police cars and a double-decker bus were set alight, stores were looted and several buildings along Tottenham’s main street—five miles (eight kilometers) from the site of the 2012 Olympics—were reduced to smoldering shells,” The Associated Press reported.

An onsite BBC correspondent stated: “I saw 100 or so young men with ski masks and hoods pulled down. They seemed to be very well-organised, communicating with each other on radio. The police were in force but they did not seem to know what to do.”

During the riots, youth communicated with each other via cellphones and Internet-enabled handheld devices. Social networking was widely used to incite mobs. A Daily Telegraph article stated that in Birmingham, a city northwest of London, “Police were prepared for trouble after a campaign on Facebook, BlackBerry Messenger and Twitter warned of violence and encouraged others to get involved.”

Dan Istitene/Getty Images
Intervention: A riot police officer attempts to break down the door of a house next to a burning car in London, England (Aug. 8, 2011).

The riots began after what was construed as a race-driven police shooting in London’s northern Tottenham district. But those who stole items from shops constituted a multitude of ethnic backgrounds and classes—from rowdy teenagers to adults who seized the opportunity to simply take something for free.

“First the streets contained people of all backgrounds sprinting off with bicycles looted from Evans Cycles,” Guardian reported. “Three Asian men in their 40s, guarding a newsagent, discussed whether they should also take advantage of the apparent suspension of law…Others were not so reticent; a white woman and a man emerged carrying a bike each. A young black teenager, aged about 14, came out smiling, carrying another bike, only for it be snatched from him by an older man.” 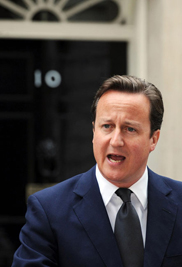 “In real terms the actual spending reduction program is the most painful if it all came to fruition since the 1940s in terms of its actual squeeze on the levels of public spending,” London’s Economist Intelligence Unit expert told Voice of America. “It’s something that the U.K. has not endured for many, many years.”

British Prime Minister David Cameron had another view, denouncing the violence as evidence of the country’s “twisted moral code,” “indifference to right and wrong,” and “complete absence of self restraint” during a speech posted on the British government’s website.

“In this risk-free ground of moral neutrality there are no bad choices, just different lifestyles,” he said. “People aren’t the architects of their own problems, they are victims of circumstance. ‘Live and let live’ becomes ‘do what you please.’

“Well actually, what last week has shown is that this moral neutrality, this relativism—it’s not going to cut it any more. One of the biggest lessons of these riots is that we’ve got to talk honestly about behaviour and then act—because bad behaviour has literally arrived on people’s doorsteps.”

The British prime minister said that the United Kingdom must have the “determination to confront the slow-motion moral collapse that has taken place in parts of our country these past few generations” and face some “of the worst aspects of human nature” that have become “tolerated, indulged—sometimes even incentivized—by a state and its agencies that in parts have become literally de-moralised.”

In his book The Bible’s Greatest Prophecies Unlocked! – A Voice Cries Out, Real Truth Editor-in-Chief David C. Pack writes about the worldwide breakdown of character occurring today—and where the financial and moral collapse is headed.

Anthony Devlin/PA Photos/Abaca Press/MCT
Vandalized: Shopkeepers begin to clean up following a night of civil unrest on the streets of London (Aug. 9, 2011).

He states, “Obsession with material goods is fueling—in fact, supercharging—the mounting debt crisis. People now routinely spend more than they make. They want the best clothes, newest gadgets and fanciest cars. ‘Keeping up with the Joneses’ and ‘Everyone else is doing it!’ drives millions of consumers.

“Jesus warned, ‘Beware of covetousness: for a man’s life consists not in the abundance of the things which he possesses’ (Luke 12:15).

“Do any still believe this?

“Governments, financial institutions and millions of citizens are all sliding toward bankruptcy.

“The present generation is very different from those of the past. Most now live solely for pleasure, ease, comfort, gain and entertainment. Thoughts of personal responsibility and character-building have almost disappeared. Tens of millions today reflect—‘I want’—‘I want a lot’—and ‘I want it now!’”

Unknown to most, the Bible foretold all that is happening today: “This know also, that in the last days perilous [dangerous] times shall come. For men shall be lovers of their own selves, covetous...unthankful...lovers of pleasures more than lovers of God” (II Tim. 3:1-2, 4).

Mr. Pack continues, “Make no mistake. As trends and conditions degenerate, violence will ensue—and in a big way. Uprisings, riots and tumults will increase in number and severity—so will violent crime, as the increasing number of desperate people take desperate action in an attempt to save themselves—at all costs. With this, the confusion of people asking, ‘What do we do?’—‘Where do we go?’—‘Who do we listen to?’—will grow beyond anything ever before seen.

“The cacophony of fearful uncertainty will be deafening!”

To learn how you can escape—and be protected—read America and Britain in Prophecy.