This website requires the use of Javascript to function correctly. Performance and usage will suffer if it remains disabled.
How to Enable Javascript
More United States Tornadoes—117 Dead 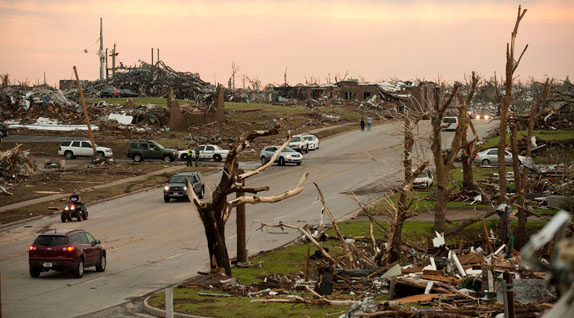 Julie Denesha/Getty Images
Demolished: Residents drive through the streets of Joplin, Missouri, following a tornado that killed at least 116 people (May 23, 2011).

Wild weather systems tore through the United States from Minnesota to Texas, producing devastating tornadoes that killed at least 117 people.

The destructive weather, which spawned nearly 50 tornadoes on May 22, came only three weeks after the largest tornado outbreak in U.S. history that killed more than 300 victims.

Joplin, Missouri, was hardest hit. The American Red Cross estimates that more than 75 percent of the town of 50,000 people was decimated.

“The deadliest U.S. tornado in nearly six decades ripped through the southwest Missouri city of Joplin, leveling schools, businesses and churches and killing at least 116 people,” The Wall Street Journal reported. “Rescue workers Monday searched for survivors of a twister more than half a mile wide that roared through here Sunday evening at wind speeds above 190 mph.”

At least 500 were injured in Joplin alone and 1,500 have been reported missing.

“You see pictures of World War II, the devastation and all that with the bombing,” a Joplin High School principal told USA Today. “That’s really what it looked like.”

More than 20 cars and tractors were strewn across the town’s highway, and X-ray films from a wrecked hospital were retrieved as far as 70 miles away, AccuWeather reported.

While Joplin was the most-affected town, the storms were “part of a larger system that triggered severe weather that killed one person in Kansas on Saturday night and caused damage from Minnesota to Texas on Sunday. At least one person was killed and 29 injured in storms that hit Minneapolis, Minn. Meanwhile, La Crosse, Wis., was also hit hard as winds tore roofs off homes and trapped residents inside” (ibid.).

The death toll will likely rise as rescue workers continue to search through wreckage.

To learn why severe weather is increasing, read “What’s Wrong with the Weather?”

U.S. Tornado Deaths Exceed 300
The National Weather Service recorded that at least 178 tornadoes ravaged the Midwest and Southeast United States in two days (April 27-28), making it the largest number recorded during a single tornado outbreak in United States history. The storms fragmented homes, buildings and facilities, knocked down thousands of trees, destroyed power and telephone lines, and obliterated businesses as they swept the region.