This website requires the use of Javascript to function correctly. Performance and usage will suffer if it remains disabled.
How to Enable Javascript
Riots Spread Across Arab World 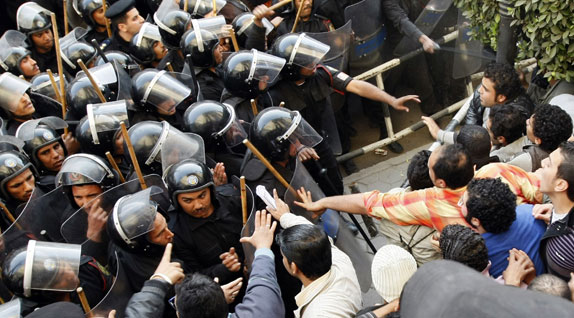 Tens of thousands of anti-government dissidents flooded the streets of various Middle Eastern countries, causing dozens of deaths, hundreds of injuries, and more than 1,000 arrests.

Egypt has been especially embroiled in demonstrations against President Hosni Mubarak’s almost 30-year rule, with some protestors even declaring a number of organized “days of rage.”

The most recent protest in the African nation escalated to unprecedented levels, prompting decisive measures including flight cancellations, a curfew, use of military tanks to patrol the streets, and an Internet stoppage.

“Overnight in Egypt, the government shut down the vast majority of Egypt’s Internet service, only allowing a network used by the stock exchange and most banks to stay live,” Christian Science Monitor reported.

Former head of the International Atomic Energy Agency and Nobel Peace Prize winner Mohamed ElBaradei, who openly supports the protests and is a favorite in the coming presidential election, has been placed under house arrest, according to The Associated Press.

Many protesters have relied on Internet social network sites, such as Facebook and Twitter, to organize the riots.

“E-mails were sent out…telling protesters to march but without harsh messages on their signs. They were called on to hold flowers, ask the police to join them, and take over government buildings,” Haaretz reported.

The unrest sweeping Arab nations began in Tunisia, after a demonstrator lit himself on fire due to rampant unemployment in the country.

“Since Tunisia’s anti-government protests, at least five Egyptians have attempted suicide by self-immolation, imitating the young Tunisian whose burning death in December first galvanized protesters there,” Voice of America reported.

In Lebanon, the selection of Hezbollah-backed Prime Minister Najib Miqati sparked another “day of rage.”

Additionally, The New York Times reported that in Yemen “scenes broadcast across the Arab world were reminiscent of demonstrations in Egypt this week and the month of protests that brought down the government in Tunisia.”

Authorities are concerned the unrest could lead to food riots similar to those that occurred in 2007 and 2008.

To understand the reason behind the bloodshed and brutality occurring today, read “Making Sense of an Earth Filled with Violence.”