This website requires the use of Javascript to function correctly. Performance and usage will suffer if it remains disabled.
How to Enable Javascript
Surprise Discovery: Gigantic Galaxy “Bubbles” 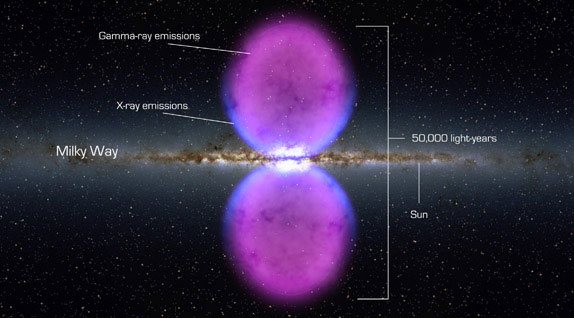 The existence of two recently discovered massive formations at the center of the Milky Way Galaxy, which were created by an energy discharge equivalent to 100,000 exploding stars, have surprised astronomers and prompted intrigue about their origins.

The dumbbell-shaped structures named “Fermi bubbles” are composed of gamma radiation, the highest-energy form of light, and have a 50,000 light-year diameter—half the span of the Milky Way—stretching north and south of the galaxy’s center.

Scientists from Harvard-Smithsonian Center for Astrophysics first spotted the bubbles using data from NASA’s Fermi Gamma-ray Space Telescope. To make the discovery, researchers had to peer through a “fog” of radiation caused by fast-moving particles interacting with light and interstellar gas. For this reason, the existence of the formations had previously eluded astronomers.

Experts have already begun to theorize what causes the Fermi bubbles. One idea attributes their origin to particles jetting from the super-massive black hole at the galaxy’s center. Another theory speculates that the structures formed as a result of a burst of gas after a period of rapid star formation.

Researchers and scientists are excited about what the discovery could mean for the future of their fields.

Astronomer David Spergel of Princeton University stated, “Whatever the energy source behind these huge bubbles may be, it is connected to many deep questions in astrophysics.”

To learn more on the significance of such findings, read the article “Designed for Discovery – Part 2: Earth’s Galactic Position Investigated!.”